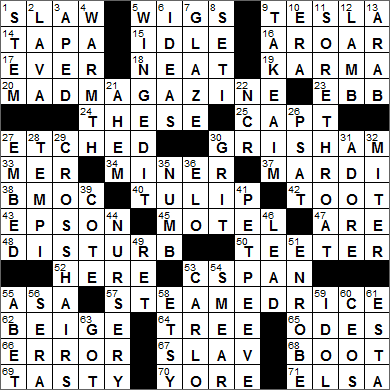 CROSSWORD SETTER: Janice Luttrell
THEME: Pet Peeve … each of today’s themed answers starts with how one might feel when encountering a PET PEEVE:

41D. Personal source of annoyance … which might make one feel the first word of the answers to starred clues PET PEEVE

Today’s Wiki-est, Amazonian Googlies
Across
1. Cabbage side dish SLAW
The term “coleslaw” is an Anglicized version of the Dutch name “koolsla”, which in itself is a shortened form of “Koolsalade” meaning “cabbage salad”.

9. Croatian-born physicist Nikola TESLA
Nikola Tesla was born in modern-day Croatia, but later moved to the US. Tesla’s work on mechanical and electrical engineering was crucial to the development of alternating current technology, the same technology that is used by equipment at the backbone of modern power generation and distribution systems.

14. Spanish appetizer TAPA
“Tapa” is the Spanish word for “lid”, and there is no clear rationale for why this word came to be used for an appetizer. There are lots of explanations cited, all of which seem to involve the temporary covering of one’s glass of wine with a plate or item of food to either preserve the wine or give one extra space at the table.

19. Destiny KARMA
Karma is religious concept with its basis in Indian faiths. Karma embraces the notion of cause and effect. Good deeds have good consequences at some later point in one’s life, future life, or afterlife and vice versa.

20. *Publication featuring Alfred E. Neuman MAD MAGAZINE
Alfred E. Neuman is the mascot of “Mad” magazine, although the image of the smiling, jug-eared youth had been around for decades before the magazine. “Mad” first used the likeness in 1955, and young Mr. Neuman has appeared on the cover of almost every issue of the magazine since then. Neuman’s name was inspired by American composer Alfred Newman, a prolific writer of film scores.

30. “The Firm” author John GRISHAM
“The Firm” is the book that brought John Grisham his first success, although it was the second novel that he wrote. The first was “A Time to Kill”, which garnered a lot more attention after “The Firm” took off. Personally, my favorite of his novels is “Runaway Jury”.

33. Sea, to Cousteau MER
Jacques-Yves Cousteau started off his career in the French Navy, aiming for a working life in aviation. Because of a car accident, Cousteau had to abandon his first career choice and instead went to sea. Famously, he co-invented the Self Contained Underwater Breathing Apparatus (SCUBA), also called the aqua-lung.

37. __ Gras MARDI
“Mardi Gras” translates from French as “Fat Tuesday”, and gets its name from the practice of eating rich foods on the eve of the fasting season known as Lent. Lent starts on the next day, called Ash Wednesday.

40. Garden bulb TULIP
Tulip festivals are held in a few cities around the world. The largest of these is the Canadian Tulip Festival that is held every year in the capital city of Ottawa. The tradition of growing tulips in Ottawa really started at the end of WWII. The Dutch royal family presented the city with 100,000 tulip bulbs as an act of thank for having sheltered Princess Juliana and her children while the Nazis occupied the Netherlands. The first Canadian Tulip Festival took place in 1953.

43. WF-3640 printer maker EPSON
Seiko Epson is a Japanese company, one of the largest manufacturers of printers in the world. The company has its roots in the watch business, roots that go back to 1942. Seiko was chosen as the official timekeeper for the 1964 Summer Olympics in Tokyo and was asked to supply a timer that produced a printed record. This request brought Seiko into the business of printer production. The company developed the world’s first mini-printer for the 1964 Games and called it EP-101 (EP standing for Electronic Printer). In 1975 Seiko introduced the next generation of EP printers which was called EPSON, from “SON of EP”. Cute, huh?

53. Channel covering Capitol Hill C-SPAN
C-SPAN is a privately-funded, nonprofit cable channel that broadcasts continuous coverage of government proceedings. C-SPAN Video Library is an amazing online archive provided by C-SPAN that offers a complete audio and video archive of Congressional proceedings going back to 1987. Users can search the archive for free, by topic, speaker date and more. When the site was launched in 2010, the archive already contained 160,000 hours of programming. There is a is a section of the archive called “Congressional Chronicle” that is particularly easy to navigate.

55. Cute __ button AS A
We use the phrase “cute as a button” over here in North America. When I was growing up on the other side of the Atlantic, we said “bright as a button”. I believe both phrases have the same meaning.

65. Many Keats poems ODES
The poet John Keats is famous for writing a whole series of beautiful odes. The most renowned are the so-called “1819 Odes”, a collection from the year 1819 that includes famous poems such as “Ode on a Grecian Urn”, “Ode to a Nightingale” and “Ode to Psyche”.

67. Balkan native SLAV
The Slavic peoples are in the majority in communities covering over half of Europe. This large ethnic group is traditionally broken down into three smaller groups:

68. Cowpoke’s footwear BOOT
Cowpoke is a term used nowadays for any cowboy, but it was originally limited to the cowboys who prodded cattle onto railroad cars using long poles.

71. “Born Free” lioness ELSA
The life story of Elsa the lion was told by game warden Joy Adamson, who had a very close relationship with the lioness from when Elsa was orphaned as a young cub. Adamson wrote the book “Born Free” about Elsa, and then “Living Free” which tells the story of Elsa and her three lion cubs. In the 1966 film based on “Born Free”, Adamson is played by the talented actress Virginia McKenna.

Down
5. Didn’t follow a script, say WINGED IT
“To wing it” is to improvise, to do something with sufficient preparation. There is some debate about the terms etymology, but I like the idea that it came from the theater. An actor would be described as winging it if he or she learned lines while standing in the wings just before going on stage.

7. Classic Krispy Kreme coating GLAZE
The Krispy Kreme chain of doughnut stores was founded in 1937 in Winston-Salem, North Carolina. The company introduced the Whole Wheat Glazed doughnut in 2007, great for folks looking to eat a healthy diet, I am sure …

8. “The X-Files” org. SETI
SETI is the name given to a number of projects that are searching for extraterrestrial life. The acronym stands for “search for extraterrestrial intelligence”. One of the main SETI activities is the monitoring of electromagnetic radiation (such as radio waves) reaching the Earth in the hope of finding a transmission from a civilization in another world.

“The X-Files” is a very successful science fiction show that aired on the Fox network from 1993 to 2002. The stars of the show are David Duchovny (playing Fox Mulder) and the very talented Gillian Anderson (playing Dana Scully). By the time the series ended, “The X-Files” was the longest running sci-fi show in US broadcast history.

10. Open __: tennis period since 1968 ERA
In the sport of tennis, the Grand Slam tournaments were opened up to professional players, and not just amateurs, in 1968. So, the period since 1968 has been called “The Open Era”.

11. *Cold symptom SORE THROAT
The common cold is caused by a viral infection of the upper respiratory tract. There are over 200 strains of virus that are known to cause the disease.

13. Many an Iraqi ARAB
Iraq is often called the “Cradle of Civilization” as it was home to Sumer, which was the earliest known civilization on the planet. By 5000 BC the Sumerian people were practicing year-round agriculture and had a specialized labor force. For the first time, a whole race were able to settle in one place by storing food, instead of having to migrate in a pattern dictated by crops and grazing land.

22. Big name in ATMs NCR
NCR is an American company that has been in business since 1884, originally called the National Cash Register Company. The company has done well in a market where new technologies seem to be constantly disrupting the status quo.

28. Allegro, scherzo, andante, etc. TEMPI
The tempo of a piece of music is usually designated with an Italian word on the score. For example, “grave” is slow and solemn, “andante” is at a walking pace, “scherzo” is fast and light-hearted, and “allegro” is fast, quickly and bright.

32. Bishop’s headdress MITER
A mitre (also “miter”) is a traditional headdress worn by bishops in some Christian traditions. The name “mitre” comes from a Greek word for “headband, turban”.

39. Sheep shelter COTE
The Old English word “cote” was used for a small house. Our modern word “cottage” comes from “cote”. We now use “cote” to mean a small shelter on a farm for sheep or birds.

41. Personal source of annoyance … which might make one feel the first word of the answers to starred clues PET PEEVE
The phrase “pet peeve”, meaning “thing that provokes one most”, seems to be somewhat ironic. A “peeve” is a source of irritation, and the adjective “pet” means “especially cherished”.

53. Monte __: gambling mecca CARLO
Monte Carlo is an administrative area in the Principality of Monaco that covers just under a quarter of a square mile. The area is known in particular as the location of the famous Monte Carlo Casino. “Monte Carlo” translates as “Mount Charles”, and was named in 1866 for Charles III of Monaco who was ruling the principality at the time.

55. Aid in wrongdoing ABET
The word “abet” comes into English from the Old French “abeter” meaning “to bait” or “to harass with dogs” (it literally means “to make bite”). This sense of encouraging something bad to happen morphed into our modern usage of “abet” meaning to aid or encourage someone in a crime.

56. Doris Day song word SERA
As Doris Day told us, “que sera sera” is Spanish for “whatever will be, will be”.

58. Online handicraft market ETSY
Etsy.com is an e-commerce website where you can buy and sell the kind of items that you might find at a craft fair.