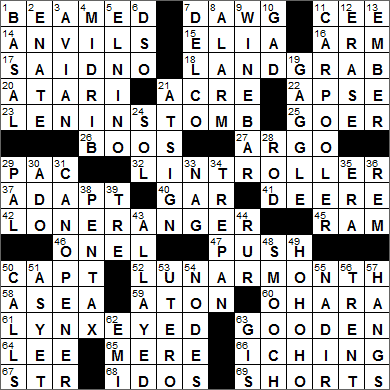 CROSSWORD SETTER: Gerry Wildenberg
THEME: Vowel Progression … each of today’s themed answers starts with an L, followed by a vowel, followed by an N. That vowel progresses from A through to Y as we progress down the grid:

Today’s Wiki-est, Amazonian Googlies
Across
7. “Hi and Lois” pooch DAWG
“Hi and Lois” is a comic strop that first appeared in 1954 and is still running today. The strip was created by Mort Walker (also known for “Beetle Bailey”) and was originally illustrated by Dik Browne (also known for “Hägar the Horrible”). The title characters Hi and Lois Flagstone first appeared in “Beetle Bailey”. Lois is Beetle’s sister, and the characters occasionally show up in each other’s strip.

15. Literary pen name ELIA
Charles Lamb published a famous collection of essays simply entitled “Essays of Elia”. Elia was actually a clerk and co-worker of Charles Lamb, whereas Lamb was the author.

20. Video game pioneer ATARI
At one point, the electronics and video game manufacturer Atari was the fastest growing company in US history. However, Atari never really recovered from the video game industry crash of 1983.

21. Unit to plow ACRE
At one time, an acre was defined as the amount of land a yoke of oxen could plow in a day. This was more precisely defined as a strip of land “one furrow long” (i.e. one furlong) and one furlong wide. The length of one furlong was equal to 10 chains, or 40 rods. A area of one furlong times 10 rods was one rood.

22. Church section near the altar APSE
The apse of a church or cathedral is a semicircular recess in an outer wall, usually with a half-dome as a roof and often where there resides an altar. Originally apses were used as burial places for the clergy and also for storage of important relics.

23. Red Square shrine LENIN’S TOMB
I made it to Russia only once in my life, and it was a memorable trip. I saw all the sites in and around Red Square in Moscow, but couldn’t get in to visit Lenin’s Tomb. It was closed for renovations …

27. Golden Fleece ship ARGO
In Greek mythology, Jason and the Argonauts sailed on the Argo in search of the Golden Fleece. The vessel was called the “Argo” in honor of the ship’s builder, a man named Argus.

In Greek mythology, Helle and Phrixus were a twin sister and brother who appeared in the story of Jason and the Argonauts. Phrixus was set to be sacrificed, but instead he and Helle were rescued by a flying golden ram dispatched by their mother. Helle fell off the back of the flying ram to her death, but Phrixus survived and took the golden fleece from the ram. It was this Golden Fleece that Jason sought with his Argonauts.

29. Campaign funding org. PAC
A Political Action Committee (PAC) is a private group that works to influence the outcome of a particular election or group of elections. Any group becomes a PAC by law when it receives or spends more than $1,000 for the purpose of influencing the outcome of an election. In 2010 the Supreme Court ruled that PACS that did not make direct contributions to candidates or parties could accept unlimited contributions. These “independent-expenditure-only committees” are commonly referred to as “super PACs”.

40. Long-jawed fish GAR
The fish known as a gar is very unusual in that it is often found in very brackish water. What is interesting about gar is that their swim bladders are vascularized so that they can actually function as lungs. Many species of gar can actually be seen coming to the surface and taking a gulp of air. This adaptation makes it possible for them to live in conditions highly unsuitable for other fish that rely on their gills to get oxygen out of the water. Indeed, quite interesting …

41. Farm machinery giant DEERE
John Deere invented the first commercially successful steel plow in 1837. Prior to Deere’s invention, farmers used an iron or wooden plow that constantly had to be cleaned as rich soil stuck to its surfaces. The cast-steel plow was revolutionary as its smooth sides solved the problem of “stickiness”.

61. Sharp-sighted LYNX-EYED
A lynx is a wild cat, of which there are four species. These are:

– The Eurasian lynx: the biggest of the four species.
– The Canada lynx: well-adapted to life in cold environments.
– The Iberian lynx: a native of the Iberian Peninsula in Southern Europe, and the most endangered cat species in the world.
– The Bobcat: our North American wildcat, the smallest of the four lynx

63. ’80s-’90s Mets pitcher nicknamed “Dr. K” GOODEN
Dwight Gooden is a former professional baseball pitcher, with the nickname “Dr. K”. “Dr. K” is a reference to the standard abbreviation for “strikeout”, a “K”.

64. Stan of Marvel Comics LEE
Stan Lee did just about everything at Marvel Comics over the years, from writing to being president and chairman of the board. If you like superhero movies based on the characters from Marvel Comics, then you could spend a few hours trying to spot Stan Lee in those films as he has a penchant for making cameo appearances. Lee can be spotted in “X-Men” (2000), “Spider-Man” (2002), “Hulk” (2003), “Fantastic Four” (2005), “Iron Man” (2008) and many other films.

66. Ancient Chinese divination text I CHING
The “I Ching” is an ancient Chinese text dating back to the 2nd millennium BC. The text deals with aspects of cosmology and divination, and perhaps served as a guide for making predictions of the future. The statements in the “I Ching” consist of 64 hexagrams, sets of six lines composed in horizontal stacks.

5. Weather-affecting phenomenon EL NINO
When the surface temperature of the Pacific Ocean rises or falls more that half a degree centigrade, then there is said to be an El Niño episode. That small temperature change in the Pacific has been associated with climatic changes that can stretch right across the globe. El Niño is Spanish for “the boy” and is a reference to the Christ child. It was given this Spanish name because the warming is usually noticed near South America and around Christmas-time.

6. Brit. military decoration DSO
The Distinguished Service Order (DSO) is a British military award that is usually presented to officers with the rank of Major or higher.

7. Big name in auto parts DELCO
Delco Electronics took its name from Dayton Engineering Laboratories Company. Delco is often seen in the brand name “ACDelco”. The AC stands for Albert Champion, famous for his work to develop the spark plug.

9. Place to get a Cab WINE BAR
The Cabernet Sauvignon grape has been around since the 17th century, and is the result of a chance crossing in southwestern France of the Cabernet franc and Sauvignon blanc grapes.

10. Wander (about) GAD
“To gad about” is to move around with little purpose. The word “gad” comes from the Middle English “gadden” meaning “to hurry”.

19. Honkers on the ground GAGGLE
A collection of geese is referred to as a “gaggle” when on the ground. When geese are in v-formation in flight, they are referred to collectively as a “skein”.

21. Punctuation in email addresses AT-SIGN
The “at symbol” (@) originated in the commercial word, as shorthand for “each at, per” and similar phrases. I suppose we see the symbol most commonly these days as part of all email addresses.

24. Costa del __ SOL
Spain’s Costa del Sol (“Coast of the Sun”) is in Andalusia in the South of Spain. It lies sandwiched between two other “costas”, the Costa de la Luz and the Costa Tropical. The city of Malaga is on the Costa del Sol, as well as the famous European tourist destinations of Torremolinos and Marbella. The Costa del Sol was made up of sleepy little fishing villages until the 1980s when the European sunseekers descended on the region. I wouldn’t recommend it for a holiday quite frankly …

28. “The Twilight Zone” creator Serling ROD
Rod Serling was the man behind, and in front of, the iconic science-fiction TV series “The Twilight Zone”. Serling used a lot of the shows he created to advance his strongly held views against war (he was a soldier in WWII), against racism, and against censorship.

34. Rock-boring drill TREPAN
A trepan is a boring tool used to sink mineshafts.

36. Dream letters REM
REM is an acronym standing for Rapid Eye Movement sleep. REM sleep takes up 20-25% of the sleeping hours and is the period associated with one’s most vivid dreams.

43. Ameliorated ALLAYED
“To ameliorate” is to make better, and comes to us from French. The French for “better” is “meìlleur”.

44. Play about robots RUR
Karel Čapek was a Czech writer noted for his works of science fiction. Čapek’s 1920 play “R.U.R.” is remembered in part for introducing the world to the word “robot”. The words “automaton” and “android” were already in use, but Capek gave us “robot” from the original Czech “robota” meaning “forced labor”. The initialism “R.U.R.”, in the context of the play, stands for “Rossum’s Universal Robots”.

53. Unborn, after “in” UTERO
“In utero” is a Latin term meaning “in the uterus”. The Latin “uterus” translates as both “womb” and “belly”. The Latin word was derived from the Greek “hystera” also meaning womb, which gives us the words “hysterectomy”, and “hysterical”.

56. Lott from Mississippi TRENT
Trent Lott was raised Democrat in Mississippi, but served in Congress as a Republican. Lott ran into trouble for remarks he made that were interpreted as being racially motivated, and ended up resigning in 2007.

62. Brit. recording giant EMI
EMI was a British music company, with the abbreviation originally standing for Electric and Musical Industries.

63. Enlistees, briefly GIS
The initials “G.I.” stand for “Government Issue” and not “General Infantry” as is often believed. GI was first used in the military to denote equipment made from Galvanized Iron and during WWI, incoming German shells were nicknamed “GI cans”. Soon after, the term GI came to be associated with “Government Issue” and eventually became an adjective to describe anything associated with the Army.