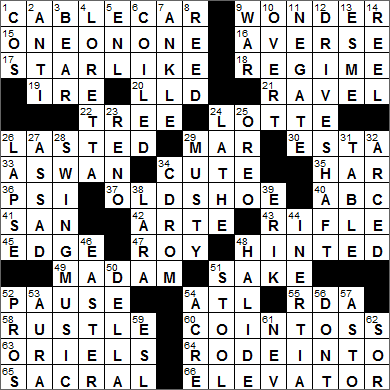 CROSSWORD SETTER: Timothy L. Meaker
THEME: Elevator at the End … each of today’s themed answers ends with a word than often follows ELEVATOR:

66A. Office building feature, which can precede the ends of the answers to starred clues ELEVATOR

Today’s Wiki-est, Amazonian Googlies
Across
1. *Subject of a San Francisco museum CABLE CAR (giving “elevator car”)
The Cable Car Museum in San Francisco is a little special in that it is housed in the same complex as the city’s cable car power house. While touring the museum, visitors can look out over the power house and see the huge haulage cables heading out to the streets to pull the cars up all of those steep hills.

20. Honorary law deg. LLD
The honorary degree of Legum Doctor (LL.D.) translates from the Latin as Doctor of Laws, a plural. This practice of using the plural originated in Cambridge University in England, as one was awarded an LL.D. after having been taught both Canon Law and Civil Law.

21. Debussy contemporary RAVEL
Maurice Ravel was a great French composer of the Romantic Era. His most famous piece of music by far is his “Bolero”, the success of which he found somewhat irksome as he thought it to be a trivial work. Personally though, I love minimalism and simplicity …

22. December purchase for many TREE
The custom of decorating trees at Christmas seems to have originated in Renaissance Germany. Those first trees were placed in guildhalls and were decorated with sweets and candy for the apprentices and children. After the Protestant Reformation, the Christmas tree became an alternative in Protestant homes for the Roman Catholic Christmas cribs. The Christmas tree tradition was imported into Britain by the royal family because of its German heritage. That tradition spread from Britain into North America.

24. Singer Lenya married to Kurt Weill LOTTE
Lotte Lenya was an Austrian singer and actress. She was married to composer Kurt Weill, and was noted for her performances of his works. Late in her career she played Rosa Klebb, one of the main villains in the 1963 Bond movie “From Russia With Love”. Klebb was the character who had the knife that popped out from the toe of her shoe.

33. Egyptian city on the Nile ASWAN
The Egyptian city of Aswan lies in the south of the country, on the River Nile. Aswan is famous for its stone quarries, going back to ancient times. The most celebrated granite rock from the area is called syenite. Stone from Aswan was shipped northwards along the Nile and used in the construction of the pyramids.

36. Deflategate letters PSI
Deflategate is the name given to accusations that someone associated with the New England Patriots supplied under-inflated balls for NFL games to give Patriots an advantage. The NFL suspended Patriots quarterback Tom Brady for four games for his involvement, and fined the Patriots $1 million.

37. *Unpretentious OLD-SHOE (giving “elevator shoe”)
“Old shoe” is an informal term for someone or something that is familiar and comfortable.

41. __ Andreas Fault SAN
The famous San Andreas Fault in California lies along the boundary between the Pacific and North American tectonic plates. The faultline was named in 1885 after a small lake just south of San Francisco called Laguna de San Andreas.

42. Works in un museo ARTE
In Spanish, one sees works of art (arte) in a museum (un museo).

43. M16, for one RIFLE
The M16 is a modified version of the ArmaLite Ar-15 rifle that is specially produced for the US military. The US military started using the M16 in 1963 during the Vietnam War, although it has largely been replaced by the M4 carbine, which is shorter and lighter.

47. Half a Western couple ROY
Cowboy actor and singer Roy Rogers’ real name was Leonard Franklin Slye, and his nickname was “King of the Cowboys”. Roy Rogers married Dale Evans in 1947. Evans’ nickname was “Queen of the West”.

51. Fermented beverage usually served warm SAKE
We refer to the Japanese alcoholic beverage made from rice as “sake”. We’ve gotten things a bit mixed up in the West. “Sake” is actually the word that the Japanese use for all alcoholic drinks. What we know as sake, we sometimes refer to as “rice wine”. It is indeed made from rice, but it is a brewed rather than fermented and so is more like a beer than a wine.

63. Bay windows ORIELS
An oriel window is a bay window that projects from a wall, but does not reach all the way to the ground.

4. Lynn with the album “I Remember Patsy” LORETTA
The singer Loretta Lynn is sometimes referred to as the First Lady of Country Music. Lynn was born in 1932 in Butcher Hollow, Kentucky to a coal miner and his wife, and so famously is also referred to as “the Coal Miner’s Daughter”. Her much younger sister (by 19 years) is the singer Crystal Gayle.

The album “I Remember Patsy” is a tribute to Patsy Cline that was recorded by Loretta Lynn in 1977.

8. Sax, e.g. REED
The saxophone was invented by Belgian Adolphe Sax. Sax developed lip cancer at one point in his life, and one has to wonder if his affliction was related to his saxophone playing (I am sure not!). I had the privilege of visiting Sax’s grave in the Cemetery of Montmartre in Paris a few years ago.

13. Salinger title 13-year-old ESME
J. D. Salinger wrote a short story called “For Esmé – with Love and Squalor”, originally published in “The New Yorker” in 1950. It is a story about a young English girl called Esme and an American soldier, and is set in WWII.

23. Clinton’s attorney general RENO
Janet Reno was Attorney General of the US from 1993 to 2001. Reno was the person to hold the office second longest, and was our first female Attorney General. In 2002, Reno ran for Governor of Florida but failed to win the Democratic nomination. Thereafter she retired from public life.

25. Longtime Hydrox competitor OREO
The Oreo cookie was first introduced in 1912. The Oreo was intended to be a competitor to the very similar Hydrox cookie which had debuted four years earlier. The Oreo won the resulting battle on the grocery store shelves …

27. Syrian leader ASSAD
Dr. Bashar al-Assad is the current President of the Syrian Arab Republic and the son of the former President Hafez al-Assad whom he replaced in 2001. President Assad is a medical doctor, speaks fluent English and conversational French. Assad was studying ophthalmology in London when he met his wife, who is an Englishwoman.

34. Data storage medium CD-ROM
CD-ROM stands for “compact disc read only memory”. The name indicates that you can read information from the disc (like a standard music CD for example), but you cannot write to it. You can also buy a CD-RW, which stands for “compact disc – rewritable”, with which you can read data and also write over it multiple times using a suitable CD drive.

39. Composer Satie ERIK
Erik Satie was a French composer most famous for his beautiful composition, the three “Gymnopédies”. I have tried so hard to appreciate other works by Satie but I find them so very different from the minimalist simplicity of the lyrical “Gymnopédies”.

48. Silver __, compound used in film HALIDE
In black and white photography, photographic film and paper both contain tiny silver halide crystals in a layer of emulsion. If the silver ion in the halide is exposed to light then it is converted from an ion into metallic silver. Visually there is no difference at this stage between the light-exposed and unexposed parts of the film/paper. When a liquid developer (such as amidol) is applied, then the metallic silver is reduced, turning the silver into metallic crystals that make up the dark areas of the exposed film or paper. A solution known as a “fixer” is then used to remove unexposed silver halide, hence rendering the image insensitive to further action by light.

59. Immigrant’s subj. ESL
English as a Second Language (ESL) is sometimes referred to as English for Speakers of Other Languages (ESOL) and English as a Foreign Language (EFL).