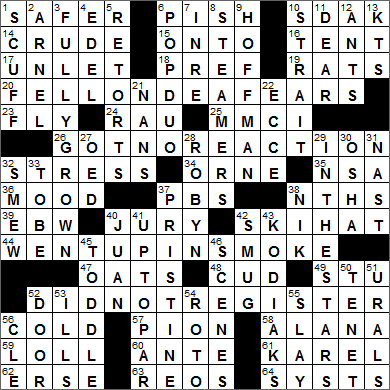 Today’s Wiki-est, Amazonian Googlies
Across
6. “Poppycock!” PISH!
It is thought that the relatively gentle term “poppycock”, meaning “nonsense”, comes from a Dutch word for “dung” combined with a Latin word for “excrete”. Not so gentle after all …

10. Badlands Natl. Park site SDAK
Badlands may be “bad lands” for agriculture, but they can be beautiful. A badlands is an extensive area from which the topsoil has been eroded by wind and water, leaving exposed rock and very little vegetation. One of the most beautiful badlands areas in the US is preserved for the nation as South Dakota’s Badlands National Park.

16. Pup follower? TENT
A pup tent is a small ridge tent, meant for use by 2-3 people. The term “pup tent” has been around since the mid-1800s. A pup tent was sometimes called a dog tent.

19. “Willard” antagonists RATS
“Willard” is an “icky” horror movie from 1971. The title character is a loner who develops a relationship with rats, and of course they get way out of control. One of Willard’s rats is named Ben, and Ben rates his own sequel that was released the next year. The most memorable thing about the sequel is the title song by Michael Jackson.

24. Indian author Santha Rama __ RAU
Santha Rama Rau was a travel writer from India who lived much of her life in the US. As well as writing her own books, Rau also adapted for the stage the E. M. Forster novel “A Passage to India”.

34. Normandy river ORNE
Orne is a department and river in the northwest of France. Perhaps one of the most famous locations in Orne is the village of Camembert, the home of the famous (and delicious!) cheese.

35. “Defending Our Nation. Securing The Future” org. NSA
The National Security Agency (NSA) was set up in 1952 by President Truman, a replacement for the Armed Forces Security Agency that had existed in the Department of Defense since 1949. The NSA has always been clouded in secrecy and even the 1952 letter from President Truman that established the agency was kept under wraps from the public for over a generation. I really like the organization’s nickname … “No Such Agency”.

37. “POV” airer PBS
“POV” is a PBS television series that showcases independent documentary films. “POV” has been on the air since 1988.

39. “The Trumpet of the Swan” monogram EBW
Elwyn Brooks (E. B.) White was an American writer. His most famous creations were the children’s stories “Charlotte’s Web” and “Stuart Little”, but he also co-authored the writing guide “The Elements of Style” (usually referred to as “Strunk & White”).

42. Vail topper SKI HAT
The Vail Ski Resort in Colorado is the largest single-mountain ski resort in the whole country. The resort was opened in 1962, basically in the middle of nowhere. It was given the name Vail after Vail Pass which runs by the mountain (now also called Vail Mountain). The town of Vail, Colorado was established four years later in 1966, and now has a population of about 5,000.

47. Part of a friskiness metaphor OATS
Traditionally, wild oats was a crop that one would regret sowing instead of “good grain”. Young and tempestuous people were rash enough to sow their wild oats, and had yet to comprehend their folly. Over time, to “feel one’s oats” came to mean “be lively and confident”.

48. Jersey’s chew CUD
Ruminants are animals that “chew the cud”. Ruminants eat vegetable matter but cannot extract any nutritional value from cellulose without the help of microbes in the gut. Ruminants collect roughage in the first part of the alimentary canal, allowing microbes to work on it. The partially digested material (the cud) is regurgitated into the mouth so that the ruminant can chew the food more completely exposing more surface area for microbes to do their work.

49. “The Simpsons” leisure suit wearer STU
On television’s “The Simpsons”, the character of Disco Stu is voiced by Hank Azaria, although Stu was voiced for a while by the late Phil Hartman. Disco Stu is described as “a black, wrinkly John Travolta”.

57. Lightest meson PION
A meson is an unstable subatomic particle, made up of one quark and one antiquark.

58. Ex-TV host Stewart ALANA
Alana Stewart is a former model and actress. She had two famous husbands, but both marriages ended in divorce. Her first husband was actor George Hamilton, and her second was rock star Rod Stewart.

61. “R.U.R.” writer Capek KAREL
Karel Čapek was a Czech writer noted for his works of science fiction. Čapek’s 1920 play “R.U.R.” is remembered in part for introducing the world to the word “robot”. The words “automaton” and “android” were already in use, but Capek gave us “robot” from the original Czech “robota” meaning “forced labor”. The acronym “R.U.R.”, in the context of the play, stands for “Rossum’s Universal Robots”.

63. Old Royale 8’s REOS
The REO Motor Company was founded by Ransom E. Olds (hence the name REO). The company made cars, trucks and buses, and was in business from 1905 to 1975 in Lansing, Michigan. Among the company’s most famous models were the REO Royale and the REO Flying Cloud.

6. The Carpenters, e.g. POP DUO
Karen Carpenter was an accomplished drummer, although she only started playing drums in high school, as a member of the school band. After she graduated she started playing jazz with her brother, Richard, and a college friend. Later, she and Richard played with a group called Spectrum, and submitted many demo tapes to recording companies, but all were unsuccessful. Finally, Karen and Richard got a recording contract with A&M Records, and when they had Karen take the lead on their songs, they hit the big time and toured as the Carpenters. Sadly, Karen passed away at only 32-years-old, dying from heart failure brought on by anorexia.

11. Word John doesn’t want to see? DEAR
Apparently the term “Dear John letter” originated in WWII among American troops who were serving abroad. The servicemen highly valued letters from girlfriends and wives back home, and almost invariably those missives started out with “Dearest”, or “My Darling” or some other expression of affection. A curt, “Dear John” set the tone for a letter which was likely to contain news of a new love interest in the life of the girlfriend or wife.

13. Lapidary’s meas. KTS
A karat (also “carat”, the spelling outside of North America) is a measure of the purity of gold alloys, with 24-karat representing pure gold.

A lapidary is an artist who works with gemstones to make decorative jewelry items. The term ultimately derives from the Latin “lapis” meaning “stone”.

21. Some flatbreads NANS
Naan (also “nan”) bread is very popular in Indian restaurants, as well as in other West, Central and South Asian cuisines. Indian Naan is traditionally baked in a clay oven known as a tandoor.

22. Nero’s “Behold!” ECCE!
The Roman emperor Nero had quite the family life. When Nero was just 16-years-old he married his stepsister, Claudia Octavia. He also had his mother and step-brother executed.

27. Ref. shelf filler OED
The “Oxford English Dictionary” (OED) contains over 300,000 “main” entries and 59 million words in total. It is said it would take a single person 120 years to type it out in full. The longest entry for one word in the second edition of the OED is the verb “set”. When the third edition was published in 2007, the longest entry for a single word became the verb “put”. Perhaps not surprisingly, the most-quoted author in the OED is William Shakespeare, with his most quoted work being “Hamlet”. The most-quoted female author is George Eliot (aka Mary Ann Evans).

28. Singer Rihanna’s first name ROBYN
The singer Rihanna was born and grew up on the island of Barbados and moved to the US when she was 16-years-old to pursue a singing career. “Rihanna” is her stage name, as she was born Robyn Rihanna Fenty. The name “Rihanna” is derived from the Welsh name “Rhiannon”.

30. Workers’ rights org. OSHA
The Occupational Safety and Health Administration (OSHA) was created in 1970 during the Nixon administration. OSHA regulates workplaces in the private sector and regulates just one government agency, namely the US Postal Service.

31. Tweed lampooner NAST
Thomas Nast was an American caricaturist and cartoonist. Nast was the creator of the Republican Party elephant, the Democratic Party’s donkey, Uncle Sam and the image of the plump and jocular Santa Claus that we use today. Thomas Nast drew some famous cartoons in which he depicted the Tammany Society as a vicious tiger that was killing democracy. Nast’s use of the tiger symbology caught on and was used by other cartoonists to harp at the society.

32. Drake, maybe SMEW
The smew is a beautiful-looking species of duck found right across northern Europe and Asia. The smew requires trees to complete its breeding cycle as it nests in tree holes, such as old woodpecker nests.

33. Start of a dramatic question TO BE …

37. Like new snow PRISTINE
Something described as “pristine” has its original purity, is uncorrupted.

40. Evita’s man JUAN
Eva Perón was the second wife of President Juan Perón who was in office from 1946 to 1955. The Argentine First Lady was known affectionately by the people as “Evita”, the Spanish language diminutive of “Eva”. “Evita” was also the follow-up musical to “Jesus Christ Superstar” for Andrew Lloyd Webber and Tim Rice, and was based on the life of Eva Perón.

43. Grizzly Alaskans? KODIAKS
Brown bears are found over much of northern Europe, Asia, and North America. The biggest subspecies of brown bear is the Kodiak Bear, the largest land-based predator in the world. The Kodiak grows to about the same size as the enormous polar bear.

50. Principle TENET
A tenet is an article of faith, something that is held to be true. “Tenet” is Latin for “he holds”.

51. Dividing range URALS
The eastern side of the Ural Mountains in Russia is generally regarded as the natural divide between the continents of Europe and Asia.

54. Till opener ROTO-
Rototill is a brand name of a small rotary hoe used in domestic gardens.