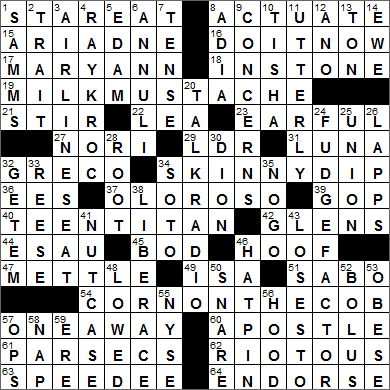 Today’s Wiki-est, Amazonian Googlies
Across
15. Bride of Dionysus ARIADNE
In Greek mythology, Ariadne was the daughter of Minos, the King of Crete and master of the Minotaur. Minos charged his daughter with control of the labyrinth that housed the Minotaur. However, Ariadne fell in love with Theseus who had vowed to kill the Minotaur, and she helped him fulfill his mission. In other myths, Ariadne became the bride of the god Dionysius.

The iconic sitcom “Gilligan’s Island” ran for only three seasons, although that added up to a total of 98 episodes. The show is about a small band of castaways who are trying to escape their island and return to Hawaii. The last episode originally aired in 1967. The castaways did eventually get off the island in a 1978 TV movie called “Rescue from Gilligan’s Island”, but ended up back on the island at the end of the film.

So often in literature, the movies and on stage, there is an innocent woman at the the center of the story. Such stock characters came to be known as ingénues, a term derived from the French adjective “ingénu” meaning innocent, virtuous, candid and “ingenuous”.

19. Telltale facial mark MILK MUSTACHE
A milk mustache is a sure indicator that a person has drunk some milk.

21. The clink STIR
The slang word “stir”, meaning a prison, probably has its roots in Start Newgate prison in London, where it was a nickname for the establishment.

The Clink (also “the Clynke”) was a celebrated prison in Southwark, England owned by the Bishop of Winchester. The prison was given the name “the clink”, probably from the sound made by metal keys in metal locks and metal chains around ankles. The prison was closed down in 1780, and around the same time “clink” entered the English language as a slang term for “jail”.

27. Japanese food item sold in sheets NORI
Nori is an edible seaweed that we used to know as “laver” when I was living in Wales. Nori is usually dried into thin sheets. Here in the US, we are most familiar with nori as the seaweed used as a wrap for sushi.

31. Selene’s Roman counterpart LUNA
“Luna” is the Latin word for “moon”, and is the name given to the Roman moon goddess. The Greek equivalent of Luna was Selene. Luna had a temple on the Aventine Hill in Rome but it was destroyed during the Great Fire that raged during the reign of Nero.

32. El __ GRECO
“El Greco” (“the Greek”, in Spanish) was the nickname of the artist whose real name was Domenikos Theotokopoulos. El Greco was born in Crete in 1541, and moved to Venice to study art when he was in his early twenties. A few years later he moved to the city of Toledo in central Spain, where he lived and worked for the rest of his life.

37. Medium-dry sherry OLOROSO
“Oloroso” is the Spanish word for “scented, fragrant”. It is used to describe a sherry that is usually dark and nutty, characteristics brought on by oxidative aging.

39. Political initials since 1884 GOP
The Republican Party has had the nickname Grand Old Party (GOP) since 1875. That said, the phrase was coined in the “Congressional Record” as “this gallant old party”. The moniker was changed to “grand old party” in 1876 in an article in the “Cincinnati Commercial”. The Republican Party’s elephant mascot dates back to an 1874 cartoon drawn by Thomas Nast for “Harper’s Weekly”. The Democrat’s donkey was already an established symbol. Nast drew a donkey clothed in a lion’s skin scaring away the other animals. One of the scared animals was an elephant, which Nast labeled “The Republican Vote”.

44. Twin seen in a thesaurus? ESAU
The letter sequence ESAU can be found inside the word “thesaurus”.

Esau, was the grandson of Abraham and the twin brother of Jacob, the founder of the Israelites. When Esau was born to Isaac and Rebekah, the event was described, “Now the first came forth, red all over like a hairy garment”. Esau is portrayed later in life as being very different from his brother, as a hunter and someone who loves the outdoor life.

47. Grit METTLE
“Mettle” is such a lovely word. It means courage and fortitude, or spirit. “Mettle” is simply a variant spelling of the word “metal”.

49. First bk. of the Latter Prophets ISA
The Book of Isaiah is part of the Hebrew Bible and the Christian Old Testament. Isaiah is not mentioned in the Qur’an, but many Muslim scholars consider Isaiah a prophet.

51. 1988 N.L. Rookie of the Year Chris SABO
Chris Sabo is a former third baseman who played for the Reds, Orioles, White Sox and Cardinals.

60. John or Paul APOSTLE
In the Christian tradition, John the Apostle was one of the twelve followers of Jesus who were called the Apostles. John lived longer than all of the other Apostles and was the only one who did not die a martyr. John wrote the Gospel of John in the New Testament, as well as three Epistles of John and the Book of Revelation.

61. Astronomical measures PARSECS
A parsec is a measure of length or distance used in astronomy. One parsec is equal to about 19.2 trillion miles.

63. Original McDonald’s mascot SPEEDEE
McDonald’s really popularized the concept of “fast food” when they introduced their Speedee Service System in 1948. Soon after, the company introduced its first mascot, a man with a hamburger head called Speedee. Speedee was replaced with Ronald McDonald in 1967.

Down
1. “Dynasty” actress Emma SAMMS
Emma Samms is a British actress, best known for her roles in soap operas. She played Holly Sutton on the daytime drama “General Hospital”, and was the second actress to play Fallon Carrington Colby on the primetime soap “The Colbys”, a spinoff of “Dynasty”.

“Dynasty” was ABC’s shot at CBS’s incredibly successful soap opera “Dallas”. Both shows were centered on wealthy oil families, with “Dynasty” starring John Forsythe and Linda Evans in the lead roles. The show didn’t really make much impact on the viewing figures for “Dallas” until season two, when Joan Collins joined the cast as the scheming ex-wife Alexis. “Dynasty” had a very successful run then, from 1981 to 1989.

5. Red-coated wheel EDAM
Edam cheese takes its name from the Dutch town of Edam in North Holland. The cheese is famous for its coating of red paraffin wax, a layer of protection that helps Edam travel well and prevents spoiling. You might occasionally come across an Edam cheese that is coated in black wax. The black color indicates that the underlying cheese has been aged for a minimum of 17 weeks.

6. Trees’ age indicators ANNULI
The growth rings on the cross section of a tree are also known as “annuli” (singular “angulus”).

8. Sarah McLachlan hit ADIA
Sarah McLachlan is singer/songwriter from Halifax, Nova Scotia who lives in Vancouver. In 1997, McLachlan married Ashwin Sood, the drummer in her band. Apparently the 1998 hit song “Adia”, that she co-wrote and recorded, was intended as an apology to her best friend … for stealing her ex-boyfriend and then marrying him!

10. “My Wife & Kids” co-star __ Campbell-Martin TISHA
Tisha Campbell is an actress best-known for her supporting role on the HBO sitcom “Martin” that features Martin Lawrence.

14. Common rebus pronoun EWE
The letters EWE might be used to represent the pronoun “you”, as both words sound the same.

A rebus is a representation of a word in the form of symbols, letters or perhaps a picture. A rebus crossword is one in which some squares are replaced with a symbol or picture (although we often use multiple letters when solving).

26. People now known as Sami LAPPS
Lapland is a geographic region in northern Scandinavia, largely found within the Arctic Circle. Parts of Lapland are in Norway, Sweden and Finland. The people who are native to the region are called the Sami people. The Sami don’t like to be referred to as “Lapps” and they regard the term as insulting.

30. “Falling Into You” Grammy winner DION
French-Canadienne singer Céline Dion first came to international attention when she won the 1988 Eurovision Song Contest, in which she represented Switzerland in the competition that was hosted in Dublin, Ireland.

38. Ring-wearing pianist LIBERACE
The flamboyant pianist’s full name was Wladziu Valentino Liberace. Liberace was born in a suburb of Milwaukee into a Polish-Italian family. There used to be a Liberace Museum in Las Vegas, but sadly it closed in 2010 after 31 years in operation.

46. Millinery accessory HATPIN
A milliner is someone who makes, designs or sells hats. Back in the 1500s, the term described someone who sold hats made in Milan, Italy, hence the name “milliner”.

50. Drum kit item SNARE
Snare drums are so called because they have a set of wire strands (called snares) stretched across the bottom surface of the drum. When the drum is struck, the snares vibrate against the bottom drumhead producing a unique sound.

52. Big pill BOLUS
The term “bolus” is used for a soft lump, especially of chewed food. The same term is used for a particularly large pill or mass of medicinal material.

53. Like one contemplating bariatric surgery OBESE
“Bariatrics” is an area in medicine concerned with obesity. The term was coined in the mid-sixties, and comes from the Greek prefix “bar-” meaning “weight”.

“The Merry Wives of Windsor” is one of William Shakespeare’s comedies, and perhaps the most farcical of all his works. The main character is Sir John Falstaff, an overweight and jocular character intent on seducing one of the “merry wives”. The Windsor in the title is the Windsor Castle just outside London that is now a favored residence of Queen Elizabeth II.