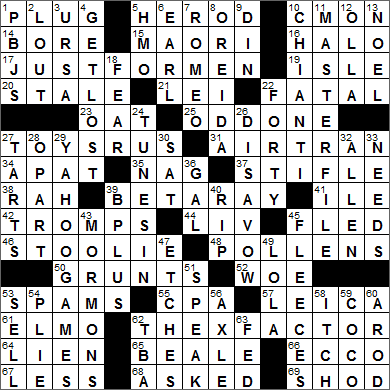 CROSSWORD SETTER: C.C. Burnikel
THEME: The X-Factor … the last word in each of today’s themed answers is often preceded by the letter X:

62A. Hard-to-define element, or a hint to what can precede each last word in answers to starred clues THE X-FACTOR

Today’s Wiki-est, Amazonian Googlies
Across
5. Judean king HEROD
Herod Agrippa was the grandson of Herod the Great, and like his grandfather was a Roman client king of Judea. It is thought that Herod Agrippa is the “Herod” mentioned in the Bible’s “Acts of the Apostles”, the king who imprisoned Peter and who had killed James son of Zebedee. Agrippa’s grandfather was the King Herod who ordered the Massacre of the Innocents described in the Gospel of Matthew. This was Herod’s attempt to kill the young Jesus by ordering the murder of all boys aged two or younger in Bethlehem and vicinity.

15. Native New Zealanders MAORI
The Māori are the indigenous people of New Zealand. The Māori are eastern Polynesian in origin and began arriving in New Zealand relatively recently, starting sometime in the late 13th century. The word “māori” simply means “normal”, distinguishing the mortal human being from spiritual entities.

17. *Guys’ hair coloring product JUST FOR MEN (giving “X-Men”)
Just for Men is a hair-coloring product. It is usually applied to remove gray in the hair, and is effective for one to six weeks. So they tell me …

21. Maui memento LEI
“Lei” is the Hawaiian word for “garland, wreath”, although in more general terms a “lei” is any series of objects strung together as an adornment for the body.

Maui is the second largest of the Hawaiian islands. Maui is sometimes called the “Valley Isle” as it is composed of two volcanoes to the northwest and southeast of the island, each with numerous beautiful valleys carved into them.

– Steel-cut oats, sometimes called “Irish oats”, are groats that have been chopped into chunks about the size of sesame seeds.
– Stone-ground oats, sometimes called “Scottish oats”, have been ground into smaller pieces, about the size of poppy seeds.
– Old-fashioned rolled oats are made by first steaming the toasted groats, and then rolling them into flakes.
– Quick-cooking oats are similar to rolled oats, but thinner flakes.
– Instant oats have been chopped, rolled, pre-cooked, dehydrated and often have salt and sugar added.

27. Chain with headquarters at One Geoffrey Way, Wayne, N.J. TOYS “R” US
Geoffrey the Giraffe (formerly “Dr. G. Raffe”) is the mascot of the Toys “R” Us store. Dr. G. Raffe made his debut in 1957 in an advertising campaign for Children’s Bargain Town. Raffe’s catchphrase was ‘Toys “R” us’. The catchphrase became so popular, that Children’s Bargain Town changed its name in 1969.

31. Former Southwest subsidiary AIRTRAN
AirTran Airways was a budget airline that has its principal hub in Atlanta. The company was founded in 1993 as ValuJet Airlines. AirTran had been owned by Southwest Airlines since 2010, and was fully integrated into the parent company in 2014, when the AirTran brand was shelved.

39. *Radioactive emission BETA RAY (giving “X-ray”)
Beta particles (the constituents of beta rays) are the products of decay of a radioactive element. Beta particles are high-energy electrons or positrons emitted from the nucleus of the decaying element.

42. Defeats soundly TROMPS
“Tromp” is a variant of “tramp”, so to tromp all over someone is to give them a shellacking.

44. Actress Ullmann or Tyler LIV
Liv Ullmann is a Norwegian, best known to us in North America as an actress (I saw her recently in the classic war movie “A Bridge Too Far”). Ullmann has also directed several films, including “Sofie” released in 1992. Ullmann lived with famed Swedish director Ingmar Bergman for several years in the 1960s.

46. Informer, to a cop STOOLIE
Stoolies, also called canaries, will sing to the cops given the right incentive. “Stoolie” is short for “stool pigeon”. A stool pigeon was a decoy bird tied to a stool so as to lure other pigeons. Originally a stoolie was a decoy for the police, rather than an informer, hence the name.

53. Sends junk e-mail to SPAMS
Apparently the term “spam”, used for unwanted email, is taken from a “Monty Python” sketch. In the sketch (which I’ve seen) the dialog is taken over by the word Spam, a play on the glut of canned meat in the markets of Britain after WWII. So “spam” is used for the glut of emails that takes over online communication. I can just imagine nerdy Internet types (like me) adopting something from a “Monty Python” sketch to describe an online phenomenon …

57. Digilux 3 camera maker LEICA
Leica is a German optics company, famous for production of lenses and cameras. The 1913 Leica was the first practical camera that could use 35mm film, a size chosen because it was already the standard for film used in motion pictures.

61. Red “Sesame Street” puppet ELMO
The man behind/under the character Elmo on “Sesame Street” is Kevin Clash. If you want to learn more about Elmo and Clash, you can watch the 2011 documentary “Being Elmo: A Puppeteer’s Journey”.

64. Bank claim LIEN
A lien is the right that one has to retain or secure someone’s property until a debt is paid. When an individual takes out a car loan, for example, the lending bank is usually a lien holder. The bank releases the lien on the car when the loan is paid in full.

65. Bluesy Memphis street BEALE
Beale Street in downtown Memphis, Tennessee is a major tourist attraction. In 1977, by act of Congress, the street was officially declared the “Home of the Blues” due to its long association with the musical genre. Apparently “Beale” is the name of some forgotten military hero.

66. Danish shoe brand ECCO
I have to say, after owning several pairs, ECCO shoes are the most comfortable in the world …

Down
1. Sandwiches with Jif, briefly PBJS
Jif is the leading brand of peanut butter in the US, and has been since 1981. Introduced in 1958, it is now produced by Smuckers.

3. Heavenly bear URSA
The constellation called Ursa Major (Latin for “Larger Bear”) is often just called the Big Dipper because of its resemblance to a ladle or dipper. Ursa Major also resembles a plow, and that’s what we usually call the same constellation back in Ireland, the “plough”.

6. Countess’ spouse EARL
In the ranking of nobles, an earl comes above a viscount and below a marquess. The rank of earl is used in the British peerage system and is equivalent to the rank of count in other countries. Other British ranks have female forms (e.g. marquess and marchioness, viscount and viscountess), but there isn’t a female word for the rank of earl. A female given the same rank as an earl is known as a countess.

7. Lover of Juliet ROMEO
William Shakespeare’s “Romeo and Juliet” is all about the love between the two title characters, which is forbidden as the pair come from two families who are sworn enemies. Early in the play, Romeo (a Montague) sneaks into a masquerade ball being held by the Capulets in the hope of meeting a Capulet girl named Rosaline. Instead, he meets and falls for Juliet, also a Capulet. Tragedy ensues …

8. Crispy Crunchies! fries maker ORE-IDA
Ore-Ida frozen foods are all made using potatoes. The company is located in Oregon, just across the border from Idaho. “Ore-Ida” is a melding of the two state names.

10. Ristorante red CHIANTI
Chianti is a red wine from the Chianti region of central Tuscany in Italy. Historically, Chianti was stored in a characteristically bulbous bottle wrapped in a straw basket. However, the pragmatists have won the day and regular wine bottles tend to be used nowadays.

11. *Root source for a database MASTER FILE (giving “X-File”)
“The X-Files” is a very successful science fiction show that aired on the Fox network from 1993 to 2002. The stars of the show are David Duchovny (playing Fox Mulder) and the very talented Gillian Anderson (playing Dana Scully). By the time the series ended, it was the longest-running sci-fi show in US broadcast history.

12. Southwestern pot OLLA
An olla is a traditional clay pot used for the making of stews. “Olla” was the Latin word used in Ancient Rome to describe a similar type of pot.

13. Holiday season NOEL
“Noël” is the French word for the Christmas season, ultimately coming from the Latin word for “birth” (natalis). Noel has come to be used as an alternative name for a Christmas carol.

22. Winks count FORTY
Back in the early 1800s, folks took “nine winks” when getting a few minutes of sleep during the day. Dr. William Kitchiner extended this concept in his 1821 self-help book “The Art of Invigorating and Prolonging Life”. He suggested “A Forty Winks Nap”, which we seem to have been taking ever since. Mind you, I’m up to about eighty winks most days …

49. “Copacabana” temptress LOLA
The Copacabana of song is the Copacabana nightclub in New York City (which is also the subject of the Frank Sinatra song “Meet Me at the Copa”). The Copa opened in 1940 and is still going today although it is struggling. The club had to move due to impending construction and is now “sharing” a location with the Columbus 72 nightclub. “Her name was Lola, she was a showgirl …”

54. Ballerina’s bend PLIE
]The French word for “bent” is “plié”. In the ballet move known as a plié, the knees are bent.

59. Chanel of perfume COCO
Coco Chanel was a French fashion designer. Perhaps because I am a man, clothes design is not my forte. However, if I had to pick a designer whose clothes I really liked, it would be Chanel. She had a way of creating simpler designs that looked so elegant on a woman.

60. Yankee with more than 3,000 hits, familiarly A-ROD
Professional baseball player Alex Rodriguez earned more nicknames than just A-Rod. He has been called “the Cooler” by some players as there is a perception that teams go cold when he joins them and hot when he leaves. He has also been called “A-Fraud” by teammates because of another perception, that he is over-demanding. Rodriguez now seems to be in a world of hurt for using illegal performance-enhancing drugs.