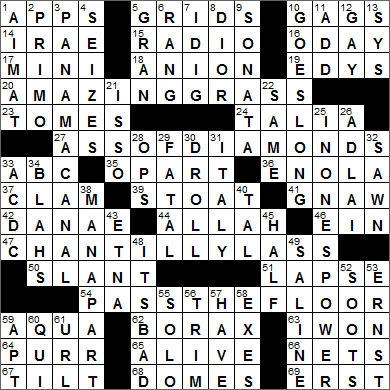 CROSSWORD SETTER: Jeffrey Wechsler
THEME: CE to SS … each of today’s themed answers is a common phrase in which the letter string CE has been changed to AS at the end of one word:

20A. What lawn care products promise? AMAZING GRASS (from “Amazing Grace”)
27A. Four-legged baseball mascot? ASS OF DIAMONDS (from “ace of diamonds”)
47A. Young woman working with delicate fabric? CHANTILLY LASS (from “Chantilly lace”)
54A. Forget to press an elevator button? PASS THE FLOOR (from “pace the floor”)

Today’s Wiki-est, Amazonian Googlies
Across
14. Wrath, in a hymn IRAE
“Dies Irae” is Latin for “Day of Wrath”. It is the name of a famous melody in Gregorian Chant, one that is often used as part of the Roman Catholic Requiem Mass.

17. 1959 British Motor Corp. debut MINI
The original mini was a fabulous car, one that I drove all over Ireland in my youth. It had a unique front-wheel-drive layout that took up very little space, allowing for a lot of room (relatively speaking) for passengers and baggage. One space-saving trick was to mount the engine transversely, so it sits rotated 90-degrees from the norm. That engine had a capacity of only 848cc. In 1961, a Mini Cooper model was introduced, a sporty version of the Mini. The Mini Cooper was a phenomenal hit, especially after repeated wins in the Monte Carlo Rally. The Mini marque has been owned by BMW since 1994.

19. Ice cream brand EDY’S
Dreyer’s ice cream sells its products under the name Dreyers in the Western United States, and Edy’s in the Eastern states. The company’s founders were William Dryer and Joseph Edy.

20. What lawn care products promise? AMAZING GRASS (from “Amazing Grace”)
“Amazing Grace” is a very, very famous hymn, with words written by John Newton in 1779. The words have been set to a number of different melodies, and what we are used to hearing today is music from a tune called “New Britain”.

23. Reference library array TOMES
“Tome” first came into English from the Latin “tomus” which means “section of a book”. The original usage in English was for a single volume in a multi-volume work. By the late 16th century “tome” had come to mean “a large book”.

24. Sylvester’s “Rocky” co-star TALIA
The actress Talia Shire is best-known for playing Rocky’s wife Adrian in the “Rocky” series of movies. She also played the daughter of Don Corleone in “The Godfather” films. Shire is the sister of movie director Francis Ford Coppola and the aunt of actor Nicolas Cage. Her son is the actor Jason Schwartzman.

33. “Dancing With the Stars” airer ABC
When I was growing up in the British Isles, there was a surprisingly popular BBC television show featuring professional ballroom dancing called “Come Dancing”. It ran almost every year from 1949 to 1998, and in 2004 the BBC resurrected it with a new twist, adding celebrities to dance with the professionals. The new show, called “Strictly Come Dancing”, is a huge success and has become a worldwide franchise. Over here we watch the American version called “Dancing with the Stars”. It really is fun television …

35. Genre of Vasarely’s “Zebras” OP ART
Victor Vasarely was a Hungarian-French artist who produced works in the Op Art genre. Vasarely’s painting from the 1930s called “Zebras” is often cited as one of the first examples of op art.

36. With 12-Down, Smithsonian aviation exhibit ENOLA
(12D. See 36-Across GAY)
The Enola Gay was the B-29 that dropped the first atomic bomb, on Hiroshima in August 1945. Enola Gay was the name of the mother of pilot Col. Paul W. Tibbets, Jr. The restored plane has been on display since 2003 at the Smithsonian’s Steven F. Udvar-Hazy Center at Washington Dulles International Airport.

37. Paella morsel CLAM
Paella is sometime referred to as the Spanish national dish, but not by Spaniards. In Spain, paella is regarded as a typical regional dish from Valencia.

39. Short-tailed weasel STOAT
The stoat, also known as the short-tailed weasel, has dark brown fur in the summer and white fur in the winter. Sometimes the term “ermine” is used for the animal during the winter when the fur is white. Ermine skins have long been prized by royalty and are often used for white trim on ceremonial robes.

42. Daughter of Eurydice DANAE
In Greek mythology, Danaë was the mother of Perseus, with the father being Zeus. Danaë herself was the daughter of King Acrisius of Argos and his wife Queen Eurydice.

47. Young woman working with delicate fabric? CHANTILLY LASS (from “Chantilly lace”)
Chantilly is a town located just 24 miles from the center of Paris. The town gave its name to Chantilly cream and Chantilly lace.

59. Teal relative AQUA
The color known as “aqua” is a light greenish blue.

62. Natural detergent BORAX
Borax is also known as sodium borate, and is a salt of boric acid. Borax is a white powder that dissolves easily in water. The compound has many uses, for example as an antifungal agent, water-softening agent and as an antiseptic. Actor and future US president Ronald Reagan used to tout 20 Mule Team Borax that was used as a laundry product.

68. Staples of Byzantine architecture DOMES
Byzantium was a Greek colony that was centered on what was to become Constantinople, and is now Istanbul. Legend suggests that there was a king Byzas, who gave his name to the city and later the Byzantine Empire. The Eastern Roman Empire later became known as the Byzantine Empire, right up until the Middle Ages.

Down
3. Its lowest toll ever was 36 cents, charged in 1928 to a swimmer PANAMA CANAL
The Panama Canal was predated by the Panama Railway. The railway’s route actually determined the eventual route of the canal. The impetus to build a canal was spurred on by the success of the Suez Canal which opened in 1869. Work on the Panama Canal started in 1881, but things did not go smoothly at all. Companies involved in the project went bankrupt, one after the other. Eventually the US government bought its way into the project with President Roosevelt handing over millions of dollars to the country of Panama. The canal was finally completed in 1914. All in all, about 27,500 workers died during construction. A kind blog reader highly recommends the book “The Path Between the Seas” by David McCullough, should anyone want to read more about the fascinating tale of Panama Canal’s construction.

American adventurer Richard Halliburton is best known for having paid the lowest toll in the history of the Panama Canal, having forked over a mere 36 cents to swim the length of the waterway in 1928. Halliburton’s last adventure was an attempt to sail from Hong Kong to San Francisco in a Chinese junk, in 1939. Sadly, Halliburton and his crew never completed that journey and were presumed lost at sea.

7. Beatnik’s “Understood!” I DIG!
The term “beatnik” was coined by journalist Herb Caen in 1958 when he used it to describe the stereotypical young person of the “beat generation” that was oft associated with the writer Jack Kerouac. That stereotypical beatnik would be playing the bongos and rolling his or her own cigarettes. Male beatniks also tended to sport goatees and wear berets.

8. Schiaparelli competitor DIOR
Christian Dior was a French fashion designer. As WWII approached, Dior was called up by the French military, drawing a temporary halt to his career in fashion. He left the army in 1942 and for the duration of the war designed clothes for wives of Nazi officers and French collaborators. After the war his designs became so popular that he helped reestablish Paris as the fashion center of the world.

Elsa Schiaparelli was an Italian fashion designer, a great rival of the perhaps more famous Coco Chanel. Schiaparelli was most successful between the two World Wars, but her business closed in 1954 as she failed to adapt to changing tastes after WWII.

9. Beethoven’s “Waldstein,” e.g. SONATA
Beethoven’s Piano Sonata No. 21 is better known as “Waldstein”. The work is so called as the composer dedicated it to his friend and patron Count Ferdinand Ernst Gabriel von Waldstein.

10. Tries for a bomb, in football GOES LONG
A “Hail Mary pass” (also called “the long bomb”) is a desperation move in American football in which a long pass is thrown with very little chance of a success, right at the the end of a game or at the end of a half. The term dates back to thirties, and was probably first used at Notre Dame. The “Hail Mary” is a prayer in the Christian tradition that is of particular significance Roman Catholicism.

13. Part of CBS: Abbr. SYS
CBS used to be called the Columbia Broadcasting System. CBS is the second-largest broadcaster in the world, second only to the BBC in the UK. CBS introduced its “eye” logo in 1951.

26. Two-time loser to Dwight ADLAI
Adlai Stevenson (AES) ran for president unsuccessfully against Dwight D. Eisenhower in 1952 and in 1956. Some years after his second defeat, Stevenson served under President Kennedy as Ambassador to the United Nations. Stevenson was always noted for his eloquence and he had a famous exchange in a UN Security Council meeting during the Cuban missile crisis. Stevenson bluntly demanded that the Soviet representative on the council tell the world if the USSR was installing nuclear weapons in Cuba. His words were “Don’t wait for the translation, answer ‘yes’ or ‘no’!” followed by “I am prepared to wait for my answer until Hell freezes over!”

31. Volta’s birthplace ITALY
Alessandro Volta was the physicist who invented the first battery, way back in 1800. One of Volta’s first applications of his new invention was to use a battery (and a very long run of wire between the Italian cities of Como and Milan) to shoot off a pistol from 30 miles away!

33. Rock group from Sydney AC/DC
The Heavy Metal band known as AC/DC was formed by two brothers Malcolm and Angus Young in Australia. The group is usually called “Acca Dacca” down under.

Vin Diesel is the stage name of actor Mark Sinclair Vincent. Diesel was born in New York City with his twin brother Paul. The twins never knew their father, and their mother is an astrologer. Vincent was given the nickname of “Diesel” by his friends early in his life, as he was said to have a bottomless supply of energy.

43. Very active volcano ETNA
Mt. Etna is the largest of three active volcanoes in Italy. Mt Etna is about 2 1/2 times the height of its equally famous sister, Mt. Vesuvius. Etna is home to a 110-km long narrow-guage railway, and two ski resorts. The third of Italy’s famous volcanoes is Stromboli.

53. Dadaism pioneer ERNST
Max Ernst was a painter and sculptor, a pioneer in the Dada movement and Surrealism. Ernst was born near Cologne in Germany in 1891 and he was called up to fight in WWI, as were most young German men at that time. In his autobiography he writes “Max Ernst died the 1st of August, 1914” a statement about his experiences in the war. In reality, Ernst died in 1976 having lived to the ripe old age of 85.

60. On the __ vive QUI
“On the qui vive” is a phrase that means “on the alert”. The term “qui vive?” is French for “(long) live who?” and was used as a challenge by a sentry to determine what loyalty a person had.