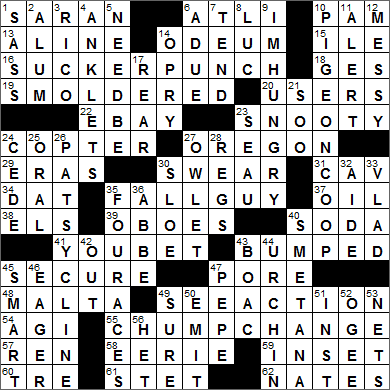 35A. Easy mark … and a hint to the starts of the answers to starred clues FALL GUY

Today’s Wiki-est, Amazonian Googlies
Across
1. See-through kitchen supply SARAN
What’s known as plastic wrap in America, we call cling-film in Ireland. Plastic wrap was one of those unintended inventions, a byproduct of a development program to create a hard plastic cover for cars.

6. Mythical king of the Huns ATLI
Atli is a character in the Volsunga Saga of 13th century Icelandic lore. It is believed that the Atli character is loosely based on Attila the Hun.

10. Kitchen spray PAM
PAM cooking oil was introduced in 1961 by Leon Rubin and Arthur Meyerhoff. The name “PAM” is an acronym … standing for “Product of Arthur Meyerhoff”. Who’d a thunk it …?

14. Ancient Greek theater ODEUM
In Ancient Greece an odeon (also “odeum”) was like a small theater, with “odeon” literally meaning a “building for musical competition”. Odea were used in both Greece and Rome for entertainments such as musical shows and poetry readings.

18. Some kitchen appliances GES
The General Electric Company is usually referred to simply as “GE”. One of the precursor companies to GE was Edison General Electric, founded in 1890 by the inventor Thomas Edison. What we know today as GE was formed two years later when Edison merged his company with Charles Coffin’s Thomson-Houston Electric Company. In 1896, GE was selected as one of the 12 companies listed on the newly formed Dow Jones Industrial Average. GE is the only one of the original 12 that is still on that list. I spent over ten years with GE at the beginning of my working career, and in fact it was GE that asked me to transfer to the US back in the 1980s …

20. Passengers in flight, often USERS
I think that the reference is more likely a user of the Internet, rather than anything unsavory …

22. Cyberspace marketplace EBAY
eBay is an auction site with a twist. If you don’t want to enter into an auction to purchase an item, there’s a “Buy It Now” price. Agree to pay it, and the item is yours!

23. Snobbish SNOOTY
“Snoot” is a variant of “snout” and is a word that originated in Scotland. The idea is that someone who is “snooty”, or snouty, tends to look down his or her nose at the rest of the world.

27. Mount Hood’s state OREGON
Mount Hood is a volcanic peak in northern Oregon. Mount Hood is the highest peak in the state, and is located about 50 miles southeast of Portland. There are six ski areas on the mountain, including a resort called Timberline that has North America’s only lift operating year-round for skiing.

30. Keep the censor busy SWEAR
The original “censor” was an officer in ancient Rome who had responsibility for taking the “census”, as well as supervising public morality.

39. Bassoon cousins OBOES
The oboe is perhaps my favorite of the reed instruments. The name “oboe” comes from the French “hautbois” which means “high wood”. When you hear an orchestra tuning before a performance you’ll note (pun intended!) that the oboe starts off the process by playing an “A”. The rest of the musicians in turn tune to that oboe’s “A”.

48. Island nation near Sicily MALTA
The island state of Malta is relatively small, but its large number of inhabitants makes it one of the most densely populated countries in Europe. Malta’s strategic location has made it a prized possession for the conquering empires of the world. Most recently it was part of the British Empire and was an important fleet headquarters. Malta played a crucial role for the Allies during WWII as it was located very close to the Axis shipping lanes in the Mediterranean. The Siege of Malta lasted from 1940 to 1942, a prolonged attack by the Italians and Germans on the RAF and Royal Navy, and the people of Malta. When the siege was lifted, King George VI awarded the George Cross to the people of Malta collectively in recognition of their heroism and devotion to the Allied cause. The George Cross can still be seen on the Maltese flag, even though Britain granted Malta independence in 1964.

55. *Peanuts CHUMP CHANGE
We use “chump change” to describe a trivial amount of money. The phrase was coined in the 1950s, and is probably a reference to an amount of money that only a chump or fool would think was adequate.

57. Nickelodeon pooch REN
“The Ren and Stimpy Show” is an animated television show that ran on Nickelodeon from 1991 to 1996. The title characters are Marland “Ren” Höek, a scrawny Chihuahua, and Stimpson J. Cat, a rotund Manx cat. Not my cup of tea …

61. Editor’s “Let it stand” STET
“Stet” is a Latin word meaning “let it stand”. In editorial work, the typesetter is instructed to disregard any change previously marked by writing the word “stet” and then underscoring that change with a line of dots or dashes.

62. Hoopster Archibald and rapper Dogg NATES
Nate Archibald is a retired basketball player who played mainly for the Kansas City Kings and the Boston Celtics. Archibald could get the ball in the basket, but was also willing pass to a teammate when advantageous. He is only player to lead the league in assists and scoring in the same season.

Nate Dogg was the stage name of rapper Nathaniel Hale from Clarksdale, Mississippi. Nate Dogg is no longer with us as he died at the age of 41 after suffering multiple strokes.

Down
2. Homecoming guest ALUM
An “alumnus” (plural … alumni) is a graduate or former student of a school or college. The female form is “alumna” (plural … alumnae). The term comes into English from Latin, in which alumnus means foster-son or pupil. “Alum” is an informal term used for either an alumna or an alumnus.

3. Affluent, in Andalusia RICO
Andalusia (“Andalucia” in Spanish) is one of the seventeen autonomous communities in the Kingdom of Spain, and is the most southerly. The capital of Andalusia is the old city of Seville. The name Andalusia comes from its Arabic name, Al-Andalus, reflecting the region’s history as the center of Muslim power in Iberia during medieval times.

6. Together, musically A DUE
“A due” is a musical term meaning “together”, and translates literally from Italian as “by two”.

10. *Place for brooding PIGEON COOP
An Old English word for basket (“cypa”) evolved in the 14th century to the word “coop”, meaning a small cage for poultry, a word we still use today.

14. Nashville attraction OPRY
“The Grand Ole Opry” started out as a radio show in 1925 originally called the WSM “Barn Dance”. In 1927, the “Barn Dance” radio show was broadcast in a slot after an NBC production called “Musical Appreciation Hour”, a collection of classical works including Grand Opera. In a December show, the host of “Barn Dance” announced, “For the past hour, we have been listening to music taken largely from Grand Opera. From now on we will present the ‘Grand Ole Opry'”. That name was used for the radio show from then on.

21. Great Lakes’ __ Canals SOO
In the summer of 2010 I spent a very interesting afternoon watching ships make their way through the Soo Locks and Soo Canals between Lake Superior and the lower Great lakes. The name “Soo” comes from the US and Canadian cities on either side of the locks, both called Sault Ste. Marie.

23. 10-time All-Pro linebacker Junior SEAU
Junior Seau was an NFL linebacker, first playing for the San Diego Chargers and then the Miami Dolphins and the New England Patriots. Sadly, Seau was found dead in his home in 2011, having committed suicide by shooting himself in the chest.

30. __ gin fizz SLOE
By definition, a cocktail known as a Fizz includes lemon or lime juice and carbonated water. The most popular of the genre is the Gin Fizz, made from 3 parts gin, 2 parts lemon juice, 1 part sugar syrup and 5 parts soda water. There is also a variant known as a sloe gin fizz.

33. Prince who inspired Dracula VLAD
Vlad III was a 15th century ruler in modern-day Romania. He was given the name “Vlad the Impaler” after he died, and this suggests that he was in the habit of impaling his enemies. His father, Vlad II, was known as Vlad Dracul, which translates as Vlad the Devil or Dragon. As a result, Vlad the Impaler was also known by the diminutive form of his father’s name, i.e. Dracula! Bram Stoker borrowed this name for his famous 1897 novel titled “Dracula”.

36. Calais cleric ABBE
“Abbé” is the French word for “abbot”.

40. “The Bartered Bride” composer SMETANA
Bedřich Smetana was a Czech composer, known as the father of Czech music. Just like Beethoven, Smetana was still composing at the end of his life even though he was totally deaf.

Smetana’s comic opera “The Bartered Bride” was first performed in 1866, in Prague. The bartered bride is Marenka, a young woman from a Bohemian village who has been promised in marriage to a wealthy young man that she has never met. Much confusion ensues, with lots of bartering, but a happy ending.

43. Former U.K. carrier BOAC
British Overseas Airways Corporation (BOAC) was one of the two airlines that were merged in 1974 to form British Airways (the other was British European Airways, known as BEA).

44. Mischievous boy URCHIN
Our word “urchin” comes from the older word “yrichon” that meant “hedgehog” in the 14th century. This readily explains why we use the term “sea urchin” for the prickly sea creature. The evolution to the meaning “mischievous boy” is less clear. The term was applied first to those whose behavior or appearance suggested a hedgehog, such as hunchbacks and goblins. The definition drifted into “bad girl”, and “poorly clothed youngster”, and now seems to apply to young males.

47. Love-crazy Le Pew PEPE
Pepé Le Pew is a very likeable cartoon character from the Looney Tunes and Merrie Melodies series. Pepé is a French skunk, first introduced way back in 1945. He is always thinking of “l’amour” and chases the lady skunks, or a black cat with a white stripe painted down her back accidently.

52. Architectural S-curve OGEE
An ogee is a type of S-curve. Specifically it is a figure consisting of two arcs that curve in opposite directions (like an S) but both ends of the curve end up parallel to each other (which is not necessarily true for an S). An ogee arch is composed of two ogees, with one being the mirror of the other and meeting at the arch’s apex.