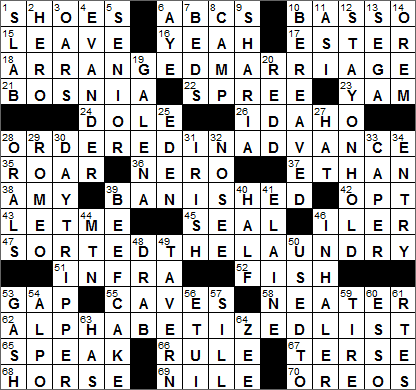 CROSSWORD SETTER: Victor Barocas
THEME: Alphabetized Lists … each of our themed clues today is an ALPHABETIZED LIST of letters indicated in the corresponding answer. Said another way, we rearrange the letters of the word or words pointed to in the answer into an ALPHABETIZED LIST, which becomes the clue. To top things off, each of the themed answers is a common phrase:

62A. ILST … and each of three other puzzle clues ALPHABETIZED “LIST”

Today’s Wiki-est, Amazonian Googlies
Across
10. Lowest part BASSO
The bass is the lowest male singing voice. A man with such a voice might be called a “basso” (plural “bassi”).

17. Butyl acetate, e.g. ESTER
Esters are very common chemicals. The smaller, low-molecular weight esters are usually pleasant smelling and are often found in perfumes. At the other end of the scale, the higher-molecular weight nitroglycerin is a nitrate ester and is very explosive, and polyester is a huge molecule and is a type of plastic. Fats and oils found in nature are fatty acid esters of glycerol.

Butyl acetate is a chemical found in some fruits. It is a chemical that contributes to the characteristic taste and smell of apples and bananas.

21. Balkan region BOSNIA
Bosnia and Herzegovina was one of six federal units in former Yugoslavia that gained independence after the Yugoslav wars of the 1990s. There are three main ethnic groups in Bosnia. The largest group are the Bosniaks, the second the Bosnian Serbs, and the third the Bosnian Croats.

24. __ Plantation, site of the world’s largest maze DOLE
The Dole Plantation on Oahu is home to the Pineapple Garden Maze. The maze sits on three acres of land, and includes over two miles of paths. It is the largest maze in the world.

26. Sun Valley locale IDAHO
The resort city of Sun Valley, Idaho was developed by W. Averell Harriman in the 1930s as he was convinced that there was a call for a winter resort destination after the success of the 1932 Winter Olympics in Lake Placid, New York. A 220-room hotel called the Sun Valley Lodge was opened in 1936, quickly followed by the Swiss-style Sun Valley Inn in 1937. Sun Valley became home to the world’s first chairlifts, installed in 1936 as a replacement for rope tows.

36. One of Suetonius’ “Twelve Caesars” NERO
Suetonius was a Roman historian who wrote a set of biographies of twelve successive rulers of Ancient Rome, starting with Julius Caesar and ending with Domitian. The complete list is:

37. Actor Hawke ETHAN
Ethan Hawke is a Hollywood actor who made his breakthrough in a supporting role in “Dead Poet’s Society”, playing opposite Robin Williams. Hawke was married to Uma Thurman, with whom he has two children.

38. Youngest March sister AMY
“Little Women” is a novel written by American author Louisa May Alcott. The quartet of little women is Meg, Jo, Beth and Amy March. Jo is a tomboy and the main character in the story, and is based on Alcott herself.

46. Robert of “The Sopranos” ILER
The actor Robert Iler’s most famous role was A.J., son of mob leader Tony Soprano in HBO’s “The Sopranos”. Apparently Iler’s screen persona has spilled over into his personal life, as he was arrested for armed robbery of two tourists in 2001 (and pleaded guilty to a lesser charge).

52. Angler’s prize FISH
We use the verb “to angle” to mean “to fish” because “angel” was an Old English word for a hook.

58. More pinlike? NEATER
Apparently the idiom “neat as a pin” arose in the early 1800s, with the advent of mass production. Up until that time, pins were handmade and so were irregular and relatively flawed. Mass-produced pins were uniform and of consistent quality. So, something that was uniform and of consistent quality came to be described as “neat as a pin”.

68. Game that may involve complicated shots H-O-R-S-E
H-O-R-S-E is a basketball game for two or more players. The first person to play shoots from anywhere on the court, and if he or she makes it, the second player has to make the same shot from the same place. If the second player misses, he/she receives the letter “H”. The first player to spell out the word “horse” is the loser.

69. Mediterranean feeder NILE
Depending on definition, the Nile is generally regarded as the longest river on the planet. The Nile forms from two major tributaries, the White Nile and the Blue Nile, which join together near Khartoum, the capital of Sudan. From Khartoum the Nile flows north, traveling almost entirely through desert making it central to life for the peoples living along its length.

70. Three-layer treats OREOS
There’s an iPhone app featuring the Oreo cookie. It’s a game in which one twists Oreo cookies apart, “licks” the cream from the center and then dunks the remainder of the cookie in a glass of milk.

Down
4. Heavyweight champ between Buster and Riddick EVANDER
Evander Holyfield is a professional boxer from Atmore, Alabama. Holyfield was Undisputed World Champion twice over, once as a cruiserweight and then as a heavyweight. Since retiring, Holyfield has stayed in the limelight. He competed in “Dancing with the Stars” in 2005, and “Celebrity Big Brother (UK)” in 2014.

Riddick Bowe is a former professional boxer from Brooklyn, New York. Bowe was Undisputed Heavyweight Champion of the World in 1992. A few years later Bowe retired from boxing to join the US Marines. However, after just 11 days of basic training Bowe asked to quit, and the Marine Corps came into a lot of criticism for acceding to his request.

9. Islamic law SHARIA
Sharia Law is the Islamic legal system that governs many things like crime, politics and economics as well as many aspects of personal behavior. Sharia Law is based on the Quaran as well as the Hadith, a set of opinions and life examples from the prophet Muhammad.

13. Genesis creator SEGA
The Genesis is a video game console sold in the US by the Japanese company Sega. In the rest of the world, the console is sold as the Mega Drive, as Sega couldn’t get the rights to the Mega Drive name in the US.

19. Lead ore GALENA
Galena is the most commonly used mineral to produce lead. It is a form of lead sulfide. Galena is the state mineral of Missouri and of Wisconsin.

20. Comedian Foxx REDD
Redd Foxx was the stage name of John Elroy Sanford, best known for starring in “Sanford and Son”. “Sanford and Son” was an American version of a celebrated hit BBC sitcom that I grew up with in Ireland, called “Steptoe and Son”.

25. First place? EDEN
According to the Book of Genesis, Adam and Eve lived in a garden “in” Eden, with Eden being geographically located by reference to four rivers including the Tigris and the Euphrates. Some scholars hypothesize that Eden was located in Mesopotamia, which encompasses much of modern-day Iraq.

27. Porkpie, for one HAT
The porkpie hat originated in the mid-1800s. It is round, usually made of felt, and has a flat top. When first introduced, the porkpie was a woman’s hat, but then men grabbed hold of it …

29. “What light through yonder window breaks?” speaker ROMEO
There’s a famous couplet in William Shakespeare’s “Romeo and Juliet” spoken by Romeo as he spots Juliet above him at a window or on a balcony:

Arise, fair sun, and kill the envious moon,
Who is already sick and pale with grief,
That thou, her maid, art far more fair than she.
I reckon Romeo is smitten …

31. Like Jameson whiskey IRISH
Jameson is a brand of Irish whiskey from Dublin, and is the best selling Irish whiskey in the world. It’s not my favorite though, with that “honor” going to Bushmills.

39. “Magic Mike” feature BEEFCAKE
It’s not really clear how the “cheesecake” came to be used for a provocative picture of a woman. It is known that the term arose in the 1930s, and originally applied to to the covers of “pulp” magazines that used the images of the attractive young females to attract a largely male audience. One theory is that during the depression years, the luscious cheesecake dessert was unattainable, as were the “luscious” models depicted on the magazine covers. The male equivalent of cheesecake is “beefcake”.

“Magic Mike” is a 2012 movie starring Tatum Channing as a young male stripper. The film’s storyline is loosely based on Channing’s real-life experiences, as he worked as a stripper in Tampa, Florida when he was 18 years old.

I met a traveller from an antique land
Who said: “Two vast and trunkless legs of stone
Stand in the desert. Near them, on the sand,
Half sunk, a shattered visage lies, whose frown,
And wrinkled lip, and sneer of cold command,
Tell that its sculptor well those passions read
Which yet survive, stamped on these lifeless things,
The hand that mocked them and the heart that fed:
And on the pedestal these words appear:
‘My name is Ozymandias, king of kings:
Look on my works, ye Mighty, and despair!’
Nothing beside remains. Round the decay
Of that colossal wreck, boundless and bare
The lone and level sands stretch far away.

41. Paige of British musical theatre ELAINE
The English singer and actress Elaine Paige got her big break in musical theater when she was cast at the original Eva Perón in the first production of “Evita”. She was also the first to play Grizabella in “Cats”, giving her a top ten hit with the song “Memory”. She paired up with Barbara Dickson in the musical “Chess” and together released the single “I Know Him So Well”, which is the biggest-selling record in history by a female duo.

54. Dinner for Spot ALPO
Alpo is a brand of dog food first produced by Allen Products in 1936, with “Alpo” being an abbreviation for “Allen Products”. Lorne Greene used to push Alpo in television spots, as did Ed McMahon and Garfield the Cat, would you believe?

56. Little case ETUI
An etui is an ornamental case used to hold small items, in particular sewing needles. We imported both the case design and the word “etui” from France. The French also have a modern usage of “etui”, using the term to depict a case for carrying CDs.

57. Window frame part SILL
A “sill plate” or simply “sill” is an architectural term for a bottom horizontal member to which vertical members are attached. A “window sill” is specific sill plate that is found at the bottom of a window opening.

60. Canadian gas brand ESSO
The brand name Esso has its roots in the old Standard Oil company as it uses the initial letters of “Standard” and “Oil” (ESS-O). The Esso brand was replaced by Exxon in the US, but ESSO is still used in many other countries.

64. Zipper opening? ZEE
The letter Z (zee) is the opening letter of the word “zipper”.