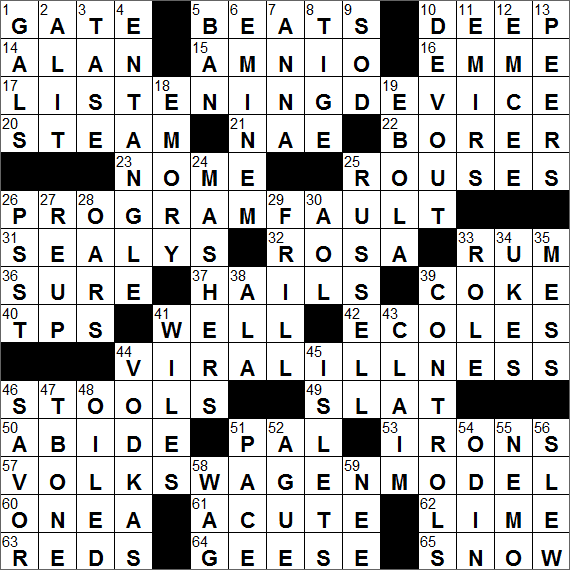 Each of today’s themed answers has the same clue, namely “Bug”.

The actor Alan Arkin won his only Oscar (Best Supporting Actor) for his role in “Little Miss Sunshine” from 2006, a movie that I just did not understand …

Emme is the highest paid plus-size model in the world. Emme’s real name is Melissa Aronson, and she was born in New York City and raised in Saudi Arabia.

“Fashion Emergency” is a reality TV show that originally aired on E!

Back in 1947, the famed computer programmer Grace Hopper noticed some colleagues fixing a piece of equipment by removing a dead moth from a relay. She remarked that they were “debugging” the system, and so she has been given credit for popularizing the term.

The cocktail known as a Cuba libre is basically a rum and Coke although the traditional recipe calls for some lime juice as well.

The US government maintains information on all males who are potentially subject to military conscription, using what is called the Selective Service System (SSS). In the event that a draft was held, men registered would be classified into groups to determine eligibility for service. Class 1-A registrants are those available for unrestricted military service. Other classes are 1-A-O (conscientious objector available for noncombatant service), 4-A (registrant who has completed military service), 4-D (Minister of religion) and 4-F (registrant not acceptable for military service).

Rap star Eminem’s real name is Marshall Mathers, a native of Saint Joseph, Missouri. Mathers grew up poor, raised by a single-mom as the family was abandoned by his father when he was 18 months old. Marshall and his mother moved around the country before settling in a suburb of Detroit. He didn’t do well at school, and dropped out at the age of 17. But in the end he made it pretty big …

The movie “8 Mile” stars Eminem as a young rap artist in Detroit, and feature the song “Lose Yourself” that was performed and written by Eminem. The song won Eminem the 2002 Oscar for Best Original Song, making him the first rap artist to be so honored.

“Buster Brown” is a comic strip created in 1902 by Felton Outcault. Outcault took his name Buster from the very popular film star at the time, Buster Keaton. Buster’s dog Tige, was an American Pit Bull Terrier. Apparently when Tige started to “talk” in the strip, he became the first talking pet in American comics.

Dubai is one of the seven Emirates that make up the federation known as the United Arab Emirates (UAE). The two largest members of the UAE (geographically) are Dubai and Abu Dhabi, the only two of the seven members that have veto power over UAE policy.

Emory is a private school in Atlanta, Georgia with a focus on graduate research. The school was named after a Methodist Episcopal bishop called John Emory, who was very popular at the time of the school’s founding in 1836.

Bill Russell is a retired basketball player who played for the Boston Celtics from 1956 to 1969. Russell also captained the gold medal-winning US national team at the 1956 Summer Olympics in Melbourne, Australia.

Our word “dinghy” comes from the Hindi “dingi”, the word for a small boat.

Moviefone is a movie listing service that is available by telephone in many parts of the country. Moviefone was launched in 1989, and purchased by AOL ten years later for $388 million.

Shakespeare’s “Othello” was first performed in 1604. The main characters in the play are:

Hula is the name of the Polynesian dance. The chant or song that the dance illustrates, that’s known as the mele.

On a restaurant menu, items that are “à la carte” are priced and ordered separately. A menu marked “table d’hôte” (also called “prix fixe”) is a fixed-price menu with limited choice.

44…Beverages sometimes made from potatoes..VODKAS

The distilled beverage we call “vodka” takes its name from the Slavic word “voda” meaning “water”, with “vodka” translating as “little water”.

Asgard is one of the Nine Worlds of Norse religions. It is where the Norse gods live and is also home to Valhalla, the enormous hall ruled over by the god Odin.

In the 1954 movie version of “20,000 Leagues Under the Sea”, Captain Nemo goes down with his ship. In the novel by Jules Verne the fate of Nemo and his crew isn’t quite so cut and dry, although the inference is perhaps that they did indeed head for Davy Jones’ Locker.

Ahh … here’s an Irish word! Our usage of “slew” to mean “large number” has nothing to do with the verb “to slew”. The noun “slew” come into English in the early 1800s from the Irish word “sluagh” meaning “host, crowd, multitude”.

4…Involve in a complicated way..ENTANGLE

44…Beverages sometimes made from potatoes..VODKAS