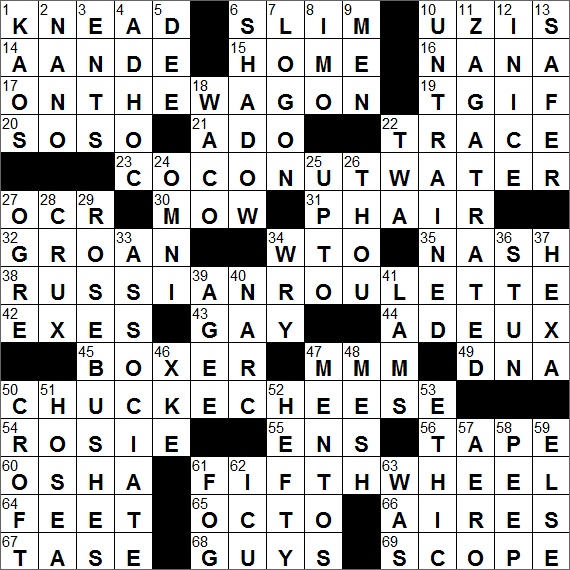 Today’s themed answers end with a type of WHEEL. We have four of them, so are lacking a FIFTH WHEEL:

Nana is always spoiling the grandkids.

The word “bib” comes from the Latin “bibere” meaning “to drink”, as does our word “imbibe”. So, maybe it’s less about spilling the food, and more about soaking up the booze …

Liz Phair is a rock singer from New Haven, Connecticut. Phair started out in the industry releasing homemade tapes under the name Girly Sound.

The World Trade Organization (WTO) is headquartered in Geneva, Switzerland. The stated aim of the WTO is to liberalize international trade. The organization was founded in 1995 when an international agreement on trade was reached that effectively replaced the existing General Agreement on Tariffs and Trade (GATT) that was laid down in 1949.

35…Poet who wrote about shrimp, “At times, translucence / Is rather a nuisance”..NASH

The poet Ogden Nash is well known for his light and humorous verse. Try this one for size:
A shrimp who sought his lady shrimp

Could catch no glimpse
Not even a glimp.
At times, translucence
Is rather a nuisance.

The disturbing game of Russian Roulette involves the placing of a single round in a revolver, spinning the cylinder and then a player firing the gun with the muzzle placed against his or her head. The game supposedly originated in Russia, and the name was first cited in a short story that dates back to 1937. The “game” was made famous by the 1978 movie “The Deerhunter” as it plays a central role in the film’s plot.

The boxer breed of dog (one of my favorites!) originated in Germany. My first dog was a boxer/Labrador mix, a beautiful animal. Our current family dog is a boxer/pug mix, another gorgeous creature.

DNA contains nucleotide base sequences called genes, that are blueprints for used in the manufacture of proteins needed by the body. Our DNA is also “decorated” with epigenetic markers that modify the activity level of genes, and can even turn genes off. These epigenetic markers respond to environmental conditions, so that organisms with the same DNA can exhibit differences in behavior and appearance, as a result of differing environments. This explains which identical twins develop differences in appearance over time.

Chuck E. Cheese is a sit-down pizza restaurant that features entertainment for children. The original Chuck E. Cheese’s Pizza Time Theatre was opened in San Jose, California in 1977 by founder Nolan Bushnell. Bushnell had already achieved success in the business world as the founder of Atari.

We don’t get to see Rosie O’Donnell on the screen very much these days. She had a very successful chat show that ran from 1996 to 2002. My favorite performance of hers on the big screen is in a supporting role to Meg Ryan in the 1993 movie “Sleepless in Seattle”.

Half of the letters in the word “noun” are letters N (ens).

Dangerous goods are commonly referred to as hazardous materials, or HazMat. People working with dangerous goods might wear a HazMat suit.

Buenos Aires is the capital of Argentina, located on the estuary of the Ria de la Plata. As a port city, the people of Buenos Aires are known as porteños (“people of the port”).

“Taser” is a brand name. The generic term for the device is conducted electrical weapon (CEW).

The satirical comedy series called “Get Smart” was the creation of Mel Brooks and Buck Henry, and starred Don Adams as Agent 86, Maxwell Smart. Agent 86 worked for the spy agency CONTROL, alongside the lovely Agent 99. CONTROL’s sworn enemy was the criminal organization called KAOS. Both CONTROL and KAOS were originally intended to be acronyms, but creators Brooks and Henry were so busy launching the show that they forgot to come up with something suitable.

4…Formed for a particular purpose..AD HOC

The actress Dee Wallace is best known for playing young Elliot’s mother in the Steven Spielberg 1982 masterpiece “E.T. the Extra-Terrestrial”.

The Zagat Survey is best known for rating restaurants across the major cities of the US, but it also rates things like hotels, nightlife, shopping, airlines and even zoos. The survey was started by Tim and Nina Zagat in 1979, and back then the survey was simply a collection of New York City restaurant ratings provided by friends of the couple.

Interstate 35 runs in a north-south direction from Laredo, Texas to Duluth, Minnesota. So, I-35 almost runs all the way from the Mexican border to the Canadian border, but not quite …

Trans World Airlines (TWA) was a big carrier in the US, but was perhaps even more recognized for its extensive presence in Europe and the Middle East. For many years, especially after the collapse of Pan-Am, TWA was considered the unofficial flag carrier for the US. The company started in 1930, the product of a forced merger of Transcontinental Air Transport and Western Air Express. The Transcontinental and Western Air that resulted (the original meaning of the acronym TWA) was what the Postmaster General wanted, a bigger airline to which the Postal Service could award airmail contracts.

“Crux” is the Latin word for “cross”, and came into English meaning “a central difficulty” in the early 1700s.

Jaguar started out as a manufacturer of sidecars for motorcycles back in 1922, when the company was known as the Swallow Sidecar Company (SS for short). The company changed its name to Jaguar after WWII, because of the unfortunate connotations of the letters “SS” at that time.

Mentos are mints made by the Italian confectioner Perfetti Van Melle. You might have seen video of Mentos mints being dropped into bottle containing a carbonated drink. The surface of the mint causes an explosive release of carbon dioxide resulting in a geyser of foam that can shoot many feet up into the air.

Lara Croft was introduced to the world as the main character in a pretty cool video game (I thought, back then) called “Tomb Raider”, back in 1996. Lara Croft moved to the big screen in 2001 and 2003, in two pretty awful movie adaptations of the game’s storyline. Angelina Jolie played Croft, and she did a very energetic job.

A young bird is said to have “fledged” when its wing muscles and feathers have developed enough for it to fly. The term “fledgling” is used for a bird that has fledged, but is still reliant on a parent for food and protection. The verb “to fledge” means “to acquire feathers”.

After being wheeled out of the Operating Room (OR) a patient might spend some time in the Intensive Care Unit (ICU).

“It Was a Very Good Year” is a lovely song about an older man recounting the romances of his life. The Kingston Trio were the first to record the song, in 1961. However, I think that Frank Sinatra’s 1965 recording is probably the most famous …

35…Poet who wrote about shrimp, “At times, translucence / Is rather a nuisance”..NASH

4…Formed for a particular purpose..AD HOC

12…How seafood is shipped..IN ICE