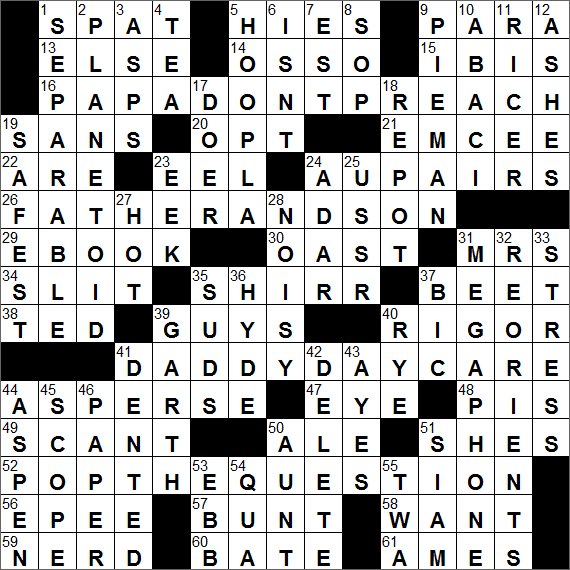 “Papa Don’t Preach” is a 1986 song recorded by Madonna. The song’s lyrics are based on teenage gossip heard outside the studio, chatter between schoolgirls from LA’s North Hollywood High School. Subjects mentioned in the words include teenage pregnancy and abortion.

An oast is a kiln used for drying hops as part of the brewing process. Such a structure might also be called an “oast house”.

“Mrs Dalloway” is a novel by Virginia Woolf, first published in 1925. The story tells of a day in the life of Clarissa Dalloway, a day in which she is preparing for a party that she is hosting. The novel has been compared to “Ulysses” by James Joyce, a story about a day in the life of Leopold Bloom.

Shirred eggs are eggs that have been baked without their shells in a flat-bottomed dish. The term “shirred” comes from the name of the dish that was traditionally used for the baking.

“Bill & Ted’s Excellent Adventure” is a 1989 comedy sci-fi film, starring Alex Winter as Bill and Keanu Reeves as Ted. It’s about two lazy students traveling through time in preparation for a history assignment, with a lot of “Dude!” and “Excellent!” scattered throughout the dialog. Reading the plot, this isn’t a movie that I’d normally go for, but somehow, I enjoyed it …

“Daddy Day Care” is a 2003 Eddie Murphy comedy film. It’s about an out-of-work father (Murphy) who opens up a daycare center for his young son and others. “Daddy Day Care” was that well received by the critics, and the 2007 sequel “Daddy Day Camp” (starring Cuba Gooding, Jr.) won that year’s Razzie for the Worst Prequel or Sequel.

To asperse is to spread false charges or make insinuations. The more common expression is “to cast aspersions”. “To asperse” comes from the Latin “aspergere” meaning “to sprinkle”. So, “to asperse” is also the term used when sprinkling holy water.

The word “sleuth” came into English from Old Norse as far back as 1200 when it meant the “track or trail of a person”. In the mid-1800s, a sleuthhound described a keen investigator, a hound close on the trail of the suspect. Sleuthhound was shortened to “sleuth” and is now used for a detective in general.

‘Twas the most important question I ever “popped”. In fact, I popped that question exactly 30 years ago, tomorrow …

There are three fencing events in the modern Olympics, distinguished by the weapon used:

57…Baseball tactic to advance a runner..BUNT

“To bunt” in baseball is to barely hit the ball, just enough to have it roll slowly in front of the infielders.

“To bate” is to restrain, as in “with bated breath”, with restrained breath. The term can also mean “to lessen”, and is a shortening of “abate”.

Iowa State University of Science and Technology (ISU) is located in Ames, Iowa. Among many other notable events, ISU created the country’s first school of veterinary medicine, in 1879. The sports teams of ISU are known as the Cyclones.

The vast majority of asteroids in the Solar System are found in the main asteroid belt, which is located between the orbits of Mars and Jupiter. Four large asteroids (Ceres, Vesta, Pallas and Hygiea) make up about half the mass of the asteroid belt and are 400-950 km in diameter. The total mass of the belt is just 4% of the mass of our Moon. The larger asteroids are also known as “planetoids”.

The first verse of the English nursery rhyme is:

Apparently, the phrase “couch potato” was coined in 1976 by one Tom Iacino of Pasadena. Iacino had a friend named Bob Armstrong who eschewed the active life and liked to lie back on the couch watching TV, the “boob tube”. This lazy guy did have the energy to send out a newsletter called “The Tuber’s Voice”, with Armstrong being the “tuber”, the one watching the “tube”. Iacino then referred to Armstrong as the “couch potato”, the tuber lying on the couch.

Something “clangorous” is clanging, making a lot of noise, especially loud and resonant sounds.

Country singer Garth Brooks retired from recording and performing in 2001. He came back out of retirement in 2009, signing a five-year concert deal with the Encore Hotel on the Las Vegas Strip.

In L. Frank Baum’s children’s novel “The Wonderful Wizard of Oz”, Dorothy lives with her Aunt Em and Uncle Henry.

Trans World Airlines (TWA) was a big carrier in the US, but was perhaps even more recognized for its extensive presence in Europe and the Middle East. For many years, especially after the collapse of Pan-Am, TWA was considered the unofficial flag carrier for the US. The company started in 1930, the product of a forced merger of Transcontinental Air Transport and Western Air Express. The Transcontinental and Western Air that resulted (the original meaning of the acronym TWA) was what the Postmaster General wanted, a bigger airline to which the Postal Service could award airmail contracts.

Pan Am started out as a mail and passenger service between Key West, Florida and Havana, Cuba in 1927. From very early in the company’s life it was the de facto representative air carrier of the United States. For many years Pan Am’s fleet was built around the Boeing 314 Clipper, a long-range flying boat that was one of the largest aircraft around at the time. Pan Am adopted the Clipper as part of its image, even using “clipper” as the call sign for its flights.

37…Veggie that can be pickled..BEET

57…Baseball tactic to advance a runner..BUNT

18…Move to a new container, as a houseplant..REPOT

41…A little banged up, fenderwise..DENTED