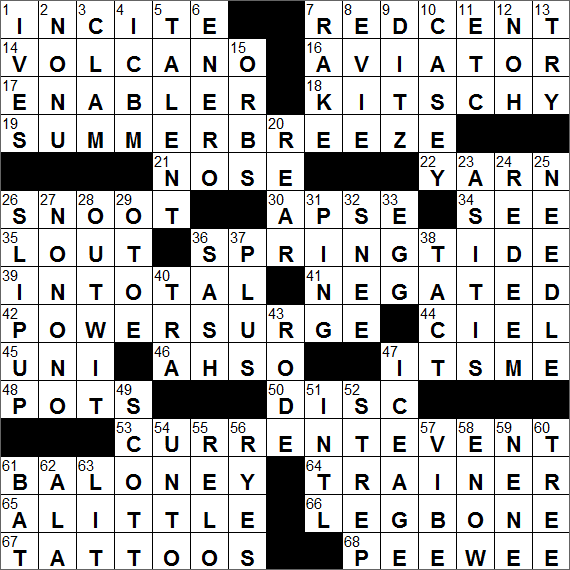 Each of today’s themed answers might be described as a CURRENT EVENT:

Something that is “not worth a red cent” has very little value. The “red” reference is to the color of a copper penny.

“Kitsch” is a German word, an adjective that means “gaudy, trash”.

In English folklore, the fairy’s anti-hero is the diminutive gnome, an evil ugly character. Over the centuries, the gnome has become more lovable so we now have garden gnomes and even the Travelocity Gnome …

“Snoot” is a variant of “snout” and is a word that originated in Scotland. The idea is that someone who is “snooty”, or snouty, tends to look down his or her nose at the rest of the world.

In the Roman Catholic Church, an episcopal see is the official seat of a bishop, and is usually described by the town or city where the bishop resides and has his cathedral. The most famous see in the church is called the Holy See, the episcopal see of the Bishop of Rome, the Pope.

36…Subject for an oceanographer..SPRING TIDE

I don’t think my kids really know what a floppy disk is. A floppy disk is made up of a thin and flexible magnetic material that can store data, enclosed in a protective case. I’ve used 8-inch floppies in my time, and many 5.25-inch floppy disks. Until fairly recently, I had a desktop that would take 3.5-inch disks, although I think the last 3.5-inch floppy disappeared from the house several years ago …

Even though the word “news” uses the initial letters from the directions north, east, west and south, the term comes from the singular “new”. Back in the 14th-century, “news” were “new things”.

“Hogwash” means “rubbish, of little value”. Hogwash was originally the name of the swill fed to pigs.

The thigh bone, the femur, is the longest and the largest bone in the human body.

The fibula is the calf bone. The fibula lies beside the tibia, with both bones sitting under the femur.

68…Teammate of Duke and Jackie..PEE WEE

Duke Snider spent most of his MLB career with the Brooklyn and LA Dodgers. After retiring from baseball, Snider did quite a bit of acting. He often played himself or some baseball player, but also appeared in shows like “The Rifleman”.

The great Jackie Robinson was the first African-American to play in baseball’s Major League. When Robinson made his first MLB appearance, for the Brooklyn Dodgers, he did so in front of over 26,000 spectators. Well over half the crowd that day were African-Americans, there to witness the event. Major League Baseball universally retired Robinson’s number 42 in 1997. However, on the annual Jackie Robinson Day, all MLB players on all teams wear #42 in his honor.

Charles Ives was one of the great classical composers, probably the first American to be so recognized. Sadly, his work largely went unsung (pun intended!) during his lifetime, and was really only accepted into the performed repertoire after his death in 1954.

Piano Sonata No. 2 by Charles Ives is often referred to as the “Concord Sonata”. It is so called because it was inspired by the works of the 19th-century Concord writers (such as Louisa May Alcott, Ralph Waldo Emerson, Henry David Thoreau and Emily Dickinson).

“Non-U” is a term used in the UK that originated in the fifties, referring to those who are “not upper class”. i.e. middle class. In effect, “the U” are the “upper” class, and “the non-U” are the middle class.

The Dong Feng 31 (DF-31) is a land-based ICBM made by China. China’s equivalent submarine-launched missile is the Ju Lang 2 (JL-2). “Dong Feng” translates as “East Wind”, and “Ju Lang” as “Giant Wave”.

“Stone Soup” is a Sundays-only comic strip written by Jan Eliot that was launched in 1995. A version of the strip ran from 1990 until 1995 under the name “Sister City”. The new name reflects the name of the Stone family that feature in the storyline, and is also a reference to the fable of the “Stone Soup”.

In the old folk story of the stone soup, some hungry travelers ask for food from a town’s locals. The travelers are rebuffed, and so go to a stream to fill a pot with water. They add a large stone and place it over a fire. They tell the locals they are making delicious “stone soup”, but it needs a garnish. One person provides some carrots, another some seasoning, another some potatoes. The process continues until there is a lovely vegetable soup that is enjoyed by everyone.

10…He was on deck when Blake was up..CASEY

Noh is a form of musical drama in Japan that has been around since the 14th century. Many of the Noh performers are masked, allowing all the roles to be played by men, both male and female parts.

The British developed the first underwater detection system that used sound waves. Research was driven by defence demands during WWI, leading to production of working units in 1922. This new sound detection system was described as using “supersonics”, but for the purpose of secrecy the term was dropped in favor of an acronym. The work was done under the auspices of the Royal Navy’s Anti-Submarine Division, so ASD was combined with the IC from “superson-ic-s” to create the name ASDIC. The navy even went as far as renaming the quartz material at the heart of the technology “ASDivite”. By the time WWII came along, the Americans were producing their own systems and coined the term SONAR, playing off the related application, RADAR. And so the name ASDIC was deep-sixed …

“Snick or snee” is the name given to cut and thrust while fighting with a knife. The phrase is rooted in a pair of Dutch words. The expression gave its name to “snickersnee” (sometimes just “snee”), a light sword-like knife.

“The Mikado” is a wonderful comic opera by Gilbert and Sullivan, set in the exotic location of Japan. “Mikado” is a former term for the “Emperor of Japan”.

The Fallopian tubes leading from the ovaries of female mammals in the uterus. The tubes are named for the 16th-century Italian anatomist Gabriello Fallopio, who was the first to describe them.

Adam Scott is a golfer from Australia who was ranked World No. 1 for a few months in 2014. Scott was the second Australian golfer to earn the top spot in the rankings, a feat last achieved by Greg Norman in 1998.

“Bombed” and “lit” are two slang terms for “drunk, intoxicated”.

19…Subject for a meteorologist..SUMMER BREEZE

36…Subject for an oceanographer..SPRING TIDE

42…Subject for an electrician..POWER SURGE

68…Teammate of Duke and Jackie..PEE WEE

10…He was on deck when Blake was up..CASEY

60…Word with farm or house..TREE