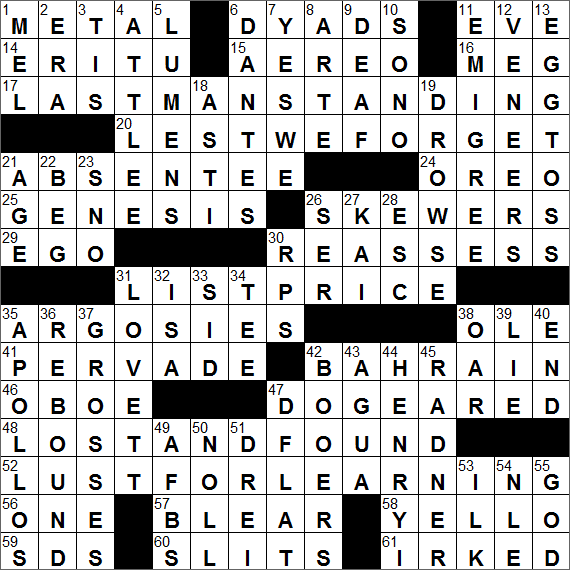 The starts of today’s themed answers give us a vowel progression through words in the format L-ST:

Every crossword constructors’ favorite aria “Eri tu” is from Verdi’s opera “Un ballo in maschera” (A Masked Ball). The opera tells the story of the assassination of King Gustav III of Sweden during a masked ball.

King of the Hill (or King of the Mountain) is a children’s game in which one player endeavors to stay at the top of a hill, while the others try to knock him or her off, to take over as “king of the hill”.

“Lest we forget” is an oft-quoted phrase, one that comes from a poem by Rudyard Kipling called “Recessional”. Kipling wrote the piece on the occasion of the Diamond Jubilee of Queen Victoria in 1897 and used it to express sadness at the waning of the British Empire. The phrase “lest we forget” is used in this context, a warning that the empire will decline. Ever since WWI we’ve been using the words on memorials as a plea not forget the sacrifices made by others in the past.

Today a “ballot” is a piece of paper used to cast a vote. Back in the 1500s, a “ballot” was a small “ball” used in the process of voting.

The English musician Phil Collins is best known for his work as drummer with the rock group Genesis, as well as for his solo career. In fact, Collins is often grouped with Paul McCartney and Michael Jackson, two other artists who had tremendous solo success after careers with very well-known bands.

A large merchant ship might be referred to as an “argosy”, especially if it carries a rich cargo. The term comes from the Croatian city of Dbrovnic, which lies on the Adriatic coast. Once called Ragusa (“Arragosa” in English), the city was the departure point for ships laden with goods imported into 16th-century Britain.

“To blear” is to dim the vision, usually with watery eyes.

Like so many beverages introduced by the Coca-Cola Company, Mello Yello was launched to compete against a successful drink already on the market. Mello Yello first hit the shelves in 1979, and was designed to take market share from Pepsico’s “Mountain Dew”.

The lumen is a measure of the amount of visible light emitted by a source.

The 2008 campaign that resulted in the election of President Barack Obama used the slogan “Change we can believe in”, along with the associated chant “Yes We Can”. The words “Yes We Can” were perhaps borrowed from the United Farm Workers, which organization uses the motto “Sí, se puede”. “Sí, se puede” translates as “Yes, it is possible” and is a phrase very much associated with labor leader Cesar Chavez.

Gallaudet University is a private school in Washington, D.C. that is focused on the education of the deaf and hard of hearing. Gallaudet was founded in 1864 and is officially a bilingual institution, with classes held in both English and ASL.

Asti is in the Piedmont region of northwestern Italy. It is perhaps most famous for its Asti Spumante sparkling white wine. Moscato d’Asti is produced from the same grape (Moscato Bianco) but is a much sweeter wine with a lower alcohol content. It is usually served as a dessert wine.

The brand name Sno-Cat is owned by the Tucker company. All “snowcats” are tracked vehicles built to work in snow, famously used in expeditions to the polar regions. The modern Sno-Cat from Tucker differs from its competitors in that it has four independently-mounted tracks.

A sermon (ser.) might be described as an inspiring message (msg.).

Kai Ryssdal is a radio journalist who is famous as the host of the weekday business program “Marketplace”. Ryssdal has been doing the job since 2005.

Galleys were large medieval ships mainly found in the Mediterranean. They were propelled by a combination of sails and oars.

Henry I of England was a son of William the Conqueror. According to legend, Henry died from eating “a surfeit of lampreys”, or more likely food poisoning. Lampreys look like a cross between a fish and an eel.

The Norman Conquest of England started in 1066 when William, Duke of Normandy defeated King Harold II of England at the Battle of Hastings. William was crowned King William I of England, and was dubbed William the Conqueror.

Gilda Radner was a comedian and actress, one of the original cast members of the hit television show “Saturday Night Live”. Radner left her first husband to marry comedic actor Gene Wilder, whom she met while they were both filming the Sidney Poitier movie “Hanky Panky”.

The Northrop Grumman B-2 Spirit is more familiarly called the Stealth Bomber. The original plan was for the US Military to buy 132 B-2 bombers but the cost became so high (over a billion dollars each in today’s money) that only 21 were actually ordered. One of these crashed in 2008 and the remaining 20 aircraft are still in service.

Chuck Noll was the head coach for the Pittsburgh Steelers from 1969 to 1991. Noll won the Super Bowl four times in all as head coach, an NFL record.

30…Adjust for the new tax year..REASSESS

13…Picnic game that can get messy..EGG TOSS