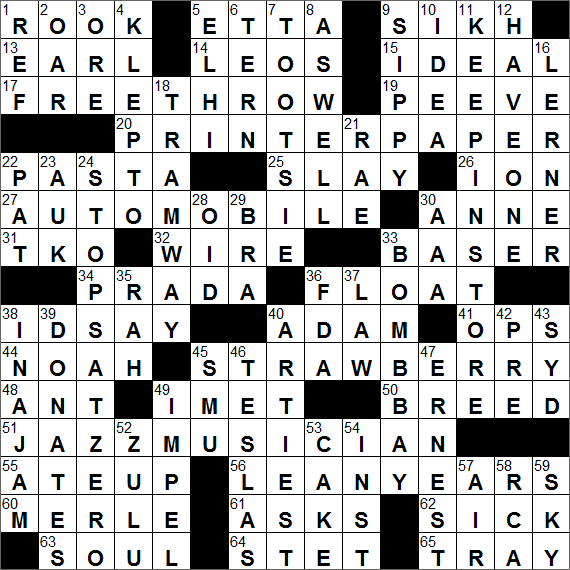 Theme: In a Jam

Each of today’s themed answers might be found IN A JAM:

Leoš Janáček is considered one of the triumvirate of great Czech composers, alongside Antonín Dvořák and Bedřich Smetana.

That would be in basketball.

In many cases, the name given to a type of pasta comes from its shape. However, the name macaroni comes from the type of dough used to make the noodle. Here in the US, macaroni is usually elbow-shaped tubes, but it doesn’t have to be.

Electrolysis is a chemical process that uses direct current passing through a solution to separate out individual chemicals in that solution. One chemical moves to the anode, and the other to the cathode.

Prada was founded in 1913 as a leathergoods shop in Milan, by the two Prada brothers. One of the brothers, Mario Prada, prevented the female members of his family participating in the company as he didn’t believe women should be involved in business (!). When the sexist brother died, his son had no interest in the business so it was his daughter who took over and ran the company for about twenty years, handing it over to her own daughter. I’d say the devil loved that …

Adam Smith was a pioneer in the field of “political economy”, an original term used for the study of production and trade and their relationship with law, government and the distribution of wealth. Adam Smith’s great work is called “The Wealth of Nations”, published in 1776. The book was a big hit within his own lifetime and went a long way to earning him the reputation as the father of modern economics and capitalism. Smith coined the phrase “the invisible hand of the market”, describing his assertion that a marketplace tends to self-regulate.

“Antigonish” is an 1899 poem penned by William Hughes Mearns. The line “I met a man who wasn’t there” is a reference to a ghost.

Yesterday, upon the stair,
I met a man who wasn’t there.
He wasn’t there again today,
I wish, I wish he’d go away…

When I came home last night at three,
The man was waiting there for me
But when I looked around the hall,
I couldn’t see him there at all!
Go away, go away, don’t you come back any more!
Go away, go away, and please don’t slam the door…

Last night I saw upon the stair,
A little man who wasn’t there,
He wasn’t there again today
Oh, how I wish he’d go away…

The pug is a breed of dog of Chinese origin. Our current family pet is a boxer/pug cross, a good-looking mutt!

Merle Haggard is a country singer and songwriter whose most famous recording has to be “Okie from Muskogee” released in 1969. Haggard will tell you that the song was actually meant as a spoof, but it has become a country “anthem”.

Back in the early 17th century, a “referee” was someone who examined patent applications. We started using the same term for a person presiding over a sporting event in the 1820s. “Referee” is derivative of the verb “to refer”, and literally describes someone who has the authority to make a decision by “referring to” a book, archive etc.

Kleptomania is the compulsion to steal, whether or not one is need of what is stolen. The term derives from the Greek word for “to steal”, “kleptein”, with the suffix “-mania”.

“To boost” is a slang term meaning “to steal” and especially “to shoplift”.

“Tootsie” is a hilarious 1982 comedy starring Dustin Hoffman in the title role, a male actor who adopts a female identity in order to land an acting job. Jessica Lange won a Best Supporting Actress Oscar for her performance in the film. “Tootsie” was also provided Geena Davis with her first movie role.

The actress Jessica Lange is also an accomplished and published photographer. She was married for ten years to Spanish photographer Paco Grande. After separating from Grande, Lange had three children with the great Russian dancer Mikhail Baryshnikov. Those must be some good-looking kids …

That would be a pat of butter, perhaps.

The word “brassière” is French in origin, but it isn’t the word the French use for a “bra”. In France what we call a bra is known as a “soutien-gorge”, translating to “held under the neck”. The word “brassière” is indeed used in France but there it describes a baby’s undershirt, a lifebelt or a harness. “Brassière” comes from the Old French word for an “arm protector” in a military uniform (“bras” is the French for “arm”). Later “brassière” came to mean “breastplate” and from there the word was used for a type of woman’s corset. The word jumped into English around 1900.

We use the word “dilettante” for someone who dabbles in the world of art or in some particular field of knowledge. We borrowed the term from Italian, in which language a dilettante is a lover of fine arts, a connoisseur.

Australia’s Sydney Airport (SYD) is located just five miles south of the city center, and next to Botany Bay. There have been plans to build a second airport on the outskirts of the city, dating back to the 1940s.

QANTAS is the national airline of Australia. The company name was originally an acronym for Queensland and Northern Territory Aerial Services.

Southern Methodist University (SMU) is located in University Park, Texas (part of Dallas), and was founded in 1911. SMU is home to the George W. Bush Presidential Library.

P!nk is the stage name of American singer Alecia Beth Moore. I known so little about “modern” music, but I do like the P!nk song “Just Give Me a Reason” …

25…Cause to roll in the aisles..SLAY

24…What many a countdown clock does..STOPS AT ZERO

59…Something to look up to..SKY