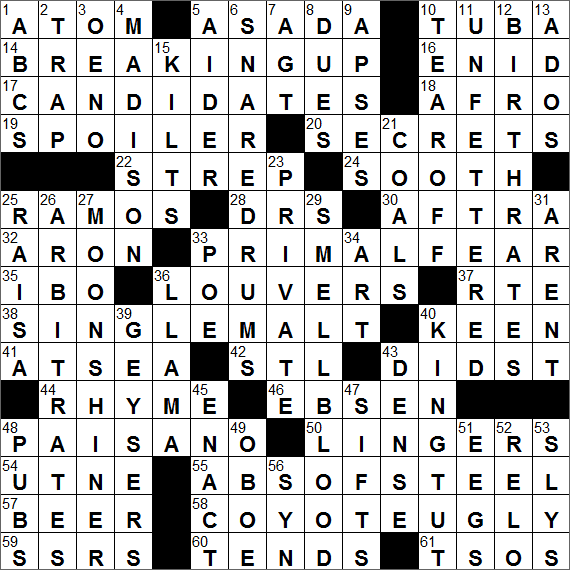 The name of the dish called “Carne Asada” translates from Spanish as “roasted meat”.

Enid Blyton wrote stories for children that were very popular when I was growing up in the British Isles. Not so long ago I purchased and reread my favorite of her stories growing up, a children’s novel called “The Secret Island”.

In William Shakespeare’s “The Merchant of Venice”, Antonio is the title character. We learn from him in the opening lines of the play that he is a melancholy character, and quite sad:

In sooth, I know not why I am so sad:
It wearies me; you say it wearies you;
But how I caught it, found it, or came by it,
What stuff ’tis made of, whereof it is born,
I am to learn;
And such a want-wit sadness makes of me,
That I have much ado to know myself.

Fidel Ramos was President of the Philippines from 1992 to 1998. I used to live in Manila, and one of my claims to fame is that I once went SCUBA diving with President Ramos. Well, I was in the same diving party, and there were three very burly guys between me and him the whole time …

John Steinbeck considered “East of Eden” his magnus opus. Most of the storyline takes place near Salinas, just south of where I live here in the Bay Area. Two of the characters in the story are brothers Cal and Aron Trask, representative of the biblical Cain and Abel.

“Primal Fear” is a very enjoyable crime-thriller film released in 1996, starring Richard Gere. The most acclaimed performance in the movie came from Edward Norton, in his film debut.

The Igbo (or Ibo) people are an ethnic group living in southeastern Nigeria.

A Global Positioning System (GPS) might point out a route (rte.).

“Flummoxed” is another lovely word, meaning confused or perplexed. It is probably of English origin, derived from some local dialect.

“Paisano” translates literally from Spanish as “fellow countryman”, but is also used to mean “pal”.

The “Utne Reader” is known for aggregation and republishing of articles on politics, culture and the environment from other sources in the media. The “Utne Reader” was founded in 1984, with “Utne” being the family name of the couple that started the publication.

The abdominal muscles (“abs”) are more correctly referred to as the rectus abdominis muscles. They are all called a “six-pack” in a person who has developed the muscles and who has low body fat. In my case, more like a keg …

“Coyote Ugly” is a film released in 2000 about New Jersey girl pursuing a career as a songwriter, while earning her keep working in the Coyote Ugly Saloon in New York City.

The suffix “-stan” in many place names is Persian for “place of”.

General Tso’s chicken is an American creation, often found on the menu of a Chinese restaurant. The name General Tso may be a reference to General Zuo Zongtang of the Qing Dynasty, but there is no clear link.

Madison is the second-largest city in Wisconsin (after Milwaukee), and is the state capital. The city was named for President James Madison, who was one of the signers of the US Constitution. Many of Madison’s first streets were named for the 39 other signatories.

Snare drums are so called because they have a set of wire strands (called snares) stretched across the bottom surface of the drum. When the drum is struck, the snares vibrate against the bottom drumhead producing a unique sound.

Raisa Gorbachova was the wife of Soviet leader Mikhail Gorbachev. There’s no doubt that Raisa’s charm and personality helped her husband as he worked to change the image of the Soviet Union.

Edgar Allan Poe lived a life of many firsts. Poe is considered to be the inventor of the detective-fiction genre. He was also the first notable American author to make his living through his writing, something that didn’t really go too well for him as he was always financially strapped. In 1849 he was found on the streets of Baltimore, delirious from either drugs or alcohol. Poe died a few days later in hospital at 39 years of age.

The Great Geysir in Iceland is the first known geyser to have been discovered and documented. The name “Geysir” comes from the Icelandic and Old Norse word “geysa” meaning “to gush”. It is the Great Geysir that gives us our English word “geyser”.

The word “preserves” is a synonym for “keeps”.

26…Resolves, as a contract dispute..ARBITRATES