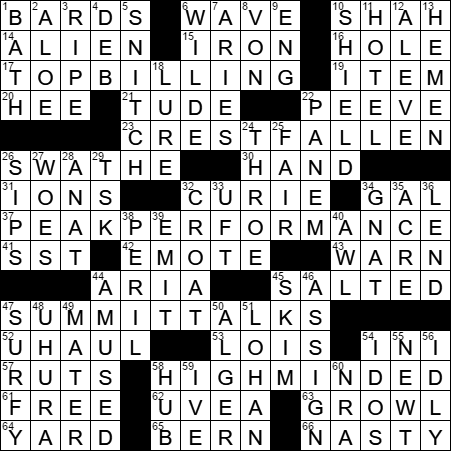 Today’s themed answers each start with something that is HIGH:

17. What the star gets on a marquee : TOP BILLING

Marie Curie lived a life of firsts. She was the first female professor at the University of Paris, the first woman to win a Nobel Prize, and indeed was the first person to win two Nobel prizes (in 1903 and 1911). Most of Curie’s work was in the field of radioactivity, and was carried out in the days when the impact of excessive radiation on the human body was not understood. She died from aplastic anemia, caused by high exposure to radiation. To this day, Curie’s personal papers are kept preserved in lead-lined boxes as they are highly radioactive, even her personal cookbook.

The most famous supersonic transport (SST) was the Concorde, a plane that’s no longer flying. Concorde had that famous “droop nose”. The nose was moved to the horizontal position during flight to create the optimum aerodynamic shape thereby reducing drag. It was lowered during taxi, takeoff and landing, so that the pilot had better visibility. The need for the droop nose was driven largely by the delta-shaped wings. The delta wing necessitates a higher angle of attack at takeoff and landing than conventional wing designs, so the pilot needed the nose lowered so that he or she could see the ground.

Lois Lane has been the love interest of Superman/Clark Kent since the comic series was first published in 1938. Lois and Clark both work for the big newspaper in the city of Metropolis called “The Daily Planet”. The couple finally got hitched in the comics (and on television’s “Lois and Clark”) in 1996. But never mind all that … one has to wonder how challenging the crossword is in “The Daily Planet” …

Bern (sometimes “Berne”) is the capital city of Switzerland. The official language of the city is German, but the language most spoken in Bern is a dialect known as Bernese German.

“Deb” is short for “debutante”, which translates from French as “female beginner”.

The von Trapps portrayed in the musical “The Sound of Music”, was a real family, as is well known. In the musical and film, the eldest daughter is “Liesl”, although in real life her name was Agathe. Agathe came with her family to the US in 1938, and operated a private kindergarten in Baltimore, Maryland for 35 years. Agathe passed away in 2010.

A man described as “macho” shows pride in his masculinity. “Macho” is a Spanish word for “male animal”.

“The Hunger Games” is a 2008 novel by Suzanne Collins, the first in a trilogy of titles that also includes “Catching Fire” (2009) and “Mockingjay” (2010). “The Hunger Games” was adapted into a very successful movie released in 2012, with the sequels following soon after. Amazon.com reports more sales of “The Hunger Games” series books than even the “Harry Potter” series.

Zagreb is the capital city of the European Republic of Croatia. Zagreb has been around a long, long time, and dates back to the diocese of Zagreb that was founded at the end of 11th century.

The United Federation of Teachers (UFT) is a union representing the majority of teachers in the public schools of New York City.

The fatty component of milk is known as butterfat (sometime “milkfat”). To be labeled “whole” milk, the butterfat content must be at least 3.25%. Lowfat milk is defined as milk containing 0.5-2% fat, with levels of 1% and 2% commonly found on grocery store shelves. Skim milk must contain less than 0.5% fat, and typically contains 0.1%.

Horatio Alger was an American writer of the late nineteenth century. Alger was a prolific writer of novels for young people and creates tales of poor children making it good in the world, achieving the American dream as it were.

I think that actress Lindsay Lohan’s big break was in the Disney remake of “The Parent Trap” in 1998. I’ve really only enjoyed one of Lohan’s films though, “Freaky Friday” from 2003 in which she stars alongside the fabulous Jamie Lee Curtis.

“Liz & Dick” is a 2012 TV movie about the up-and-down relationship of movie stars Elizabeth Taylor and Richard Burton. “Liz” Taylor is played Lindsay Lohan, and “Dick” Taylor by Grant Bowler. I haven’t seen this one, but I’d imagine there’s a great story to be told. But the critics, they didn’t like it much …

14. From another planet : ALIEN

17. What the star gets on a marquee : TOP BILLING

26. Wrap tightly, as in bandages : SWATHE