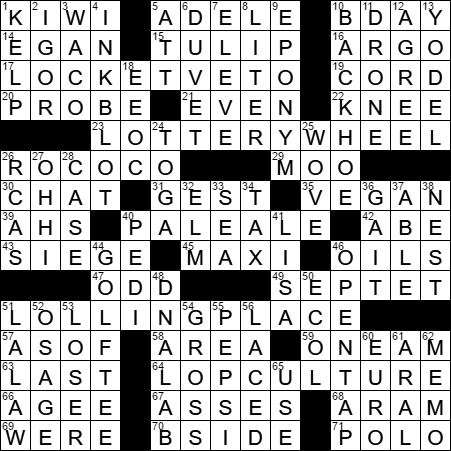 Today’s themed answers are well-known phrases, but with the opening letters PO swapped with the letters LO:

New York cop Eddie Egan was responsible for breaking up an organized crime ring in the city in 1961, and the seizing of a record amount of heroin (112 pounds). His exploits were chronicled in a book by Robin Moore, which in turn was the basis of the movie “The French Connection” released in 1971. Gene Hackman played Popeye Doyle in the movie, the character based on Egan. Paradoxically, when Egan retired from the police force he started acting and played small roles in 22 movies and television shows.

The constellation Argo Navis (“Argo the Ship” in Latin) is no longer officially recognized. Instead, it has been divided into its constituent parts: Puppis (“The Poop Deck”), Vela (“The Sails”) and Carina (“The Keel”).

The term “pants”, meaning trousers, is an abbreviated form of “pantaloons” that first appeared in the 1840s. Pantaloons were a kind of tights named for a silly old male character in Italian comedy called “Pantaloun” who always wore tight trousers over skinny legs.

Our word “gest” meaning a great deed or an exploit has been around since about 1300, and comes from the Old French word “geste” meaning the same thing. These days “geste” can also mean “gesture”.

A vegan is someone who stays away from animal products. A dietary vegan eats no animal foods, not even eggs and dairy which are usually eaten by vegetarians. Ethical vegans take things one step further by following a vegan diet and also avoiding animal products in other areas of their lives e.g. items made from leather or silk.

Supposedly, there were seven separate settlements on the top of seven hills east of the River Tiber, prior to the founding of the city of Rome. Tradition dictates that Romulus founded Rome on one of these hills, Palatine Hill, and the city came to encompass all seven existing settlements. The most famous hill in modern-day Rome is probably Vatican Hill, but it lies outside of walled ancient city.

Our word “hammock” comes via Spanish from Haiti, evolving from a word used there to describe a fishing net.

Aram Khachaturian was a Soviet-Armenian composer who created many works that were influenced by Armenian culture. Khachaturian’s most famous piece of music is the frenetic “Saber Dance” from the ballet “Gayane”. My favorite composition though is the “Adagio of Spartacus and Phrygia”. It was used as the theme for a BBC drama called “The Onedin Line” and will always evoke for me images of tall ships and vast oceans.

71. Sport that hints at this puzzle’s theme : POLO

Kelps are large seaweeds that grow in kelp forests underwater. Kelps can grow to over 250 feet in length, and do so very quickly. Some kelps can grow at the rate of 1-2 feet per day.

Igor Sikorsky was a Russian pioneer in the world of aviation. He designed and indeed piloted the world’s first multi-engine, fixed-wing aircraft in 1913. He moved to the US in 1919 and set up his own aircraft manufacturing business. In the thirties he made the magnificent flying boats that were used by Pan Am in their Clipper era. Sikorsky also developed the world’s first mass-produced helicopter, in 1942.

The Chisholm Trail was used in the late 1800s by ranchers driving their cattle from Texas to the stockyards and railroad termini in Kansas. The trail was named for Jesse Chisholm who operated trading posts along much of the route.

The French word “élève” can be translated as “pupil, student”.

The Sorbonne is the name usually used for the old University of Paris, and some of the institutions that have succeeded it.

An eponym is a name for something derived from the name of a person, as in the “sandwich” named for the Earl of Sandwich.

The industrialist Henry Ford was born in Michigan, and was the son of an Irish immigrant from County Cork. Ford’s most famous vehicle was the one that revolutionized the industry: the Model T. Ford’s goal with the Model T was to build a car that was simple to drive and and easy and cheap to purchase and repair. The Model T cost $825 in 1908, which isn’t much over $20,000 in today’s money.

The excavating equipment known as a backhoe is named for the way the vehicle’s shovel works. A backhoe digs by pulling earth “backwards”, and not by lifting it forward like a person shovelling or how a bulldozer works. I always thought that the “back” referred to the location of the shovel on the vehicle, and I was wrong …

That could be a case of wine, perhaps.

Lisa Lisa and Cult Jam was a band that was active in the late eighties and early nineties. Lisa Lisa is the stage name of musician Lisa Velez.

In a statement of accounts, gross profit is the difference between revenue from sales and the cost of making goods or providing a service. So-called fixed costs, of overhead, payroll, taxes and interest payments are not included in gross profits. When these fixed costs have been deducted, what is left is called the net profit, also known as “the bottom line”.

The peseta is the former currency of Spain, replaced by the euro in 2002.

23. Spinner in a numbers game? : LOTTERY WHEEL (from “pottery wheel”)

71. Sport that hints at this puzzle’s theme : POLO