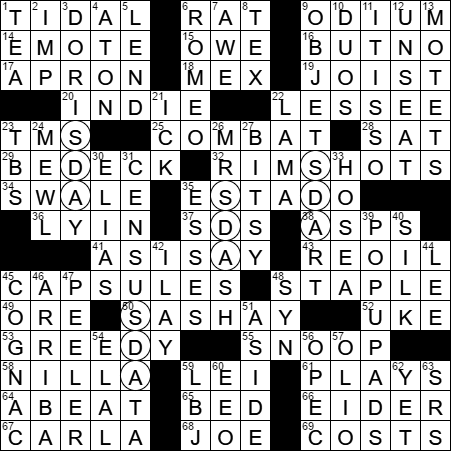 Today’s themed answers are written in the down-direction, and each contains the hidden letter sequence SDA. And, SDA reads ADS when written “UP”. So, we have some hidden POP-UP ADS:

A tidal basin is an area that fills with water at high tide, and then that water level is maintained by artificial means. I used to live in a village on the East Coast of Ireland where there was a saltwater swimming pool that would be filled by the high tide twice a day. The same principle I guess.

“Odium” is a strong dislike or aversion. The term is Latin in origin and relates to the Latin word “odi” meaning “I hate”.

In a building, a joist is a supporting member running horizontally to support a ceiling or floor.

The Sundance film festival is the largest independent film event in the country, and takes place every year around the Sundance Resort near Provo, Utah. The festival has its roots in the Utah/US Film Festival which started in Salt Lake City in 1978. Management of the festival was taken over by Robert Redford’s Sundance Institute in 1985. The festival has became a bit of a media feeding frenzy in recent years, as a lot of A-list celebrities attend. The Festival organizers introduced a “Focus on Film” campaign in 2007 to try to offset some of the madness.

A rimshot is a sound made when a drummer hits the head of a drum and the rim at the same time. It’s a sound often used by comics to help punctuate a gag.

The Eagles song “Lyin’ Eyes” was recorded in 1975. Written by band members Don Henley and Glenn Frey, the lyrics were inspired by a meeting between a man and a woman the composers witnessed in Dan Tana’s Bar & Restaurant in Los Angeles. Henley and Frey imagined a scenario of secret love, and “Lyin’ Eyes” was born.

Swingline is a manufacturer of office staplers that was founded in New York City in 1925.

To “sashay” is to strut along in a showy manner. “Sashay” is an Anglicized form of the French word “chassé”, a sliding step used in square dancing.

As one might expect, “Nilla” is a shortened from of “vanilla”. However, you won’t find any vanilla in Nilla brand cookies or wafers. They have always been flavored with vanillin, which is synthetic vanilla. Is nothing sacred …?

The very glamorous Carla Bruni is the wife of French President Nicolas Sarkozy. She is Sarkozy’s third wife, and this is the first marriage for Bruni. The couple met at a dinner party in November 2007 and were married just three months later. Bruni was born in Italy and was granted French nationality not long after the marriage.

“Pillow Talk” is a marvelous romantic comedy from 1959 that stars Rock Hudson and Doris Day, with Tony Randall in a supporting role. The same trio of actors starred in a trio of movies together: “Pillow Talk” (1959), “Lover Come Back” (1961) and “Send Me No Flowers” (1964).

10. Lucy and Ethel and Thelma and Louise : DUOS

In the hit television show “I Love Lucy”, Lucille Ball and Desi Arnaz played Lucy and Ricky Ricardo. The Ricardos’ best friends were also their landlords, Fred and Ethel Mertz. The Mertz’s were played by William Frawley and Vivian Vance.

“Thelma & Louise” is a thought-provoking movie, but one that is very entertaining. It was directed by Ridley Scott in 1991, and stars two fabulous leads in Geena Davis and Susan Sarandon. You’ll also spot Brad Pitt in there as well, in his first significant movie role.

A motet is a simple musical composition based on a sacred text, usually sung without an accompaniment. The term “motet” is a diminutive form of “mot”, the French for “word”.

“Lama” is a Tibetan word, meaning “chief” or “high priest”.

“To mewl” is to cry weakly like a baby, with the word being somewhat imitative.

The original census was taken during the days of the Roman Republic, and was a reckoning of all adult males who were fit for military service. The first US Census was taken in 1790, and was conducted by Federal marshals.

I’ve always thought that Lee Marvin was a very talented actor. Marvin had an amazing voice, and the appearance of a man who was hard and villainous. Yet he was able to break free from the villain roles in which he was typecast and played some characters with more depth. He won an Academy Award for his dual-role performance in 1965’s “Cat Ballou”. His totally unique rendition of the song “Wand’rin Star” from the 1969 musical film “Paint Your Wagon” made it to number one in the UK charts, keeping the Beatles hit “Let it Be” in the number two spot. I’ll bet that surprised even Marvin himself!

“Cat Ballou” is a 1965 film, a comedy western starring Jane Fonda in the title role and Lee Marvin in dual roles, for which Marvin won his only Oscar. The movie is based on a novel of the same name by Roy Chanslor. The novel was a serious and a quite dark work, but it was lightened up for the big screen.

Courvoisier is a brand of cognac that is produced in the commune of Jarnac in southwestern France. Legend tells us that Napoleon Bonaparte took several barrels of Courvoisier with him to the island of St. Helena, where he died in exile. The English officers on the ship who transported the former emperor regularly sampled the barrels and named it “The Cognac of Napoleon”, words which appear on every bottle that is produced today.

After President John F. Kennedy was assassinated, Vice President Lyndon B. Johnson was sworn into office on Air Force One as is stood parked on Love Field in Dallas. US District Judge Sarah T. Hughes, a personal friend of the new president, conducted the swearing in ceremony. To this day, Justice Hughes is the only woman to have sworn in a US President.

10. Lucy and Ethel and Thelma and Louise : DUOS

39. Web irritants … and what appears in each set of puzzle circles? : POP-UP ADS

51. Words for the audience : ASIDE