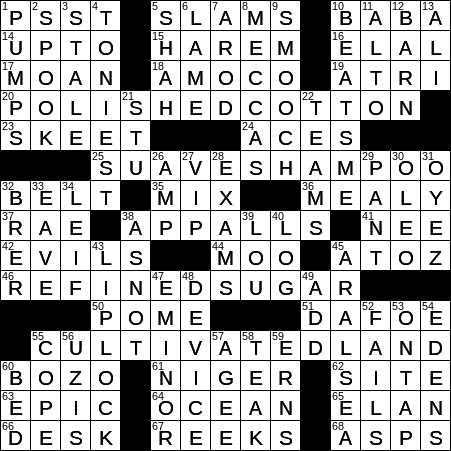 Today’s themed answer each start with a synonym of “classy”.

“Harem” is a Turkish word, derived from the Arabic for “forbidden place”. Traditionally a harem was the female quarters in a household in which a man had more than one wife. Not only wives (and concubines) would use the harem, but also young children and other female relatives. The main point was that no men were allowed in the area.

“Amoco” is an abbreviation for “American Oil Company”, an oil company that merged with BP in 1998. Amoco had been the first oil company to introduce gasoline tanker trucks and drive-through filling stations. I wonder did they know what they were starting …?

The fabric known as “polished cotton” is a plain weave cotton with a smooth and shiny surface. That sheen is often achieved by passing the fabric between heated rollers under pressure, a process known as “calendering”. The sheen is sometimes enhanced by adding a resin treatment.

Suave is a line of personal care products from Unilever. The original Suave product was a hair tonic that was introduced in 1937.

Guernsey cattle were originally bred on Guernsey in the British-owned Channel Islands. Guernsey cows are famous for the rich flavor of their milk.

Willem Dafoe is an American actor, from Wisconsin. He was born just plain William Dafoe, but didn’t like being called “Billy”. So, he changed his name to Willem, which was the pronunciation of his name by his Scottish babysitter. Those Scots …

Bozo the Clown is a character created in 1946 by Alan Livingston. Bozo was introduced in the first ever “record reader”, a children’s illustrated read-along book that came with a vinyl recording of the story. The book/record was so successful that Bozo moved to television, and he has been around ever since.

61. African country whose name is contained in the name of its southern neighbor : NIGER

Niger shares a border with Nigeria in the south.

Nigeria is in West Africa, and it takes its name from the Niger River which flows through the country. Nigeria is the most populous country on the continent, with over 170 million inhabitants. It is also the most populous member of the Organization of the Petroleum Exporting Countries (OPEC).

A porthole is a circular window in the side of a ship that provides light and air. As it penetrates the hull of the ship, the porthole cover provides a strong, watertight seal. The name “porthole” has nothing to do with the port side of a ship, and rather is derived from the French word “porte” meaning “door”. Henry VI of England hired a French shipbuilder to come up with a way mount large guns on his warships, below the upper deck. The design called for holes in the hull, and “doors” (“portes”) to be fitted for use in heavy weather.

Something described as “tony” is elegant or exclusive. “Tony” is derived from the word “tone”.

In the folk tale “Ali Baba and the Forty Thieves”, the title character is a poor woodcutter who discovers the magic words “open sesame” that open the thieves’ den.

The Chicago Bears were founded in Decatur, Illinois in 1919 and moved to Chicago in 1921. The Bears are one of only two franchises in the NFL that were around at the time of the NFL’s founding (the other is the Arizona Cardinals, who were also based in Chicago in 1921).

61. African country whose name is contained in the name of its southern neighbor : NIGER