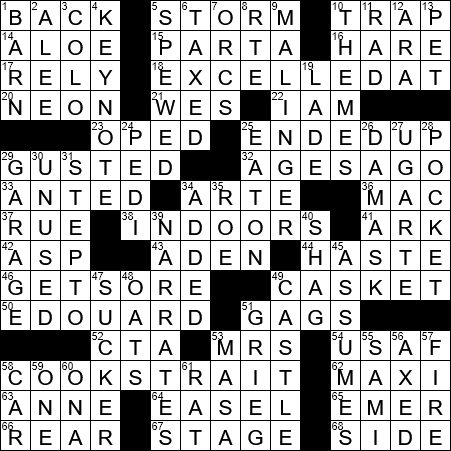 Today’s answers all lie WITHIN DOORS, in that the answers around the border of the grid are all DOORS:

Most sinks in a home have a P trap in the outlet pipe that empties into the sewer line. This P trap has at its heart a U-bend that retains a small amount of water after the sink is emptied. This plug of water serves as a seal to prevent sewer gases entering into the home. By virtue of its design, the U-bend can also capture any heavy objects (like an item of jewelry) that might fall through the plughole. But the “trapping” of fallen objects is secondary to the P trap’s main function of trapping sewer gases.

Arte Johnson, as well being a frequent judge on “The Gong Show”, played the German soldier on “Rowan & Martin’s Laugh-In”. Johnson’s character’s famous catchphrase was, “Very interesting, but …”

Our word “alfresco” means outdoors, in the fresh air. The term derives from the Italian “al fresco”, which translates as “in the fresh (air)”.

The 2014 epic film “Noah” stars Russell Crowe in the title role, and is based on the biblical story of “Noah’s Ark”. The film was largely shot in Southern Iceland. Scenes that included the ark itself were shot in Upper Brookville, New York at the Planting Fields Arboretum.

The historic commercial center of Chicago is known as the Loop. One theory is that the “loop” got its name from the cable loops in the city’s old cable car system.

Cook Strait is the narrow waterway between the North and South Islands of New Zealand. The South Pacific Ocean lies to the north of the strait, and the Tasman Sea lies to the south. It is named for British explorer James Cook, who in 1769 was in command of the first European vessel to pass through.

Great Sand Dunes National Park in Colorado is home to the tallest sand dunes on the continent, with some rising about 750 feet. It is a spectacular and very special location …

The “keynote” is the lowest note in a musical scale, as one might imagine. The term started to be used to mean a leading idea in the late 1700s, and the expression “keynote address” dates back to 1905.

A motif is a recurring element in an artistic work or design.

Damask was originally a weaving technique associated with the Byzantine and Islamic weaving centers of the Middle Ages. “Damask” comes from the name of Damascus which was a major trading city at that time.

Pita is a lovely bread in Middle-Eastern and Mediterranean cuisines. Pita is usually round, and has a “pocket” in the center. The pocket is created by steam that puffs up the dough during cooking leaving a void when the bread cools.

A lollipop is piece of candy on a stick. The name “lollipop” surfaced in 1908, and was taken from a prominent race horse of the day name Lolly Pop.

In the notation used to record moves in games of chess, castling with the kingside rook can be recorded as O-O, and with the queenside rook as O-O-O.

A tamale is a traditional dish from Central America composed of a starchy dough that is steamed or boiled in a wrapper made from a corn husk or banana leaf. The dough is called masa, and can include many different ingredients including meat, cheese fruit and vegetables.

Pepsi ONE is so called as it has one calorie per eight-ounce serving. The artificial sweetener known as Ace-K was approved by the FDA for use in our food in 1998, and one hour after the approval was given, PepsiCo announced the introduction of Pepsi ONE …

Bruce Springsteen is a rock singer and songwriter, famously from New Jersey. A lot of Springsteen’s works are centered on his home state and the American heartland. His most famous album is “Born in the USA”, which was released in 1984. Springsteen lives in New Jersey, with his wife Patti Scialfa and their children.

18. Had superior skills in : EXCELLED AT