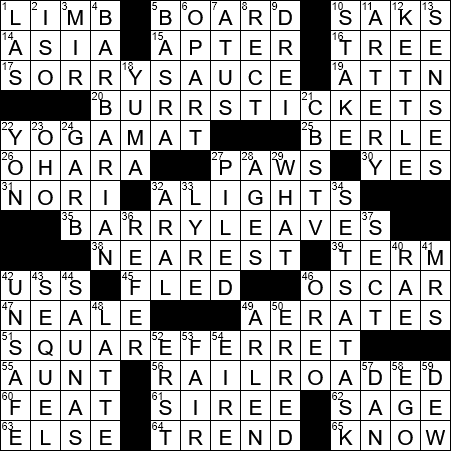 Today’s themed answers are common phrases that have been “RAILROADED”, with the letters RR inserted:

Béchamel sauce is a roux made from butter and flour cooked in milk. It is sometimes known simply as white sauce. Béchamel is also considered the “mother sauce” in French cuisine as it is the base of other sauces. For example, Mornay sauce is béchamel with cheese.

Soy sauce is made by fermenting soybeans with a mold, in the presence of water and salt. Charming …

Aaron Burr was the third vice-president of the US, serving under Thomas Jefferson. In the final year of his term in office, Burr fought an illegal duel and killed his political rival Alexander Hamilton. Burr wasn’t brought to justice, but he did pay the price politically. Thomas Jefferson dropped him from his ticket in the election held the following year.

A “scofflaw” is someone who flouts the law, although usually the term applies to folks commit misdemeanors such as jaywalking and not paying parking fines.

35. What happens at the end of a Manilow concert? : BARRY LEAVES (from “bay leaves”)

Barry Manilow’s real name is Barry Alan Pincus. Barry took his mother’s family name, Manilow, as the time of his Bar Mitzvah. When he was young, Manilow attended the Juilliard performing arts school, and then practiced his craft on the New York City music circuit. He worked in the sixties and seventies writing jingles for advertisements. “Like a good neighbor, Statefarm is there …”, that’s the work of Mr. Manilow!

42. Letters with Arizona or Maine : USS

The USS Arizona Memorial in Pearl Harbor sits across the sunken hull of the battleship, the resting place of 1,102 out of 1,117 sailors of the Arizona who were killed during the 1941 attack. After the attack, the superstructure of the Arizona protruded above the surface of the water. This was removed during and after WWII, leaving just a submerged hull. The memorial itself was approved by President Eisenhower in 1958, and the building was opened in 1962. In 1999, the battleship USS Missouri was permanently moored in Pearl Harbor, docked nearby and perpendicular to the Arizona. It was on the Missouri that the Japanese surrendered, marking the end of WWII.

The USS Maine was a pre-dreadnought battleship launched in 1890. The Maine sunk in Havana Harbor in 1898 due to a massive explosion. A Naval Court of Inquiry found that the explosion was caused by a mine, a finding that helped precipitate the start of the Spanish-American War that began one month later. Those advocating the war were often heard crying, “Remember the Maine! To hell with Spain!”

“Harlem Renaissance” is the term used to describe a cultural movement in the 1920s that was known at the time as the “New Negro Movement”. The movement involved new cultural expression by African Americans that was centered mainly in urban areas in the northeast and midwest, and that was especially vibrant in New York City’s Harlem neighborhood.

Aunt Bee was a character in “The Andy Griffith Show”. The character’s full name was Beatrice Taylor but everyone in Mayberry called her “Aunt Bee”. In the storyline she was the aunt of the protagonist, Sheriff Andy Taylor, and great-aunt to Andy’s son Opie. Aunt Bee was played by actress Frances Bavier.

The Spanish suffix “-ista” indicates a supporter or follower. Examples would be “fashionista” (a follower of fashion) and “Sandinista” (member of a Nicaraguan political party named for revolutionary Augusto César Sandino).

The Russian Mir Space Station was a remarkably successful project, with the station still holding the record for the longest continuous manned presence in space, at just under ten years. Towards the end of the space station’s life however, the years began to take their toll. There was a dangerous fire, multiple system failures, and a collision with a resupply ship. The Russian commitment to the International Space Station drained funds for repairs, so Mir was allowed to reenter the Earth’s atmosphere and burn up in 2001. “Mir” is a Russian word meaning “peace” or “world”.

Vince Gill is a country music singer-songwriter. Gill has been honored with 20 Grammy Awards, which is more than any other male country singer.

NCIS is the Naval Criminal Investigative Service, which investigates crimes in the U.S. Navy and Marine Corps. The service gives its name to the CBS TV show “NCIS”, a spin-off drama from “JAG” in which the main “NCIS” characters were first introduced. The big star in “NCIS” is the actor Mark Harmon. “NCIS” is now a franchise, with spinoff shows “NCIS: Los Angeles” and “NCIS: New Orleans”.

“To decimate” is wipe out a large proportion of a population. The term arose in the from the ancient practice of punishing military units found guilty of mutiny. One in ten soldiers in the rebellious group would be executed, with the choice made in a lottery. The term comes from the Latin “decimare” meaning “to remove one-tenth”.

“The Bourne Supremacy” is the 2004 sequel to the excellent 2002 movie “The Bourne Identity”. Both films star Matt Damon, and are based on the Robert Ludlum novels of the same name.

As my Finnish-American wife will tell you, “sauna” is a Finnish word, and is correctly pronounced “sow-nah” (with “sow” as in the female pig).

The person who serves coffee in a coffee shop is often called a “barista”. “Barista” is the Italian for “bartender”.

Gilda Radner was a comedian and actress, and one of the original cast members of the hit television show “Saturday Night Live”. Radner left her first husband to marry comedic actor Gene Wilder, whom she met while they were both filming the Sidney Poitier movie “Hanky Panky”.

Chevy Chase is a comedian and actor from Lower Manhattan who was born into a wealthy New York City family who can trace its heritage back to the Mayflower. Chase’s real name is Cornelius and he was given his nickname “Chevy” by his grandmother who took it from the old English song The Ballad of Chevy Chase”.

Dan Aykroyd is a Canadian comedian and actor, born in Ottawa, Ontario, although he is now a naturalized US citizen. He was of course an original cast member on “Saturday Night Live” and, along with John Belushi, fronted the Blues Brothers.

22. Something to stretch out on : YOGA MAT

35. What happens at the end of a Manilow concert? : BARRY LEAVES (from “bay leaves”)

42. Letters with Arizona or Maine : USS

49. Does some lawn maintenance : AERATES

56. Convicted hastily and unfairly … or, in a way, like the four other longest puzzle answers? : RAILROADED

60. It requires some effort : FEAT