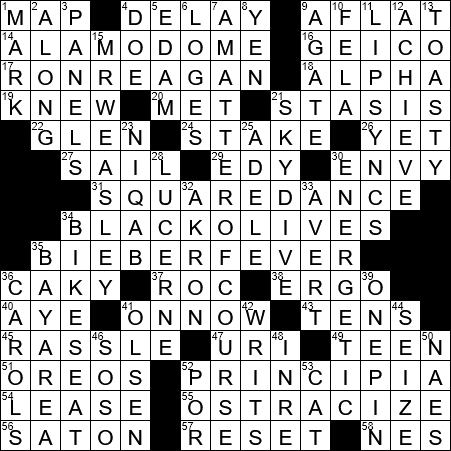 English composer Sir Edward Elgar completed two symphonies in all. His “Symphony No. 1” was first performed in Manchester, England in 1908 when the composer was 61 years old. It was an immediate success, and was destined to have over one hundred performances in Europe and America within a year of its première.

Sir Edward Elgar was the quintessential English composer, inextricably associated with his “Pomp and Circumstance” marches (including “Land of Hope and Glory”) and the “Enigma Variations”.

The Alamodome in San Antonio, Texas opened for business in 1993. The Alamodome was home to the San Antonio Spurs basketball team from 1993 to 2002. Today, the facility hosts many sporting events, including football and ice hockey games. It is also used as a convention center.

The Gecko is the “spokes-lizard” for GEICO. When the Gecko was introduced in 1999, he was voiced by actor Kelsey Grammer of “Cheers” and “Frasier” fame. Since then, the Gecko has been voiced by British radio presenter Dave Kelly and most recently by actor Jake Wood, who plays Max Branning on the British soap opera “EastEnders”.

In addition to the famous gecko, GEICO commercials also feature Maxwell the Piggy. Maxwell, shouts out a long “whee, whee, whee” all the way home.

Ron Reagan’s views couldn’t be any further from those of his father President Ronald Reagan, I’d say. Before the radio network Air America went bust, Ron had a daily 3-hour spot, and these days he makes frequent appearances on MSNBC. Young Reagan is also a good dancer, and for a while was a member of the Joffrey Ballet.

Roc-a-Fella Records was founded in 1996 by three rap artists: Jay-Z, Damon Dash and Kareem “Biggs” Burke. But, I really don’t do rap …

“The sticks” is a slang term meaning “rural area”.

The University of Rhode Island (URI) was chartered as an agricultural school, back in 1888. Rhody the Ram was chosen as the school’s mascot in 1923, a nod to URI’s agricultural past. As a result, the school’s sports teams are known as the Rams. URI’s main campus is located in the village of Kingston.

Sir Isaac Newton’s 1687 publication “Principia” lays out his laws of motion and his law of universal gravitation. The full title of the work is “Philosophiæ Naturalis Principia Mathematica” (“Mathematical Principles of Natural Philosophy” in Latin).

In Ancient Greece a “drinking party” was called a “symposium” (just like today!). Often the drink was a mixture of water and wine that was placed in a large vase, called a krater, in the center of the room. Participants in the symposium would dip a smaller vessel into the krater to refill their drinking cups. And yes, “krater” is the root for our word “crater”.

In most theaters today, “loge” is the name given to the front rows of a mezzanine level. Loge can also be used for box seating.

Fela Kuti was a Nigerian musician, a pioneer in the genre known as “Afrobeat”. Fela had an interesting relationship with women, and actually married twenty-seven different women in the same year, in 1978. He then slowed down a little and maintained a rotating roster of only twelve wives at any one time. Fela died from AIDS in 1997.

The term “parachute” was coined in 1784 by Frenchman François Blanchard, from “para-” meaning “defence against” and “chute” meaning “a fall”.

The Swiss city of Lucerne lies in the center of the country, in the German-speaking region. It is a popular tourist destination located on the shores of Lake Lucerne. One of the city’s most visited landmarks is the Chapel Bridge, the oldest covered wooden bridge in Europe. The Chapel Bridge is no small structure, being 670 feet long, and spanning the Reuss River. It was built in 1333!

Redwood City is located in the San Francisco Bay Area, about halfway between San Francisco and San Jose. Redwood City uses an interesting slogan: “Climate Best by Government Test”. This is a reference to a climatological survey conducted jointly by the US and German governments prior to WWI. The survey rated the California city’s climate the best in the whole world, tied with Canary Islands and the Mediterranean coast of North Africa. I’m not sure that’s still the case …

Elizabeth Olsen is an actress and singer, and the younger sister of the famed Olsen twins Mary-Kate and Ashley.

“Nae” is the Scottish vernacular for “no”.

Portugal is the most westerly country in Europe, and is located in the west of the Iberian Peninsula alongside Spain. The name “Portugal” comes from the Latin “Portus Cale”, the name used by ancient Romans for Porto, now the country’s second largest city. Portugal was a far-reaching power in the 15th and 16th centuries, at the center of the world’s first truly global empire. A legacy of the Portuguese Empire is that today there are more than 240 million Portuguese speakers across the world.

I think that we’re looking at cats playing with balls, batting at them.

31. Event with a caller : SQUARE DANCE

7. Standard procedure : A MATTER OF COURSE