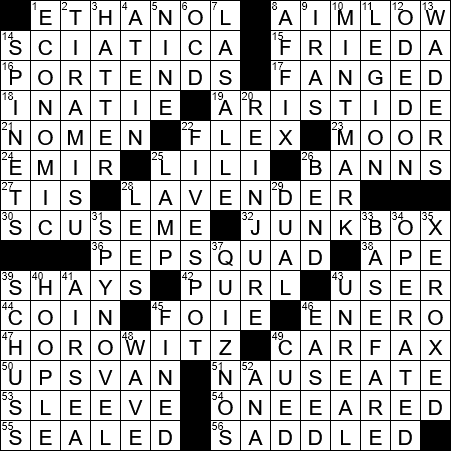 1. The punch in Planter’s Punch : ETHANOL

Planter’s Punch is a cocktail that may have originated in the Planters Hotel in Charleston, South Carolina some time in the 19th century, hence the name. It is a rum-based cocktail that also includes several fruit juices, grenadine and Angostura bitters.

Sciatica is pain caused by compression and inflammation of one or both of the sciatic nerves that run from the lower back down to the lower legs.

Charles Schulz introduced the Frieda character in the sixties. She is a little girl with a head of curly, red hair. Schulz modeled Frieda on his longtime friend from real life Frieda Rich, a local artist from Minneapolis.

The scales covering the tip of a rattlesnake’s tail are made of keratin, the same structural protein that makes up the outer layer of human skin, as well as our hair and nails. The rattlesnake shakes its tail vigorously to warn off potential predators, causing the hollow scales to vibrate against one another and resulting in that scary “rattle” sound. The rattler’s tail muscles “fire” an incredible fifty times a second to achieve that effect, demonstrating one of the fastest muscular movements in the whole animal kingdom.

John-Bertrand Aristide is a Haitian native. When he was 29 years old he entered the priesthood, after having studied in Italy, Greece and Israel. He served as a priest in Haiti under the brutal regimes of François “Papa Doc” Duvalier and his son, Jean-Claude “Baby Doc”. Aristide became an outspoken critic of the dictators, and many times incurred their wrath. While still a priest, he was elected to the office of president, in the country’s first democratic election. Aristide was also an outspoken critic of the church, and in 1994 left the priesthood, getting married 12 months later.

The actress Lili Taylor had supporting roles in films like “Mystic Pizza”, “The Haunting” and “Rudy”. She also had a recurring role in the HBO series “Six Feet Under”.

In the Christian tradition, the banns of marriage are the public announcement posted in a parish church of an intended marriage. The banns are intended to give anyone a chance to raise any valid objections to the union.

“Lavender” is the common name for the plant genus Lavandula. Lavender is used as an ornamental plants, as a culinary herb and for the production of essential oils. The plant’s name might ultimately be derived from the Latin word “lavare” meaning “to wash”, a reference to the use of essential oils in bathing.

A chaise is a light carriage with a folding hood that transports one or two people. “Chaise” is the French for “chair”, and takes its name from the “sedan chair” means of transportation. In the US, the name “chaise” evolved into “shay”.

As all of us knitters know, the purl stitch and knit stitch are very similar, one being sort of the inverse of the other. Yes, I’ve knitted a few sweaters in my day …

Vladimir Horowitz was a classical pianist from Kiev who escaped to the West in 1925, and then settled in the US. Horowitz was married to Wanda Toscanini, daughter of the famed Italian conductor Arturo Toscanini.

The term “praying mantis” is often used for species of insects more correctly called simply “mantises”. The familiar term refers to the prayer-like posture adopted by the insect with their fore-limbs folded. Strangely, the praying mantis is the only animal that we know with only one ear. That ear is located deep in the thorax or chest.

Back in the 1930s, Earl Tupper was working at the DuPont Chemical Company, and from DuPont obtained inflexible pieces of polyethylene slag. Tupper purified the slag and shaped it into unbreakable containers. He added airtight lids with a “burping seal”, which were provided tight seals similar to that provided by the lids on paint cans. He called his new product Tupperware.

2. Dessert with a kick : TIRAMISU

Tiramisu is an Italian cake. The name “tiramisu” translates from Italian as “pull me up”, and is often translated into our English phrase “pick-me-up”.

The French explorer René-Robert Cavelier, Sieur de La Salle claimed the Mississippi River basin for France in 1682. He named the region “La Louisiane” in honor of Louis XIV, who was King of France at that time. It is from “La Louisiane” that we get the state name “Louisiana”.

Mint marks are inscribed on coins to indicate where the coin was minted. In the US, the current mint marks are:

A spinet is the name given to a smaller version of keyboard instruments, such as the harpsichord, piano or organ. Spinets are still made today, as smaller and cheaper versions of full-size instruments.

To pull a muscle again is to reinjure said muscle.

A xerox is a copy made on a xerograph machine. Xerography is a dry photocopying technique that was invented in 1938 by Chester Carlson, although he originally referred to the process as electrophotography. Joseph Wilson commercialized Carlson’s process some years later, coining the term “Xerography” using the Greek words for “dry” and “writing”. Wilson changed the name of his own photographic company to Xerox.

Quiznos is one the finer fast food joints, in my humble opinion. The main meal served is a toasted submarine sandwich.

A schuss is a very fast run downhill in skiing, with no turns taken to slow the pace of the descent. “Schuss” is a German word for “shot”.

Mott the Hoople was a glam rock band from England that was big in the mid-seventies. The name of the band comes from the title of a novel by Willard Manus.

1. The punch in Planter’s Punch : ETHANOL

49. Company whose name appears in an odometer in its logo : CARFAX

2. Dessert with a kick : TIRAMISU

33. Ride cost before taxes and such : BASE FARE