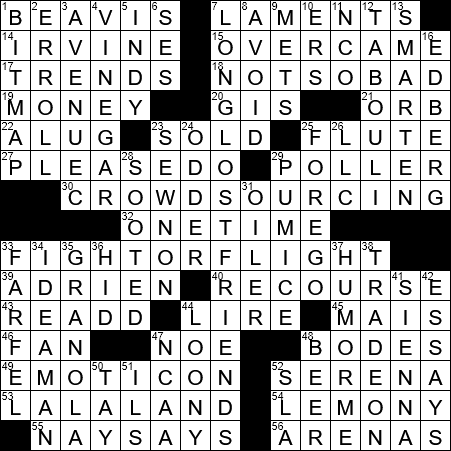 “Beavis and Butt-Head” is an adult cartoon television show and film. The show ran on MTV, which is only one reason that I don’t watch it …

The California city of Irvine is a planned city that was incorporated in 1971. The Irvine Company started developing the area after it sold land to the University of California in 1959 that was used for what is now the school’s Irvine campus.

A flute is a woodwind instrument that doesn’t have a reed. Instead, sound is produced by blowing air across an opening. A flute player is often referred to as a flautist. Flutes have been around a long, long time. Primitive flutes found in modern-day Germany date back 43,000 to 35,000 years, which makes the flute the oldest known musical instrument.

30. Wikipedia is an example of it : CROWDSOURCING

Crowdsourcing is mainly an online phenomenon, and is the solicitation of perhaps services, ideas or content from a large group of people. “Crowdsourcing” is a portmanteau of “crowd” and “outsourcing”. An example of crowdsourcing is crowdfunding, where an individual solicits many small contributions from a large number of people to fund a project.

39. Brody who was the youngest Best Actor Oscar winner : ADRIEN

Adrien Brody won an Oscar for Best Actor for his performance in the Roman Polanski masterpiece “The Piano”. Brody won the award in 2003 at the age of 29, making him the youngest person ever to receive the Best Actor Oscar.

“Mais oui!” translates from French as “But yes!”

Noe Valley is a neighborhood in San Francisco. The area is named after José de Jesús Noé who was the last Mexican mayor of Yerba Buena, which is what San Francisco was called when it was part of Mexico.

An emoticon is a glyph created using text characters to represent facial features, and usually oriented sideways. The emoticon is designed to indicate emotion or attitude. The classic example is the smiley face ?

A bitmap is an image file format used to store digital images. Basically, each pixel in a bitmap file is stored as a “bit” of information, hence the name “bitmap”.

Erroll Garner was a jazz pianist and composer. Garner’s most famous composition by far is 1954’s “Misty”, which is now a jazz standard.

Avenues A, B, C and D are the only avenues in Manhattan to have single letter names. The area bounded by Avenues A and D, 14th Street and Houston Street in the East Village is known as Alphabet City, a reference to those single-letter avenues. The “Alphabet City” moniker emerged in the 1980s.

9. Last team to play in the Polo Grounds : METS

Tabouleh (also “tabouli”) is one my my favorite dishes. It is usually made from bulgur, tomato, cucumber, parsley, mint, onion, garlic, olive oil and lemon juice. Just writing that list of ingredients gets my mouth watering …

Bulgur is a cereal made from the groats (hulled kernels) of wheat, usually durum wheat.

Stefan Edberg is a Swedish tennis player, and former world number one. Sadly, one part of Edberg’s legacy is his involvement in a freak accident at the 1983 US Open. A ball struck by Edberg hit one of the linesmen causing him to topple off his chair, fracturing his skull as he hit the ground. That injury was fatal.

Pumice is volcanic rock that is formed by lava cooling. There are bubbles in pumice due to water and carbon dioxide frothing out of the lava as it cools. Because of the frothy structure, pumice is relatively light and is a great thermal insulator. As such, it is used in construction to make insulating breeze blocks.

The Houston Oilers were an AFL charter team, founded in 1960. The team moved to Tennessee in 1997, and became the Tennessee Titans in 1999.

44. More than a little foolish : LOONY

Something described as “loony” is insane, crazy. “Loony” is short for “lunatic”, an adjective that is now considered offensive. The term arose in the late 1400s when it meant “affected with periodic insanity”, insanity attacks brought on by the cycles of the moon. “Lunatic” comes from the Latin “luna” meaning “moon”.

The Firth of Tay is an inlet on the east coast of Scotland, into which empties Scotland’s largest river, the Tay. The city of Dundee lies on the Firth, and the city of Perth a little further inland on the Tay.

30. Wikipedia is an example of it : CROWDSOURCING

33. Kind of response to mortal danger : FIGHT OR FLIGHT

39. Brody who was the youngest Best Actor Oscar winner : ADRIEN

9. Last team to play in the Polo Grounds : METS

44. More than a little foolish : LOONY