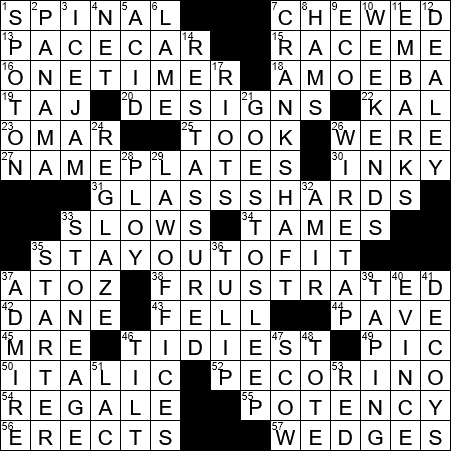 16. Immediate slap shot after receiving a pass, in hockey : ONE-TIMER

The Parsons School of Design is a private school in New York’s Greenwich Village. Parsons was established in 1896 by artist William Merritt Chase as the Chase School, and was renamed two years later to the New York School of Art. Frank Alvah Parsons joined the school as a teacher in 1904, and soon after became president. His contributions to the school’s success was recognized in 1936 when it was renamed again, to the Parsons School of Design.

An encyclopedia is a compendium reference work containing summary information about a branch of knowledge, or about all knowledge. The word “encyclopedia” comes from the Greek “enkyklios paideia” meaning “general education”, or literally “general rearing of a child”.

Dane Cook is a stand-up comedian who has had a number of roles in movies as well. He had a setback handling the income he was earning from his work though back in 2008. His half-brother had been his business manager up to that point and it was discovered that he had embezzled millions of dollars from Dane. The half-brother and his wife are now in prison for the crime.

52. Cheese from the Italian for “sheep” : PECORINO

The nation that we now know as Panama sits on an isthmus that formed about 3 million years ago. The isthmus was the result of a land bridge forming between North and South America as two tectonic plates of the Earth’s crust slowly collided. Man first attempted to create a waterway across the Isthmus of Panama in 1881, but the 48-mile long Panama Canal only opened for business in 1914.

Dealey Plaza is a square in downtown Dallas that was the location of the assassination of President John F. Kennedy in 1963. The plaza is mainly a city park, one that was completed in 1940 as a project funded by the WPA. The name honors George Bannerman Dealey, publisher of “The Dallas Morning News”.

Tulip festivals are held in a few cities around the world. The largest of these is the Canadian Tulip Festival that is held every year in the capital city of Ottawa. The tradition of growing tulips in Ottawa really started at the end of WWII. The Dutch royal family presented the city with 100,000 tulip bulbs as an act of thank for having sheltered Princess Juliana and her children while the Nazis occupied the Netherlands. The first Canadian Tulip Festival took place in 1953.

Anita Brookner is a British novelist and art historian. Brookner’s fourth book was “Hotel du Lac”, which was published in 1984 and won that year’s Booker Prize.