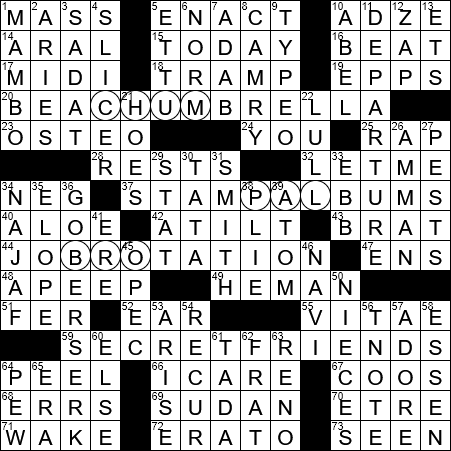 Each of today’s themed answers includes a hidden (SECRET) word that is a synonym of “FRIEND”:

Al Roker is best known as the weather anchor on the “Today” show on NBC. He has successfully branched out from that platform though, and even co-wrote a novel called “The Morning Show Murders”, about a celebrity chef and TV host who get entangled in mystery. Topical stuff …

A chum is a friend. The term originated in the late 1600s as an alternative spelling for “cham”. In turn “cham” was a shortened form of “chambermate”, a roommate at university.

In linguistics, the concept of grammatical person defines sets of personal pronouns. In English, first-person pronouns include the speaker. The second person is the person(s) to whom the first person is speaking. The third person is used for everyone else.

A man described as macho shows pride in his masculinity. “Macho” is a Spanish word for “male animal”.

The verb “to be” translates into German as “sein”, and into French as “être”.

An Englishman might say “ta-ta” or “cheerio” instead of “goodbye”. Well, supposedly so …

Smith College is a private women’s school in Northampton, Massachusetts. Smith was founded in 1870 using funds bequeathed by Sophia Smith, who inherited her fortune from her wealthy farmer father.

Najaf is an Iraqi city that lies about 100 miles south of Baghdad. It is home to the Imam Ali Mosque, which is an important holy site for Shia Muslims. According to the Shia tradition, the mosque is the burial site of Ali, the first Imam and cousin of Muhammad. Also according to Shia tradition, the remains of Adam and Noah are buried alongside Ali.

Our word “berserk”, meaning “deranged”, comes from the “Berserkers”, Norse warriors described in Old Norse literature. Berserkers were renowned for going into battle in a fury, and some believe that they consumed drugged food to get themselves worked up for the fighting ahead.

The Organization of the Petroleum Exporting Countries (OPEC) was founded in 1960 at a conference held in Baghdad, Iraq that was attended by Iraq, Kuwait, Iran, Saudi Arabia and Venezuela. Nine more countries joined the alliance soon after, and OPEC set up headquarters in Geneva, Switzerland and then Vienna, Austria in 1965. The basic aim of OPEC was to wrench control of oil prices from the oil companies and to put it in the hands of the sovereign states that own the natural resource.