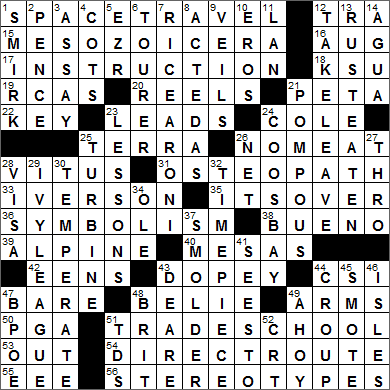 Today’s Wiki-est, Amazonian Googlies
Across
1. Verne vision SPACE TRAVEL
Jules Verne really was a groundbreaking author. Verne pioneered the science fiction genre, writing about space, air and underwater travel, long before they were practical and proved feasible. Verne is the second most translated author of all time, with only Agatha Christie beating him out.

15. Jurassic time MESOZOIC ERA
The Mesozoic Era is also known as the Age of the Dinosaurs, as most dinosaurs developed during that time and the era ended with the extinction of all dinosaurs (except the avian species, which developed into our modern birds). The Mesozoic Era started with another cataclysmic event, the so called “Great Dying”, the largest mass extinction in the history of our planet. During the “Great Dying” over 90% of all marine species and 70% of all terrestrial vertebrate species died off.

16. What “8” may mean: Abbr. AUG
Gaius Octavius Thurinus (often called Octavian) was the adopted son of Gaius Julius Caesar. After Julius Caesar was assassinated, Octavian came to power in Rome and teamed up with Mark Antony and Marcus Aemilius Lepidus in what was called the Second Triumvirate. When the triumvirate fell apart, especially after Antony’s defeat at Actium, Octavian became more powerful within the Roman Republic. Several years later he wrested sufficient power from the Roman Senate to end the Republic and begin the Roman Empire. As the first Emperor of Rome, Octavian was given the name Caesar Augustus. The month of August, originally called “Sextilis” in Latin, was renamed in honor of Augustus.

19. Spectra 70 computers RCAS
The Spectra 70 was a mainframe computer made by RCA’s computer division starting 1965. Those were the days when input to the computer was mainly carried out using card punches.

21. Org. with a rabbit in its logo PETA
People for the Ethical Treatment of Animals (PETA) is a very large animal rights organization, with 300 employees and two million members and supporters worldwide. Although the group campaigns for animal rights across a broad spectrum of issues, it has a stated focus in opposition of four practices:

24. Phillies pitcher Hamels COLE
Cole Hamels is a starting pitcher for the Philadelphia Phillies. Hamels is married to Heidi Strobel who was a contestant on the sixth series of the reality television show “Survivor”.

31. DO holder OSTEOPATH
Doctor of Osteopathic Medicine (DO)

33. 1996-’97 NBA Rookie of the Year IVERSON
Allen Iverson is a professional basketball player who played in the NBA for several years. Iverson signed up to play for a Turkish basketball team in 2010. He played in Turkey for two seasons and retired from the game in 2013.

38. It’s good in Puerto Rico BUENO
Puerto Rico is located in the northeastern Caribbean (in the Atlantic Ocean), east of the Dominican Republic. The name “Puerto Rico” is Spanish for “rich port”. The locals often call their island Borinquen, the Spanish form of “Boriken”, the original name used by the natives.

40. Monument Valley scenery MESAS
The spectacular Monument Valley, with it’s magnificent sandstone buttes and mesas, lies within the bounds of the Navajo Nation Reservation near the Four Corners region in the Southwest. The valley has served as a spectacular backdrop in many Hollywood movies. I always remember it as the location where Forrest Gump decided to stop running back and forth across the country.

43. Speechless miner of fiction DOPEY
In the original Brothers Grimm fairy tale called “Snow White”, the seven dwarfs were not given any names. The names were added for the 1937 classic Disney film “Snow White and the Seven Dwarfs”. The seven dwarfs are:

44. TV debut of 2000 CSI
“CSI: Crime Scene Investigation” was the most-watched show in the world for five years, the most recent being 2012. “CSI” is finally winding down, and is scheduled to finish with a two-hour TV movie that will feature members of the original cast.

48. Confute BELIE
The verbs “to confute” and “to belie” both mean “to show to be false”.

50. Links letters PGA
The Professional Golfers’ Association (PGA) was founded in 1916 and today has its headquarters (unsurprisingly) in Florida, where so many golfers live. Back in 1916, the PGA was based in New York City.

Down
1. Unsportsmanlike look SMIRK
The Old English word “smearcian” means “to smile”, and gave us our verb “to smirk”, meaning “to smile in a self-satisfied manner”.

2. Overseas coppers PENCE
I grew up with shillings and pence in Ireland, until they were replaced with decimal currency in 1971. There used to be twelve pence in a shilling, and twenty shillings in a pound. When the conversion was made on “Decimal Day”, the shilling disappeared and the penny was replaced by what was then called the “new penny”. One shilling was pegged at five new pence. We use the euro in Ireland now, but pounds and pence are still used in the UK.

5. Book before Neh. EZR
In the Hebrew Bible, the Book of Ezra was originally combined with the Book of Nehemiah, with the two being separated in the early days of the Christian Era.

7. Golden Grain Company creation RICE-A-RONI
Rice-a-Roni was introduced in 1958 by the Golden Grain Macaroni Company of San Francisco. The company was run by an Italian immigrant and his four sons. The wife of one of the sons served a pilaf dish at a family diner that was a big hit, so her brother-in-law created a commercial version by blending dry chicken soup mix with rice and macaroni. Sounds like “a San Francisco treat” to me …

10. Psyche’s beloved EROS
In the myth of Cupid (aka Eros) and Psyche, the two title characters must overcome many obstacles to fulfill their love for each other. Overcome them they do, and the pair marry and enjoy immortal love.

11. Data-sharing syst. LAN
You may have a Local Area Network (LAN) in your house. If you’ve got a PC and a router or switch, likely attached to some modem, then you have a LAN.

24. Oregon Coast Music Festival setting COOS BAY
Coos Bay is the largest city on the Oregon Coast. Coos Bay was founded as Marshfield in 1853, named for the Massachusetts hometown of the founder. Residents voted to change the name in 1944 to that of the bay on which the city stands.

25. Wind farm sight TURBINE
A turbine is a machine uses the flow of a fluid (sometimes air) to create rotational work. Simple examples of turbines are windmills and waterwheels.

27. “Comin’ __ the Rye” THRO’
“Comin’ Thro’ the Rye” was the first novel of Ellen Buckingham Mathews, written under the pen name Helen Mathers and published in 1875. Mathews was a popular English novelist in the late 1800s and early 1900s.

28. Dow 30 company VISA
Did you know that Visa doesn’t issue any credit cards? Visa just sells the electronic systems and infrastructure to banks who then put the Visa logo on their own cards so that both the customer and merchant know to use the VISA system when making a transaction.

29. Quakers play in it IVY LEAGUE
The University of Pennsylvania (Penn or UPenn) was founded in 1740 by by Benjamin Franklin. Penn was the first school in the country to offer both graduate and undergraduate courses. Penn’s sports teams are known as the Quakers, or sometimes “the Red & Blue”.

43. Mary __: ship in a Hammond Innes novel DEARE
Hammond Innes was an English author who mainly wrote thrillers, several of which have been made into films. The most famous of his novels is probably “The Wreck of the Mary Deare”, first published in 1956. It was made into a successful movie of the same name in 1959, starring Gary Cooper and Charlton Heston.

44. Laryngeal concern CROUP
The respiratory condition known as “croup” results in a characteristic cough that produces a “barking” sound. The condition is usually caused by the viral infection in the upper airway.

45. Clobbered SMOTE
“To smite” is to strike with a firm blow.

46. Key chain ISLES
A “key” (also “cay”) is a low island offshore, as in the Florida Keys. Our term in English comes from the Spanish “cayo” meaning “shoal, reef”.

47. Letters seen under antlers BPOE
The Benevolent and Protective Order of Elks (BPOE) was founded in 1868, and is a social club that has about a million members today. It started out as a group of men getting together in a “club” in order to get around the legal opening hours of taverns in New York City. The club took on a new role as it started to look out for poor families of members who passed away. The club now accepts African Americans as members (since the seventies) and women (since the nineties), but atheists still aren’t welcome.

48. One in a lift, maybe BRIT
On the other side of the Atlantic, an elevator is called a “lift”.

49. Main call AHOY!
“Ahoy!” is a nautical term used to signal a vessel. When the telephone was invented by Alexander Graham Bell, he suggested that “ahoy” be used as a standard greeting when answering a call. However, Thomas Edison came up with “hello”, and we’ve been using that ever since.

When one thinks of the word “main” in the context of the sea, the Spanish Main usually comes to mind. Indeed, the use of the more general term “main”, meaning the sea, originates from the more specific “Spanish Main”. “Spanish Main” originally referred to land and not water, as it was the name given to the mainland coast around the Caribbean Sea in the days of Spanish domination of the region.