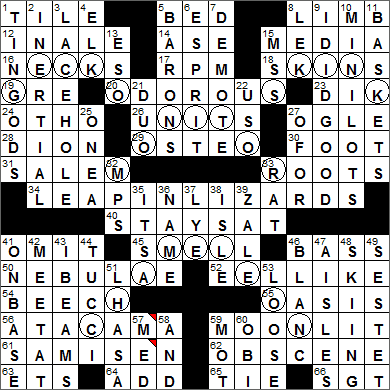 CROSSWORD SETTER: Jeffrey Wechsler
THEME: Leapin’ Lizards! … today’s grid features four sets of circled letters, with each spelling out a type of LIZARD. And, the arrangement of the letters hints at them LEAPING into the air. The four LIZARDS are:

34A. Classic comics catchphrase … and a hint to four sets of puzzle circles LEAPIN’ LIZARDS!

Today’s Wiki-est, Amazonian Googlies
Across
5. Place for oysters BED
Pearls form in oysters because of a reaction that is similar to an immune system response in higher animals. The pearl is formed as the oysters lays down successive layers of calcium carbonate around some microscopic foreign body that has penetrated the shell.

12. Beef __: dish sometimes made with Guinness IN ALE
Guinness is the most popular beer sold in Ireland. The beer is a stout and has that famous creamy white head, a result of mixing the beer with nitrogen as it is poured. You can also buy Guinness that has no nitrogen, which is sold in bottles bearing the the name Guinness Export. This carbonated version of the beer has a very different taste, and is my personal favorite …

14. Enzyme suffix -ASE
Enzymes are basically catalysts, chemicals that act to increase the rate of a particular chemical reaction. For example, starches will break down into sugars over time, especially under the right conditions. However, in the presence of the enzyme amylase (found in saliva) this production of sugar happens very, very quickly.

18. Hides SKINS
Both the verb “to hide” and the noun “hide”, meaning “skin”, derive from the Old English “hyd” meaning “skin”. The idea is that “to hide” something is similar to covering it with a skin.

19. Higher ed challenge GRE
Passing the Graduate Record Examination (GRE) is usually a requirement for entry into graduate school here in the US.

23. Hägar creator Browne DIK
“Hagar the Horrible” is a comic strip that was created by the late Dik Browne and is now drawn by his son, Chris Browne. “Hagar the Terrible” (not “Horrible”) was the nickname given to Dik by his sons. Hage of the comic strip lives with his wife Hagar Horrible, their children Hamlet and Honi, and their dog Snert.

24. Emperor before Vitellius OTHO
Otho was Emperor of Rome for only three months, before he committed suicide. It is thought that Otho killed himself as a gesture intended to avoid a civil war.

Vitellius was the Emperor of Rome for only eight months, in the year 69 CE, which was known as the Year of the Four Emperors. Otho succeeded Galba and Otho, both of whom only ruled for a matter of months. Vitellius’s claim to the throne was disputed, which led to civil war after which Vitellius abdicated to allow Vespasian to become emperor. Abdication was not enough for Vespasian’s soldiers, who executed Vitellius anyway.

28. “Runaround Sue” singer DION
The singer and songwriter Dion DiMucci went by the stage name of just “Dion”. Dion’s most successful year was 1961, when he released his big hits “Runaround Sue” and “The Wanderer”.

29. Path lead-in OSTEO-
The healthcare discipline known as osteopathy was founded in 1892 by an American physician who opened up the first school of osteopathy in 1892 in Kirksville, Missouri. Osteopaths emphasise the role played by the musculoskeletal system in health and disease.

31. Setting for a Tony-winning Miller play SALEM
“The Crucible” is a 1952 play by Arthur Miller that tells the story of the Salem witch trials. Miller wrote it as an allegory for the House Committee on Un-American Activities hearings that were being chaired by Senator Joe McCarthy around that time. Miller was called before the Committee himself, and was convicted of contempt of Congress for refusing to “name names”.

46. What Barry White often sings? BASS
Barry White was a singer-songwriter from Texas who grew up in South Central Los Angeles. White has a rough start to life and ended up in jail at 17 for stealing Cadillac tires. It was while in prison that White was inspired to begin a musical career, after listening Elvis Presley on record singing “It’s Now or Never”. White’s greatest chart success was in the mid-seventies, with recordings such as “Never, Never Gonna Give Ya Up” and “You’re the First, the Last, My Everything”.

50. Cosmic clouds NEBULAE
In astronomical terms a nebula is a cloud of dust and ionized gases (“nebula” is the Latin for “cloud”). Many nebulae form as gases collapse in on themselves under the influence of enormous gravitational forces. Ultimately these collapses can result in the creation of new stars.

54. Fireplace wood BEECH
Beech wood is prized as firewood as it burns for many hours with a bright flame and is easily split.

56. South American desert ATACAMA
Even deserts get rain at some point in the year, with very few exceptions. One of those exceptions is the Atacama Desert in South America, which receives no rain at all.

Down
1. Self-important authoritarians TIN GODS
A “tin god” is a person who claims authority and is full of self-importance. The use of “tin” is apt as it is a base metal with relatively little value.

3. Wingtip feature LACE HOLE
A brogue is more commonly called a wingtip here in the US, I think. The shoe design originated in Ireland and Scotland, and “brog” the Irish word (and similar Scottish word) for shoe gives rise to the name. The brogue/wingtip design includes decorative perforations in the leather uppers. The toe cap of a brogue curves back in a shape that suggest the tip of a bird’s wing, hence the alternative name.

4. Rockies grazer ELK
The elk (also known as the wapiti) is the one of the largest species of deer in the world, with only the moose being bigger. Early European settlers were familiar with the smaller red deer back in their homelands, so when they saw the “huge” wapiti they assumed it was a moose, and incorrectly gave it the European name for a moose, namely “elk”. The more correct name for the beast is “wapiti”, which means “white rump” in Shawnee. It’s all very confusing …

5. Some nobility BARONS
In Britain, there are five ranks of peer, namely duke, marquess, earl, viscount and baron, in descending order.

6. Lively wit ESPRIT
Our word “esprit”, meaning “liveliness of mind”, comes to us from Latin via French. The Latin “spiritus” means “spirit.

8. Albanian coin LEK
The official currency of Albania is called the lek. The first lek was introduced in 1926, and was apparently named after Alexander the Great.

11. Navajo craftwork products BASKETS
There are more speakers of the Navajo (also “Navaho”) language than any other Native American language north of the US-Mexico border. Famously, the Navajo language was used by the “code talkers” in the Pacific Theater during WWII to send secure communications by radio. These Navajo “coded” messages were used in fast tactical communications, with one bilingual Navajo speaker talking over the radio to another speaker, and the two acting as translators at either end of the conversation. The Navajo code was never broken by the Japanese.

13. That, in Madrid ESO
Madrid is the largest city in Spain and the capital. Madrid is located very close to the geographical center of the country. It is the third-largest city in the European Union (after London and Paris). People from Madrid called themselves Madrileños.

21. Laurel and Hardy, e.g. DUO
Stan Laurel was an English comic actor (born Arthur Stanley Jefferson), who made a great career for himself in Hollywood. Laurel ended up at the Hal Roach studio directing films, intent on pursuing a career in writing and directing. However, he was a sometime actor and was asked to step in when another comic actor, Oliver Hardy, was injured and couldn’t perform. Laurel and Hardy started to share a stage together during that time and when it was clear they worked so well together, their partnership was born. Oh, and the oft-quoted story that Clint Eastwood is the son of Stan Laurel … that’s just an urban myth.

22. 1941 FDR creation USO
The United Service Organization (USO) was founded in 1941 at the request of President Franklin Delano Roosevelt (FDR) “to handle the on-leave recreation of the men in the armed forces”. A USO tour is undertaken by a troupe of entertainers, many of whom are big-name celebrities. A USO tour usually includes troop locations in combat zones.

25. Selective Service status ONE-A
The US government maintains information on all males who are potentially subject to military conscription, using what is called the Selective Service System(SS). In the event that a draft was held, men registered would be classified into groups to determine eligibility for service. Class 1-A registrants are those available for unrestricted military service. Other classes are 1-A-O (conscientious objector available for noncombatant service), 4-A (registrant who has completed military service) and 4-D (Minister of religion).

The US Marine Corps (USMC) is the smallest of the four branches in the US Department of Defense (DOD).

37. Corrosive material LYE
What we call “lye” is usually sodium hydroxide, although historically the term was used for potassium hydroxide. Lye has many uses, including to cure several foodstuffs. Lye can make olives less bitter, for example. The chemical is also found in canned mandarin oranges, pretzels and Japanese ramen noodles. More concentrated grades of lye are used to clear drains and clean ovens. Scary …

38. Key ISLE
A “key” (also “cay”) is a low island offshore, as in the Florida Keys. Our term in English comes from the Spanish “cayo” meaning “shoal, reef”.

39. Big name in jewelry ZALE
The first Zales jewelry store was opened by Morris and William Zale and Ben Lipshy in Wichita Falls, Texas, in 1924. Zales became successful largely by offering credit to their customers, a revolutionary concept at the time.

44. Stanley who plays Flickerman in “The Hunger Games” TUCCI
Stanley Tucci is a favorite actor of mine. Of his many fine performances, I really liked him in 2009’s “Julie & Julia” in which he plays the husband of celebrity chef Julia Child. Tucci is quite the cook himself in real life and released “The Tucci Cookbook” in 2012. He is also a co-owner of the Finch Tavern restaurant in Croton Falls, New York.

“The Hunger Games” is a 2008 novel by Suzanne Collins, the first in a trilogy of titles that also includes “Catching Fire” (2009) and “Mockingjay” (2010). “The Hunger Games” was adapted into a very successful movie released in 2012, with the sequels following soon after.

46. Sommelière’s suggestion BLANC
“Sommelier” is the French word for a wine steward. If that steward(ess) is a female, then the French term is “sommelière”.

49. Sonnet part SESTET
A sestet is a group of six lines of poetry similar to a quatrain, a group of four lines.

57. Rx spec MED
There seems to some uncertainty about the origin of the symbol “Rx” that’s used for a medical prescription. One explanation is that it comes from the astrological sign for Jupiter, a symbol put on prescriptions in days of old to invoke Jupiter’s blessing to help a patient recover.

60. Geisha’s band OBI
The sash worn as part of traditional Japanese dress is known as an obi. The obi can be tied in what is called a butterfly knot.