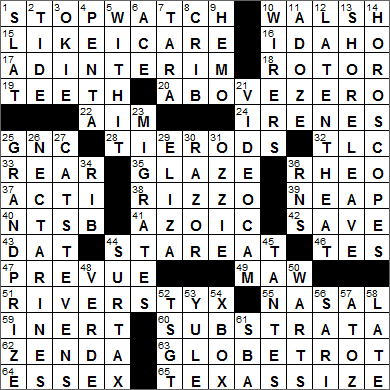 Today’s Wiki-est, Amazonian Googlies
Across
1. “60 Minutes” symbol STOPWATCH
The marvelous news magazine program “60 Minutes” has been on the air since 1968. The show is unique among all other regularly-scheduled shows in that it has never used theme music. There is just the ticking of that Aristo stopwatch.

17. For the time being AD INTERIM
We use the Latin phrase “ad interim” to mean “temporarily”. A literal translation would be “in the time between”.

24. Castle and others IRENES
Vernon and Irene Castle were a husband-wife team of ballroom dancers who regularly performed on Broadway at the start of the 20th century. The Castles have been credited with creating or at least popularizing the dance called the “foxtrot”.

25. “Live Well” retail chain GNC
General Nutrition Centers (GNC) is a retailer of health and nutrition supplements based in Pittsburgh, Pennsylvania. The company was founded in 1935 as a small health food store in downtown Pittsburgh. There are now about 5,000 stores in the US. The GNC slogan is “Live Well”.

28. Steering system parts TIE RODS
Tie rods are part of a rack-and-pinion steering mechanism in a car. On the other side of the Atlantic they are referred to as “track rods”.

A rheostat is an electrical device that can offer a varying degree of resistance to current flow. The English physicist Sir Charles Wheatstone first coined the term, using the Greek “rheos” meaning “flowing stream” and “stat” meaning “regulating device”.

37. When Tony sings “Maria” ACT I
Leonard Bernstein’s musical “West Side Story” is of course based on William Shakespeare’s “Romeo and Juliet”. The musical is set in New York City and features two rival gangs: the Sharks from Puerto Rico and the Jets with working-class, Caucasian roots. Tony from the Jets falls in love with Maria from the Sharks. All this parallels Romeo from the House of Montague falling for Juliet from the House of Capulet in the Italian city of Verona.

38. Muppet rat named for a movie character RIZZO
The Muppet Rizzo the Rat is named for Ratso Rizzo, a character in the movie “Midnight Cowboy” played by Dustin Hoffman.

The 1969 movie “Midnight Cowboy” is a Hollywood adaptation of a novel of the same name by James Leo Herlihy. It’s a pretty depressing story about a young Texan (played by Jon Voight) who heads to New York City to make money as a hustler, hiring himself out to women for sex. Pretty soon the young man ends up selling his body for sex with males as well. Prior to release the MPAA gave the movie an R-rating, but the United Artists studio took advice and decided to release it with an X-rating. When “Midnight Cowboy” won the Best Picture Academy Award in 1969, it became the only X-rated film to be so honored.

40. It investigates RR accidents NTSB
The National Transportation Safety Board is responsible for the investigation of major accidents involving transportation. Included in this broad definition is the transportation of fluids in pipelines. The organization is independent in that it has no ties to other government agencies or departments so that its investigations can be viewed as “impartial”. The NTSB also earns a little money for the US as it hires out its investigation teams to countries who don’t have the necessary resources available on their own soil.

41. __ Era: old name for Earth’s pre-life period AZOIC
From about 1850 to 1950, the term “Azoic” was used to describe rocks that had formed before the appearance of life. Prior to 1850, the Azoic Era was referred to as the Primitive Era. In the fifties, the term “Azoic” was largely dropped as fossils were found in Azoic rocks, indicating that life existed further back in time than was originally believed.

43. Who __ Nation: New Orleans Saints fans DAT
The entire community of fans of the New Orlean Saints are sometimes referred to as the “Who Dat Nation”. The name comes from a popular chant heard at a Saints game:

46. French possessive TES
“Tes” is the French word for “your”, when referring to a group of items and when talking to someone with whom you are familiar.

47. It became the TV Guide Channel in 1999 PREVUE
The cable TV channel that we know today as Pop, was originally launched in 1981 as the Electronic Program Guide, would you believe? It was a channel that listed “what’s on TV”. The Electronic Program Guide was upgraded to Prevue Guide in 1988, and then the Prevue Channel in 1993, still provided basically the same thing, a guide to what’s on television. It was renamed to the TV Guide Channel in 1999, and the TV Guide Network in 2007, and TVGN in 2013. By the time the channel became “Pop” in 2014, it was broadcasting mainly programming, with the focus being on pop culture.

51. Mythological boundary RIVER STYX
The River Styx of Greek mythology was the river that formed the boundary between the Earth and the Underworld (or “Hades”). The souls of the newly dead had to cross the River Styx in a ferry boat piloted by Charon. Traditionally, a coin would be placed in the mouths of the dead “to pay the ferryman”.

62. Where Rudolf of Ruritania was imprisoned ZENDA
The 1937 film “The Prisoner of Zenda” is based on a novel of the same name written by Anthony Hope and first published in 1894. Apparently the movie was a difficult shoot for director John Cromwell. He had trouble with Ronald Colman who really didn’t know his lines well, and co-stars Douglas Fairbanks Jr. and David Niven were always out on the town and turning up for work “under the weather”.

64. Lake Placid’s county ESSEX
The beautiful Lake Placid in the Adirondack Mountains of New York State borders the village of Lake Placid, which famously was host of the 1932 and 1980 Winter Olympics. Here in the US, the most memorable event of the 1980 Winter Games was the “Miracle on Ice”, in which an amateur US hockey team beat the very professional USSR team in a semi-final matchup, and went on to win gold. A lesser known fact from the 1980 Games is that the Lake Placid Middle/High School served as a private bar for the Olympics. It is the only high school in the US to have been issued a license to serve alcohol.

Down
3. Dust Bowl victim OKIE
“Okies” was a derogatory term used during the Dust Bowl of the 1930s for farming families who migrated from Oklahoma (hence the name), Arkansas, Kansas and Texas in search of agricultural jobs in California. The road used by many of these migrant families was Route 66, which is also called “Mother Road”.

The Dust Bowl was the name given to a period in which severe dust storms ravaged the American and Canadian Prairies in the thirties. A major factor in the storms was the loss of the deep-rooted grasses native to the land that had been displaced by intensive farming. Without the grasses, the topsoil was blown away in a period of drought.

4. Gram lead-in PENTA-
A pentagram is a star-shape with five points that has been drawn using five straight lines. The name “pentagram” comes from the Greek for “five line”. The shape is sometimes also called a “pentacle”, “pentalpha” or “pentangle”. The pentagram is used as a prominent symbol in several religions and movements, notably in modern occultism.

7. Johnny’s partner in the 2014 Olympic figure skating telecasts TARA
Johnny Weir is a figure skater from Pennsylvania who was US national champion for three consecutive years starting in 2004.

12. Thermodynamics topic LATENT HEAT
When heat is added to a material, its temperature increases. However, when that material makes a change of phase, say from a solid to a liquid (like ice melting), a specific amount of added heat fails to cause a raise of temperature. That amount of heat is known as “latent heat”.

14. Charts featuring houses HOROSCOPES
The astrological chart known as a horoscope is usually divided into twelve “houses”. Those house have related star signs. For example, the House of Self (Vita) is related to the star sign Aries. The House of Value (Lucrum” is related to Taurus.

26. Peach mutations NECTARINES
A nectarine is a cultivar of a peach, notable for its smooth skin (as opposed to the fuzzy skin of the traditional peach).

27. “Moonshadow” singer CAT STEVENS
The singer-songwriter that I mainly know as Cat Stevens has been through a few names in his life. He was born in London as Steven Georgiou and adopted the stage name “Steve Adams” in the mid-sixties. A year later he changed his stage name to “Cat Stevens”, with which he had most of success. During this time he had hits with classic songs like “Wild World”, “Moonshadow” and “Morning Has Broken”. He also wrote the song “The First Cut Is the Deepest”, which became a hit for four different artists. In 1977, Stevens converted to Islam and took the name Yusuf Islam in 1978.

The actress and singer Julie Andrews was made a Dame in 2000 by Queen Elizabeth II. The most famous roles played by Andrews on the big screen were probably the leads in “Mary Poppins” (1964) and “The Sound of Music” (1965). More recently she has had a recurring role in “The Princess Diaries” (2001) and the film’s 2004 sequel. A favorite Julie Andrews film of mine is an comedy drama set in WWII called “The Americanization of Emily”, released in 1964.

31. Former White Sox manager Guillén OZZIE
Ozzie Guillén is a former professional baseball player and manager from Venezuela who spent most of his playing and coaching career with the Chicago White Sox. When the White Sox won the World Series in 2005, Guillén was the first Latino manager to achieve that feat.

36. ER workers RNS
Registered nurses (RNs) might be found in an operating room (OR) or emergency room (ER).

44. Unpopular Vietnam War-financing vehicle SURTAX
The Johnson administration imposed a surtax to offset the mounting cost of the Vietnam War. The surtax was essentially another 10% added to a taxpayer’s ordinary federal income tax liability.

45. Nice relatives TANTES
In French, an uncle (oncle) is married to an aunt (tante).

50. Partner of all? WARTS
I hope that you like this blog, warts and all …

53. Festive time YULE
“Yule” celebrations coincide with Christmas, and the words “Christmas” and “Yule” have become synonymous in much of the world. However, Yule was originally a pagan festival celebrated by Germanic peoples. The name “Yule” comes from the Old Norse word “jol” that was used to describe the festival.

54. Wii alternative XBOX
The XBox line of video game consoles is made by Microsoft. The original XBox platform was followed by XBox 360 and most recently by XBox One. Microsoft’s XBox competes directly with Sony’s PlayStation and Nintendo’s Wii.

The Wii is the biggest-selling game console in the world.

56. Indian wrap SARI
The item of clothing called a “sari” (also “saree”) is a strip of cloth, as one might imagine, unusual perhaps in that it is unstitched along the whole of its length. The strip of cloth can range from four to nine meters long (that’s a lot of material!). The sari is usually wrapped around the waist, then draped over the shoulder leaving the midriff bare. I must say, it can be a beautiful item of clothing.

61. Entrepreneur-aiding org. SBA
The Small Business Administration (SBA) is a government agency with the mission of assisting small businesses. The SBA doesn’t give loans itself, but it does act as a guarantor under the right circumstances. The SBA was set up in 1953, and isn’t a favorite with fiscal conservatives.