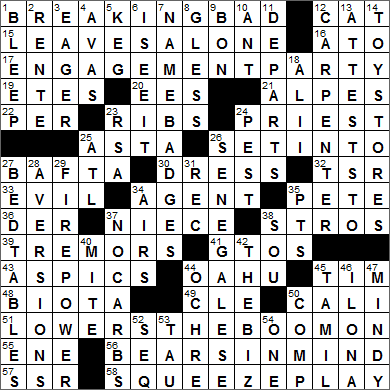 Today’s Wiki-est, Amazonian Googlies
Across
1. Show that won 16 Primetime Emmys BREAKING BAD
“Breaking Bad” is a crime drama series that originally aired on AMC from 2008 to 2013. The show was created by Vince Gilligan who had spent many years as producer and writer of “The X-Files”. There is a “Breaking Bad” spin-off show running on AMC called “Better Call Saul” that focuses on the life of lawyer Saul Goodman. I hear that it’s pretty good …

12. Sno-__ CAT
The brand name Sno-Cat is owned by the Tucker company. All “snowcats” are tracked vehicles built to work in snow, famously used in expeditions to the polar regions. The modern Sno-Cat from Tucker differs from its competitors in that it has four, independently-mounted tracks.

19. “Vous __ ici” ETES
“Vous êtes ici” are important words to know when navigating your way around Paris. They mean “You are here”, and you’ll often see them on maps in the street.

21. French department __-Maritimes ALPES
Alpes-Maritimes is a department in the very southeast of France on the Mediterranean Sea. Alpes-Maritimes also borders Monaco and Italy. The area’s economy is heavily dependant on tourism, particularly in the city of Nice.

24. Mass figure PRIEST
The principal act of worship in the Roman Catholic tradition is the Mass. The term “Mass” comes from the Late Latin word “missa” meaning “dismissal”. This word is used at the end of the Latin Mass in “Ite, missa est” which translates literally as “Go, it is the dismissal”.

25. More familiar role for the portrayer of George in “Bringing Up Baby” ASTA
Asta is the wonderful little dog in the superb “The Thin Man” series of films starring William Powell and Myrna Loy (as Nick and Nora Charles). In the original story by Dashiell Hammett, Asta was a female Schnauzer, but on screen Asta was played by a wire-haired fox terrier called “Skippy”. Skippy was also the dog in “Bringing up Baby” with Cary Grant and Katharine Hepburn, the one who kept stealing the dinosaur bone. Skippy retired in 1939, so Asta was played by other dogs in the remainder of “The Thin Man” films.

27. AMPAS’ London counterpart BAFTA
The BAFTA awards are presented annually by the British Academy of Film and Television Arts (BAFTA). The BAFTAs are the UK equivalent of the US’s Oscar and Emmy awards, all rolled into one.

The Academy of Motion Picture Arts and Sciences (AMPAS) is the organization that gives the annual Academy Awards also known as the “Oscars”. The root of the name “Oscar” is hotly debated, but what is agreed is that the award was officially named “Oscar” in 1939. The first Academy Awards were presented at a brunch in 1929 with an audience of just 29 people. The Awards ceremony is a slightly bigger event these days …

34. Fed, say AGENT
A “fed” is an officer of a US federal agency, although the term usually applies to an agent of the Federal Bureau of Investigation.

35. Seahawks coach Carroll PETE
Pete Carroll is a former head coach for the New York Jets and the New England Patriots, and now has the same position with the Seattle Seahawks. Carroll is also a “Deadhead”, an avid fan of the Grateful Dead.

36. __ Bund: Swiss newspaper DER
“Der Bund” is a German-language newspaper published in Bern, Switzerland. The newspaper’s title translates in English as “The Union”.

38. A.L. West team, familiarly ‘STROS
The Houston baseball team changed its name to the Astros (sometimes “‘Stros”) from the Colt .45s in 1965 when they started playing in the Astrodome. The Astrodome was so called in recognition of the city’s long association with the US space program.

41. Classic muscle cars GTOS
The Pontiac GTO was was produced by GM from 1964 to 1974, and again by a GM subsidiary in Australia from 2004 to 2006. The original GTO’s design is credited to Pontiac chief engineer at the time John DeLorean, who later was found the DeLorean Motor Company.

43. Meat garnishes ASPICS
Aspic is a dish in which the main ingredients are served in a gelatin made from meat stock. “Aspic” is a French word for “jelly”.

44. Interstate H-1 locale OAHU
The westernmost and southernmost “interstate” highway in the US is the H-1 on the island of O’ahu.

48. Local life BIOTA
The biota of a region is the total collection of flora and fauna found there.

49. Airport near I-480, on itineraries CLE
Cleveland Hopkins International Airport (CLE) was founded in 1925. In 1930, Cleveland was home to the first air traffic control tower in the country, as well as the first airfield lighting system.

50. City SW of Bogotá CALI
In terms of population, Cali is the third largest city in Colombia (after Bogotá and Medellin). Santiago de Cali (the full name for the city) lies in western Colombia. Apparently, Cali is a destination for “medical tourists”. The city’s surgeons have a reputation for being expert in cosmetic surgery and so folks head there looking for a “cheap” nose job.

51. Lets have it LOWERS THE BOOM ON
“To lower the boom” is to deliver a knockout punch, or perhaps to punish. The phrase is nautical in origin, and is a reference to the spar that runs along the bottom of many sails, which is called a “boom”. Lowering that heavy boom on someone might inflict some damage.

55. Chemical suffix -ENE
An alkene is an organic compound made up of carbon and hydrogen atoms. It differs from an alkane in that it has at least one C=C double bond. The simplest alkene is the gas ethylene, a major raw material used in the manufacture of plastics (like polyethylene).

57. Georgia, once: Abbr. SSR
The former Soviet Socialist Republic (SSR) of Georgia is now an independent country. Supposedly, the Georgian people were given their name because they especially revered St. George. The flag of Georgia does indeed feature five St. George’s crosses.

58. Pressure tactic SQUEEZE PLAY
In baseball, a squeeze play is one in which a batter bunts the ball expecting to be thrown out at first, but gives a runner at third base a chance to score. In a safety squeeze the runner at third waits to see where the bunt is going before heading for home. In a suicide squeeze, the runner heads home as soon as the pitcher throws the ball.

Down
1. Censor BLEEP
The original “censor” was an officer in ancient Rome who had responsibility for taking the “census”, and for supervising public morality.

3. Beaverlike? EAGER
An “eager beaver” is a glutton for work. The phrase is army slang that dates back to WWII. I think the idea is that beavers are considered to be particularly industrious, as evidenced by the building of beaver dams.

4. Actress Gardner et al. AVAS
Ava Gardner is noted for her association with some big movies, but also for her association with some big names when it came to the men in her life. In the world of film, she appeared in the likes of “Mogambo” (1953), “On the Beach” (1959), “The Night of the Iguana” (1964) and “Earthquake” (1974). The men in her life included husbands Mickey Rooney, Artie Shaw and Frank Sinatra. After her marriages had failed (and perhaps before!) she had long-term relationships with Howard Hughes and bullfighter Luis Miguel Dominguin whom she met through her friend Ernest Hemingway.

“Burn Notice” is an action drama TV series that originally aired from 2007 to 2013 on the USA Network. The show’s title refer to “burn notices” issued by intelligence agencies, a document that discredits a source or agent that has become unreliable.

9. Early AC/DC frontman Scott BON
Bon Scott was the lead singer for the Australian hard rock band AC/DC. Despite his success on stage, Scott led a troubled life by all accounts. In his youth, he spent time in “juvy”, and an attempt to join the Australian Army was met with rejection as he was deemed to be “socially maladjusted”. Scott was found dead in 1980 in a Renault 5 car in London after a night of drinking. The cause of death was determined to be alcohol poisoning.

10. Worker in an Aesop tale ANT
In Aesop’s fable “The Ant and the Grasshopper”, the grasshopper spends the warm months singing and having a good time while the ant toils away storing food. When winter arrives, the grasshopper starts to die from hunger and begs the ant for food. The ant tells the grasshopper that he should have been more sensible instead of singing away all summer, and maybe he should dance through the winter!

23. Pretoria’s home: Abbr. RSA
Pretoria is the executive capital of the Republic of South Africa (RSA), one of three capital cities in the country. Cape Town is the legislative capital, and Bloemfontein is the judicial capital.

26. West African cuisine SENEGALESE
The Republic of Senegal is a country on the far western coast of Africa. For many years Senegal was a French colony, gaining independence in 1960. The capital of Senegal is Dakar, a city located on the Cap-Vert Peninsula that juts out into the Atlantic Ocean.

27. Stands where we lie BED TABLES
Bed tables are tables that extend over a bed (often seen in hospitals) or that rest on a bed (often used by kids bringing Mom breakfast in bed on Mother’s Day).

35. NBA tally PTS
Back in the mid-1600s, a “tally” was a stick marked with notches that tracked how much one owed or paid. The term came from the Latin “talea” meaning “stick, rod”.

37. Certain dieter’s credo NO CARBS
The eating of relatively few carbohydrates is central to the diet proposed by Robert Atkins. Atkins first laid out the principles behind the Atkins diet in a research paper published in 1958 in the “Journal of the American Medical Association”. He popularized his diet starting in 1972 with his book “Dr. Atkins’ Diet Revolution”.

38. Trifle SOU
A sou is an old French coin. We use the term “sou” to mean “an almost worthless amount”.

42. Hollywood, casually THE BIZ
That would be “showbiz”.

44. Autumn color OCHRE
Ochre is often spelled “ocher” in the US (it’s “ochre” where I come from). Ocher is a light, yellowy-brown color, although variations of the pigment are possible such as red ocher and purple ocher.

45. Certain Sri Lankan TAMIL
Tamils are a large ethnic group of almost 80 million people who speak Tamil as their mother tongue. Despite the large Tamil population, there is no Tamil state. The highest concentration of Tamils is in Sri Lanka, where they make up about 25% of the population.

The name Sri Lanka translates from Sanskrit into English as “venerable island”. Before 1970, Sri Lanka was known as Ceylon, a name given to the country during British rule. The lion on the country’s national flag symbolizes the fight against British colonialism.

46. Massey of “Balalaika” (1939) ILONA
Ilona Massey was a Hollywood actress, a native of Budapest in Hungary. Given her cultural background and the period at which she hit the big screen, Massey was marketed by the studios as “the new Dietrich”.

47. Fred McConnell’s daughter, in an old sitcom MINDY
Pam Dawber is the actress that teamed up with Robin Williams to play the lead roles in the sitcom “Mork & Mindy”. Dawber is married to the actor Mark Harmon.

53. 19th Greek letter TAU
Tau is the 19th letter of the Greek alphabet, the letter which gave rise to our Roman “T”. Both the letters tau (T) and chi (X) have long been symbolically associated with the cross.