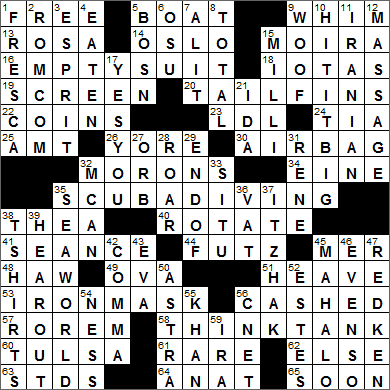 Today’s Wiki-est, Amazonian Googlies
Across
9. Sudden fancy WHIM
“Whim” meaning “sudden fancy” is such a lovely word, and one that we’ve been using in English since the 1640s. “Whim” is actually a shortened form of “whimwham” which has a similar meaning and has been around since the early 1500s.

13. Civil rights icon Parks ROSA
Rosa Parks was one of a few brave women in days gone by who refused to give up their seats on a bus to white women. It was the stand taken by Rosa Parks on December 1, 1955 that sparked the Montgomery, Alabama Bus Boycott. President Clinton presented Ms. Parks with the Presidential Medal of Freedom in 1996. When she died in 2005, Rosa Parks became the first ever woman to have her body lie in honor in the US Capitol Rotunda.

14. Scandinavian capital OSLO
Oslo is the capital of Norway. The city of Oslo burns trash to fuel half of its buildings, including all of its schools. The problem faced by the city is that it doesn’t generate enough trash. So, Oslo imports trash from Sweden, England and Ireland, and is now looking to import some American trash too.

15. Ballerina Shearer MOIRA
Moira Shearer was a ballet dancer and actress born Scotland. Shearer’s most famous film role was in 1948’s “The Red Shoes”, in which she played the lead character, a ballet dancer called Vicky Page. She was married to the respected English journalist and broadcaster Ludovic Kennedy.

18. Greek i’s IOTAS
Iota is the ninth letter in the Greek alphabet. We use the word “iota” to portray something very small as it is the smallest of all Greek letters.

23. “Bad” cholesterol letters LDL
LDL (low-density lipoprotein) is one of the compounds responsible for transporting fats around the body. When LDL is combined with cholesterol it can be referred to as “bad cholesterol”. This is because LDL actually transports cholesterol into the inner walls of blood vessels leading to atherosclerosis.

24. Acapulco aunt TIA
The Mexican city of Acapulco is on the southwest coast of the country, in the state of Guerrero. The name “Acapulco” translates from the local language into “at the big reeds”.

26. Olden times YORE
We use the word “yore” to mean “time long past” as in “the days of yore”. “Yore” comes from the Old English words for “of years”.

34. Mozart’s “__ kleine Nachtmusik” EINE
Mozart’s Serenade No. 13 for strings in G major, is better known as “Eine Kleine Nachtmusik”, which translates into “a little serenade”, but the more literal English translation of “a little night music” is often used. It is a delightful piece in four, very recognizable movements, although there is much debate about a “lost” fifth movement.

35. Underwater activity that requires the ends of 16-, 20-, 53- and 58-Across SCUBA DIVING
The self-contained underwater breathing apparatus (SCUBA) was co-invented by celebrated French marine explorer Jacques Cousteau.

38. TV’s “__-Team” THE A
“The A-Team” is an action television series that originally ran in the eighties. The A-Team was a group of ex-US special forces personnel who became mercenaries. Star of the show was Hollywood actor George Peppard, ably assisted by Mr. T and Robert Vaughan.

44. Mess (with), in slang FUTZ
To futz around is to waste time on trivial matters, to fool around. “Futz” is probably derived from a “not so nice” word that has been merged with “putz”.

45. Saint-Tropez sea MER
Saint-Tropez is a town in southeastern France on the French Riviera. These days, Saint-Tropez is very much associated with the European and American jet set. The town is named for a legendary martyr named Saint Torpes of Pisa. Torpes was supposedly executed on the orders of the Roman Emperor Nero. Having been beheaded, his head was tossed into the river Arno, and his body placed in a boat along with a cock and a dog who were to eat the body. The boat came ashore at the present-day location of Saint-Tropez, with the body untouched by the cock and the dog. The local people named their village in honor of Saint Torpes.

53. Identity-concealing attire, in a Dumas novel IRON MASK
“The Man in the Iron Mask” is the third part of a novel by Alexandre Dumas called “The Vicomte of Bragelonne: Ten Years Later”. The novel uses characters appearing in the earlier Dumas novel “The Three Musketeers”. In the plot, the musketeers are getting on in years and become involved in the mystery of “the man in the iron mask”, a prisoner locked up in French jails with his identity hidden behind a mask.

57. Composer Ned ROREM
American composer Ned Rorem is famous for his musical works, but also for his book “Paris Diary of Ned Rorem” that was published in 1966. Rorem talks openly about his sexuality in the book, and also about the sexuality of others including Noel Coward, Leonard Bernstein and Samuel Barber, much to some people’s chagrin.

60. City NW of Muskogee TULSA
Tulsa is the second-largest city in the state of Oklahoma (after Oklahoma City). Tulsa started out as a settlement established by the Loachapoka and Creek Native American tribes in 1836. These early settlers called their new home “Tallasi” meaning “old town”, and this name morphed into “Tulsa” that we use today.

The Oklahoma city of Muskogee was founded in 1898. Muskogee attracted national attention in 2008 when it elected John Tyler Hammons as the city’s 47th mayor, who was just 19 years old when elected. Hammons served two terms and then stepped down in 2012 in order to attend law school.

Down
1. Citrus-flavored diet drink FRESCA
Fresca is a Coca Cola product introduced in 1966, and is unusual in that it has no Pepsi Cola equivalent. It has always been marketed as a 0-calorie grapefruit drink, and so it’s artificially sweetened.

2. “You’ve Got Mail” genre ROMCOM
“You’ve Got Mail” is a 1998 romantic comedy film starring Tom Hanks and Meg Ryan, directed by Nora Ephron. The film is an adaptation of the Miklos Laszlo play “Parfumerie”. The storyline of “Parfumerie” was also used for the movies “The Shop Around the Corner” (from 1940 starring James Stewart and Margaret Sullivan) and “In the Good Old Summertime” (from 1949 starring Van Johnson and Judy Garland).

5. Cap’n’s underling BO’S’N
A boatswain works on the deck of a boat. A boatswain is unlicensed, and so is not involved in the navigation or handling of the vessel. He or she has charge of the other unlicensed workers on the deck. Boatswain is pronounced “bosun” and this phonetic spelling is often used interchangeably with “boatswain”. The contraction “bo’s’n” is also very popular.

6. Sch. in Columbus OSU
Ohio State University (OSU) was founded back in 1870 as the Ohio Agricultural and Mechanical College. The athletic teams of OSU are called the Buckeyes, named after the state tree of Ohio. In turn the buckeye tree gets its name from the appearance of its fruit, a dark nut with a light patch thought to resemble a “buck’s eye”.

11. Tehran native IRANIAN
Tehran is the capital of Iran and is the largest city in the Middle East, with a population of about 8.5 million. Iran has been around an awful long time and Tehran is actually the country’s 31st national capital.

15. Pop music’s __ Vanilli MILLI
Milli Vanilli famously won a Grammy and had it revoked when it was discovered that they didn’t even provide the lead vocals for the award-winning recording, and just lip-synced when performing on stage.

21. Boise’s state: Abbr. IDA
Boise, Idaho is the largest metropolitan area in the state by far. There are a number of stories pertaining to the etymology of the name “Boise”. One is that French trappers named the tree-lined river that ran through the area “la rivière boisée”, meaning “the wooded river”.

31. Thinker Descartes RENE
The great French philosopher Rene Descartes made the famous statement in Latin, “Cogito ergo sum”. This translates into French as “Je pense, donc je suis” and into English as “I think, therefore I am”.

32. Thom of shoes MCAN
Thom McAn footwear was introduced in 1922 by the Melville Corporation (now CVS Caremark). The brand was named after a Scottish golfer called Thomas McCann. The Thom McAn line is epitomized by the comfortable leather casual and dress shoe, so sales have really been hurt in recent decades by the growing popularity of sneakers.

35. San Diego marine mammal park SEAWORLD
The first SeaWorld park was opened in San Diego in 1964. The original plan was build an underwater restaurant with a marine life show. Eventually the founders dropped the idea of the eating establishment and just went with a theme park. SeaWorld has been mired in controversy since the 2013 release of the documentary “Blackfish”, which tells of the involvement of a particular orca (killer whale) in the death of two SeaWorld employees and one SeaWorld visitor.

37. Violinist Perlman ITZHAK
Itzhak Perlman is an Israeli-American violinist from Tel Aviv, and a virtuosi who I had the pleasure of hearing perform not too long ago. Little known fact: Perlman is a distant cousin of comedian Howie Mandel.

42. Punctuation in many lists COMMA
Our word “comma” comes into English via Latin from the Greek “komma” meaning “clause in a sentence”.

43. Actress Longoria EVA
Eva Longoria is a fashion model and an actress who had a regular role on TV’s “Desperate Housewives”, playing Gabrielle Solis.

45. Hawaiian thank-you MAHALO
In Hawaiian, “mahalo” means “thank you” and “mahalo nui loa” translates as “thank you very much”.

47. L’Oréal hair care brand REDKEN
L’Oréal is a French cosmetics company, the largest cosmetics and beauty company in the world.

52. Politician Kefauver ESTES
Estes Kefauver was a Democratic politician from Tennessee. In 1956 Kefauver was the running mate of Adlai Stevenson when Stevenson made a bid for the presidency. The pair lost to the Eisenhower-Nixon ticket.

55. Kublai __ KHAN
Kublai Khan was leader of the Mongol Empire from 1260 to 1294. Kublai Khan was a grandson of Genghis Khan. Kublai Khan had a summer garden at Kanadu, which famously was the subject of the 1797 poem “Kubla Khan” by Samuel Taylor Coleridge.

56. Tech news website CNET
c|net is an excellent technology website. c|net started out in 1994 as a television network specializing in technology news. The host of “American Idol”, Ryan Seacrest, started off his career as host of a c|net show.