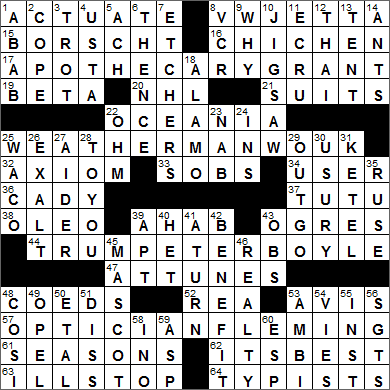 CROSSWORD SETTER: Jeffrey Wechsler
THEME: Moonlighters … each of today’s themed answers is formed by melding an occupation with name of a famous writer or actor:

The Volkswagen Rabbit is a small front-wheel drive car that is sold as the Volkswagen Golf outside of North America.

15. Red bowlful BORSCHT
Borscht is a beetroot soup that originated in Ukraine. Borscht can be served both hot and cold.

16. __ Itzá: Mayan ruins CHICHEN
Chichén Itzá is a Mayan ruin located in the Mexican state of Yucatán. It is the second most visited archaeological site in the country (after the ancient city of Teotihuacan). Chichén Itzá has seen a surge in the number of visitors since the development of nearby Cancún as a tourist destination.

17. Classic leading man who moonlighted at a pharmacy? APOTHECARY GRANT (apothecary + Cary Grant)
The wonderful, wonderful actor Cary Grant was born in Bristol in England, and was given the name Archibald Leach. In the 1949 Howard Hawks film “His Girl Friday”, there’s a line where Grant describes the fate suffered by someone who crossed him. He names that person “Archie Leach”, an ad-lib using his real name.

19. Second of 24 BETA
The Greek alphabet has 24 letters in total, and starts off with the letters alpha, beta, gamma …

20. L.A. Kings’ org. NHL
The Los Angeles Kings beat the New Jersey Devils in 2012 to win the Stanley Cup for the first time in the franchise’s history.

22. Fiji’s region OCEANIA
The part of the Pacific Ocean known as Oceania is roughly equivalent to the tropical islands of the South Pacific. Oceania can be divided into the regions of Polynesia, Melanesia and Micronesia.

25. Pulitzer-winning writer who moonlighted in a nightly news studio? WEATHERMAN WOUK (weatherman + Herman Wouk)
Herman Wouk won a Pulitzer in 1951 for his novel “The Caine Mutiny”. The story involves mutiny and court-martial aboard a US Navy vessel and reflected, at least partly, the personal experiences of Wouk as he served in the Pacific in WWII aboard a destroyer-minesweeper. The novel was adapted into a marvelous film released in 1954 starring Humphrey Bogart as Philip Queeg, the harsh captain of the USS Caine.

36. Tony winner Huffman CADY
Cady Huffman is an actress from Santa Barbara, California who now lives in New York City. Although appearing regularly on television and in film, Huffman is perhaps best known for her work on Broadway. She won her Tony Award for playing Ulla in the original cast of the Mel Brooks musical “The Producers”.

37. Bolshoi outfit TUTU
The word “tutu”, used for a ballet dancer’s skirt, is actually a somewhat “naughty” term. It came into English from French in the early 20th century. The French “tutu” is an alteration of the word “cucu”, a childish word meaning “bottom,” or “backside”.

38. Kitchen bar OLEO
Emperor Louis Napoleon III of France announced a competition to develop a substitute for butter, a substitute that would be more accessible to the lower classes and more practical for the armed forces. In 1869, a French chemist called Hippolyte Mege-Mouries came up with something that he called oleomargarine, which was eventually manufactured under the trade name “margarine”. The name “oleomargarine” also gives us our generic term “oleo”.

39. “I’d strike the sun if it insulted me” speaker AHAB
Captain Ahab is the obsessed and far from friendly captain of the Pequod in Herman Melville’s “Moby-Dick”. The role of Captain Ahab was played by Gregory Peck in the 1956 John Huston film adaptation. Patrick Stewart played Ahab in a 1998 miniseries in which Peck made another appearance, as Father Mapple.

44. Actor who moonlighted in a brass band? TRUMPETER BOYLE (trumpeter + Peter Boyle)
The actor Peter Boyle’s best-known roles were as Raymond’s father Frank Barone on the sitcom “Everybody Loves Raymond”, and as the monster in the Mel Brooks movie “Young Frankenstein”.

48. “Here Come the __”: 1945 college comedy CO-EDS
“Here Come the Co-Eds” is a 1945 Abbott and Costello movie. The storyline features a crucial college basketball game in which Lou Costello performs many trickshots himself. Costello actually was a basketball star when at high school in the real world.

52. Actor Stephen REA
Stephen Rea is an Irish actor from Belfast. Rea’s most successful role was Fergus in 1992’s “The Crying Game”, for which performance he was nominated for the Best Actor Oscar. In “The Crying Game”, Fergus was a member of the IRA. In real life, Rea was married to IRA bomber and hunger striker Dolours Price at the time he made the movie.

53. 18-Down competitor AVIS
(18D. 53-Across competitor ALAMO)
Avis has been around since 1946, and is the second largest car rental agency after Hertz. Avis has the distinction of being the first car rental company to locate a branch at an airport.

57. English author who moonlighted at LensCrafters? OPTICIAN FLEMING (optician + Ian Fleming)
Ian Fleming is most famous for writing the “James Bond” series of spy novels. You might also know that he wrote the children’s story “Chitty Chitty Bang Bang”, which was made into a cute movie released in 1968 and even a stage musical that opened in 2002.

Down
1. Rhyme scheme in many sonnets ABAB
A sonnet is a short poem with varying rhyming schemes but always with 14 lines. The sonnet form has been around at least since the 13th century. For example, the Shakespearean sonnet is composed of three quatrains (4 lines) and a final couplet (2 lines).

7. Rembrandt and Picasso, at times ETCHERS
The celebrated Dutch painter’s full name was Rembrandt Harmenszoon van Rijn (sometimes Ryn). Rembrandt is perhaps most appreciated for his portraits, and left the world a remarkable collection of self-portraits.

10. Puzzle sometimes framed JIGSAW
The original jigsaw puzzles were created by painting a picture on a sheet of wood and then cutting the picture into small pieces using a jigsaw, hence the name. Today, almost all jigsaw puzzles are pictures glued onto cardboard. The puzzle pieces are then die-cut, and there’s no jigsaw involved at all.

11. Hose shade ECRU
The shade called ecru is a grayish, yellowish brown. The word “ecru” comes from French and means “raw, unbleached”. “Ecru” has the same roots as our word “crude”.

18. 53-Across competitor ALAMO
(53A. 18-Down competitor AVIS)
The third largest car rental company right now is Alamo, a relative newcomer founded in 1974. Alamo made inroads (pun intended!) into the market by popularizing the idea of “unlimited mileage”.

22. Resistance unit OHM
The unit of electrical resistance is the ohm (with the symbol omega) named after German physicist Georg Simon Ohm. Ohm was the guy who established experimentally that the amount of current flowing through a circuit is directly proportional to the voltage applied, (V=IR) a relationship that every school kid knows as Ohm’s Law.

25. City SSW of Dallas WACO
In recent years, the city of Waco, Texas is perhaps most famous as the site of a siege and shootout between ATF agents and members of the Protestant sect known as the Branch Davidians. Shortly after ATF agents tried to execute a search warrant, shots were fired and at the end of the fight six people inside the Branch Davidian compound were dead, as were four agents. A fifty-day siege ensued at the end of which a final assault resulted in members of the community setting fire to the compound. Only nine people walked away from that fire. 50 adults and 25 children perished.

28. Piece of toast? TO YOU
Did you ever wonder why we use the term “toast” to drink someone’s health? The tradition probably dates back to the reign of Charles II, when the practice was to drink a glass of wine to the health of a beautiful or favored woman. In those days, spiced toast was added to beverages to add flavor, so the use of the word “toast” was an indicator that the lady’s beauty would enhance the wine. Very charming, I must say …

30. Activity of great interest? USURY
“Usury” was originally the name given to the practice of lending money at interest, but the term now refers to lending at excessive rates of interest.

31. __ One: vodka brand KETEL
Ketel One is a brand of vodka from the Netherlands. The vodka is distilled from wheat in copper pot stills, and “ketel” is Dutch for “pot still”.

45. Poe of the Baltimore Ravens, for one MASCOT
The Baltimore football team’s name “the Ravens” has a literary derivation. Baltimore was the home of the writer Edgar Allen Poe, and so the team took its moniker from his most famous poem, “The Raven”. The name was selected in a fan contest. Baltimore’s mascot is a raven named Poe. Prior to the 2008 season, the Raven’s had a trio of avian mascots: Edgar, Allan and Poe.

46. Certain agent’s area REALTY
The terms “realty” and “real estate” date back to the later 1600s, and are derived from the earlier meaning “real possession”, something one owns that is tangible and real.

48. Mozart title starter COSI
Mozart’s comic opera “Così fan tutte” is also known in English as “The School for Lovers”. The literal translation of the opera’s title is “Thus do all (women)”, or “Women are like that”.

49. General Motors subsidiary OPEL
Adam Opel founded his company in 1863, first making sewing machines in a cowshed. Commercial success brought new premises and a new product line in 1886, namely penny-farthing bicycles. Adam Opel died in 1895, leaving his two sons with a company that made more penny-farthings and sewing machines than any other company in the world. In 1899 the two sons partnered with a locksmith and started to make cars, but not very successfully. Two years later, the locksmith was dropped in favor of a licensing arrangement with a French car company. By 1914, Opel was the largest manufacturer of automobiles in Germany. My Dad had an Opel in the seventies, a station wagon (we’d say “estate car” in Ireland) called an Opel Kadett.

53. Both, at the start AMBI-
Someone who is ambidextrous can write with both hands or use both hands with equal ease. A fairly literal translation of “ambidextrous” is “right-handed on both sides” as “dexter” is Latin for “right-handed”.

55. Smithsonian, e.g.: Abbr. INST
The Smithsonian Institution was established in 1846 as the United States National Museum. The institution was renamed in honor of British scientist James Smithson who indirectly provided the initial funding. The funds were collected from England on the orders of President Andrew Jackson, and arrived in the form of 105 sacks containing 104,960 gold sovereigns.

56. PD ranks SGTS
A sergeant (sgt.) might word for a police department (PD).

59. Venom transmitter ASP
The asp is a venomous snake found in the Nile region of Africa. It is so venomous that the asp was used in ancient Egypt and Greece as a means of execution. Cleopatra observed such executions noting that the venom brought on sleepiness without any painful spasms. When the great queen opted to commit suicide, the asp was therefore her chosen method.