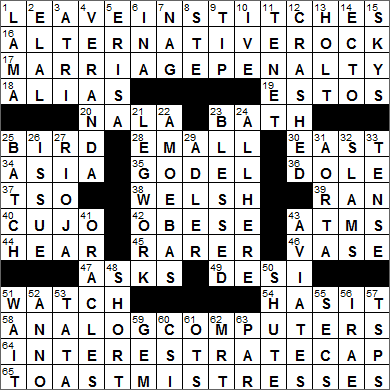 Today’s Wiki-est, Amazonian Googlies
Across
1. Amuse to the hilt LEAVE IN STITCHES
The term “in stitches” has been used since the thirties to mean laughing hysterically. The idea is that one can laugh so hard one can get a stitch of pain, a pain in the side.

16. Goth is a subgenre of it ALTERNATIVE ROCK
The musical genre of alternative rock has a relatively self-evident origin, as it is an alternative to traditional rock music. I’m no expert, not even close …

18. Blotter name ALIAS
A police blotter is (or used to be) a daily record of arrests made.

19. These, overseas ESTOS
Not these (estos) or these (esos), but the others (otros), in Spanish.

20. Film lioness NALA
In “The Lion King”, Nala is a lioness and the childhood friend of Simba.

23. Financial shellacking BATH
“To shellac” is a slang term meaning “to defeat decisively, to strike severely”.

25. T-__ BIRD
Ford manufactured the Thunderbird (T-Bird) from 1955 to 2005, originally as a two-seater sporty convertible. The T-Bird was introduced as a competitor to Chevrolet’s new sports car, the Corvette.

35. Logician friend of Einstein GODEL
Kurt Gödel was an American mathematician and philosopher who was born in Austro-Hungary. Gödel fled Austria just before World War II and relocated to Princeton, which was also home to Albert Einstein by this time. Gödel and Einstein were fond of taking long walks together.

37. Chinese dish eponym TSO
General Tso’s chicken is an American creation, often found on the menu of a Chinese restaurant. The name General Tso may be a reference to General Zuo Zongtang of the Qing Dynasty, but there is no clear link.

An eponym is a name for something derived from the name of a person, as in the “sandwich” named for the Earl of Sandwich.

38. Swansea-born WELSH
The city of Swansea is located on the coast in South Wales. It is the second largest city in Wales, after the capital of Cardiff. I love Swansea, and lived there for a couple of years …

40. Scary St. Bernard of fiction CUJO
“Cujo” is a Stephen King horror novel, which means that I have never read it (I don’t do horror). The character Cujo is a rabid St. Bernard dog which besieges a young couple for three days in their stalled car. King tells us that he lifted the dog’s name from real life, as Cujo was the nickname of Willie Wolfe, one of the men responsible for the 1974 kidnapping of Patty Hearst by the Symbionese Liberation Army.

46. Amphora, e.g. VASE
An amphora is a ceramic vase with two handles on either side of a long neck. The name “amphora” is Latin, coming from the Greek meaning “on both sides of the carrier”, referring to the two carrying handles.

49. Dino, __ & Billy: ’60s band that included sons of two musical celebs DESI
Dino, Desi and Billy were a singing group in the late sixties. Two of the trio were sons of famous parents. “Dino” was Dean Paul Martin, son of singer, actor and comedian Dean Martin. “Desi” was Desi Arnaz, Jr., the son of Desi Arnaz and Lucille Ball. Rounding out the group was a friend called Billy Hinsche.

65. Some emcees TOASTMISTRESSES
The term “emcee” comes from “MC”, an initialism standing for Master or Mistress of Ceremonies.

2. It has blue-striped jets EL AL
El Al Israel Airlines is the flag carrier of Israel. The term “el al” translates from Hebrew as “to the skies”.

3. Abruzzi bell town ATRI
Henry Wadsworth Longfellow wrote “The Sicilian’s Tale; The Bell of Atri”, a narrative poem set in the small town of Atri in the Abruzzo region of Italy.

4. Tara feature VERANDA
Rhett Butler hung out with Scarlett O’Hara at the Tara plantation in Margaret Mitchell’s “Gone with the Wind”. Tara was founded not far from the Georgia city of Jonesboro by Scarlett’s father, Irish immigrant Gerald O’Hara. Gerald named his new abode after the Hill of Tara back in his home country, the ancient seat of the High King of Ireland.

5. 1974 pension plan legislation ERISA
ERISA is the Employee Retirement Income Security Act, enacted in 1974. ERISA regulates the operation of a pension plan once it has been established. However, ERISA does not require that a pension plan be offered by an employer.

8. __-Chapelle: historic Paris church STE
Sainte-Chapelle is a beautiful Gothic chapel located on the Île de la Cité, the same island in the Seine that is home to Notre-Dame Cathedral. The name “Sainte-Chapelle” is usually translated as “Holy Chapel”. The chapel was built in the mid-1200s by Louis IX to house a relic that he believed to be the crown of thorns placed on the head of Jesus just prior to the Crucifixion.

11. Belief TENET
A tenet is an article of faith, something that is held to be true. “Tenet” is Latin for “he holds”.

13. “Dateline NBC” anchor Lester HOLT
Lester Holt is a television journalist. Holt is anchor for the weekend editions of the shows “Today” and “Nightly News” on NBC, as well as the show “Dateline NBC”.

14. Prefix with -plasm ECTO-
In the real world, ectoplasm is part of the cytoplasm of a cell. In the paranormal world, ectoplasm is that spiritual energy that some people claim to be able to see, that emanates from ghostly characters. It’s that ethereal shape that is sometimes seen in photographic images, which can be interpreted as the energy of some spirit from “the other side”. Spooky stuff …

22. Low life AMOEBAS
An ameba (or “amoeba” as we spell it back in Ireland) is a single-celled microorganism. The name comes from the Greek “amoibe”, meaning change. The name is quite apt, as the cell changes shape readily as the ameba moves, eats and reproduces.

27. Spanish wine region RIOJA
Rioja wines come from the province of La Rioja in Northern Spain. In my days living back in Europe, Rioja wines were noted for their heavy oaky flavors and it wasn’t uncommon to order a “rough Rioja” when out for dinner of an evening.

29. Freud contemporary ADLER
Alfred Adler was one of the group of medical professionals that founded the psychoanalytic movement. Today Adler is less famous than his colleague, Sigmund Freud.

31. Inner tube? AORTA
The aorta originates in the heart and extends down into the abdomen. It is the largest artery in the body.

41. Forecasters ORACLES
In Ancient Greece and Rome, an oracle was someone believed inspired by the gods to give wise counsel. The word “oracle” derives from the Latin “orare” meaning “to speak”, which is the same root for our word “orator”. One of the most important oracles of Ancient Greece was the priestess to Apollo at Delphi.

50. “On the Beach” novelist SHUTE
“On the Beach” is a wonderful novel by Nevil Shute, first published in 1957. The famous story is about the ending of the human race as nuclear fallout spreads south from the northern hemisphere after WWIII. The novel was adapted into a great 1959 movie starring Gregory Peck, Ava Gardner and even Fred Astaire.

56. “Dies __” IRAE
“Dies Irae” is Latin for “Day of Wrath”. It is the name of a famous melody in Gregorian Chant, one that is often used as part of the Roman Catholic Requiem Mass.

60. Show with many spin-offs CSI
The “CSI” franchise of TV shows has been tremendously successful, but seems to be winding down. “CSI: Miami” (the “worst” of the franchise, I think) was cancelled in 2012 after ten seasons. “CSI: NY” (the “best” of the franchise) was cancelled in 2013 after nine seasons. The original “CSI: Crime Scene Investigation”, set in Las Vegas, hung in there until 2015 when it ended with a two-hour TV movie.

62. He played Clubber Lang in “Rocky III” MR T
“Rocky III” is the movie in which Rocky (Sylvester Stallone) goes up against Clubber Lang (Mr. T). “Rocky III” is a forgettable film, but Mr. T was grateful for his role no doubt as it launched his career and landed him a spot on television’s “The A-Team”. Also making an appearance was professional wrestler Hulk Hogan, an appearance that raised his profile as well and kick-started his career outside of the ring. But for me the most memorable thing is the song “Eye of the Tiger”, which was commissioned for “Rocky III”. A great tune …

63. Links figure PAR
The oldest type of golf course is a links course. The name “links” comes from the Old English word “hlinc” meaning “rising ground”. “Hlinc” was used to describe areas with coastal sand dunes or open parkland. As a result, we use the term “links course” to mean a golf course that is located at or on the coast, often amid sand dunes. The British Open is always played on a links course.