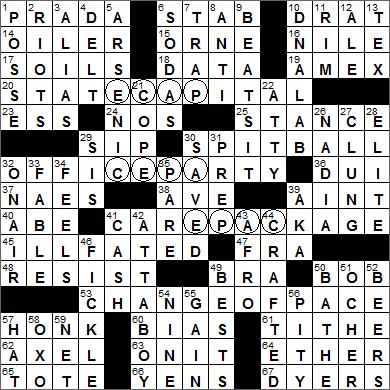 CROSSWORD SETTER: C.W. Stewart
THEME: Change of Pace … each of today’s themed answers contains a hidden string of four-letters. Each of those strings of letters is the word PACE rearranged, a CHANGE OF PACE:

53A. Deviation from a normal routine, and a hint to this puzzle’s circles CHANGE OF PACE

Today’s Wiki-est, Amazonian Googlies
Across
1. Big name in designer bags PRADA
Prada was started in 1913 as a leathergoods shop in Milan, by the two Prada brothers. One of the brothers, Mario Prada, prevented the female members of his family participating in the company as he didn’t believe women should be involved in business (!). When the sexist brother died, his son had no interest in the business so it was his daughter who took over and ran the company for about twenty years, handing it over to her own daughter. I’d say the devil loved that …

14. Edmonton NHL player OILER
The National Hockey League’s Edmonton Oilers are so called because they are located in Alberta, Canada … oil country.

15. Caen’s river ORNE
Orne is a department and river in the northwest of France. Perhaps one of the most famous locations in Orne is the village of Camembert, the home of the famous (and delicious!) cheese.

16. World’s longest river NILE
Depending on definition, the Nile is generally regarded as the longest river on the planet. The Nile forms from two major tributaries, the White Nile and the Blue Nile, which join together near Khartoum, the capital of Sudan. From Khartoum the Nile flows north, traveling almost entirely through desert making it central to life for the peoples living along its length.

19. “My life. My card” co. AMEX
“Amex” is short for American Express. In dollar terms, there are more transactions conducted in the US using the Amex card than any other card.

20. Madison or Jackson, e.g. STATE CAPITAL
Madison is the second-largest city in Wisconsin (after Milwaukee), and is the state capital. The city was named for President James Madison, who was one of the signers of the US Constitution. Many of Madison’s first streets were named for the 39 other signatories.

23. Start of something? ESS
The word “something” starts with the letter S (ess).

30. Illegal diamond pitch SPITBALL
A “spitball” is an illegal pitch in baseball in which saliva, petroleum jelly or some other material has been applied to one side of the ball. The foreign substance makes a subtle change to the wind resistance and weight of that side of the ball, causing it to move atypically during a pitch.

36. MADD concern DUI
In some states, there is no longer a legal difference between a DWI (Driving While Intoxicated) and a DUI (Driving Under the Influence). Other states retain that difference, so that by definition a DUI is a lesser offence than a DWI.

Candice Lightner lost her 13-year-old child to a drunk driver in 1980. Soon after, Lightner formed the group Mothers Against Drunk Driving (MADD).

38. Many a Monopoly rd. AVE
The street names in the US version of Monopoly are locations in or around Atlantic City, New Jersey.

39. “__ No Sunshine”: Bill Withers hit AIN’T
Bill Withers was working as an assembly operator while he was trying to make a name for himself in the music industry, actually making toilet seats for Boeing 747 airplanes. Even as Withers found success with his glorious 1971 single “Ain’t No Sunshine”, he held onto his day job, worried that the music industry was unpredictable.

40. Emancipation Proclamation first name ABE
The Emancipation Proclamation was issued by President Abraham Lincoln on January 1, 1863 during the Civil War. The order freed slaves in Confederate territory, but did not apply to the five slave states that were not in rebellion. Slavery became illegal in the whole of the United States in December 1865 when the Thirteenth Amendment to the US Constitution was ratified.

45. Like the Titanic ILL-FATED
The RMS Titanic set off on her tragic maiden voyage in 1912, sailing from Southampton, England bound for New York City. Regulations only required that the ship have lifeboat capacity for 1,178 people, even though a full complement of passengers and crew was 3,547. When the order was given to abandon ship, the captain adhered to the traditional protocol of “women and children first”. As a result, only 20% of male passengers survived the disaster, compared to 75% of the female passengers. Perhaps more telling is that 61% of those in first class survived, and only 25% of those in third class. The crew fared even worse though, with only 24% making it.

49. Bikini part BRA
The origin of the name “bikini”, a type of bathing suit, seems very uncertain. My favorite story is that it is named after the Bikini Atoll, site of American A-bomb tests in the forties and fifties. The name “bikini” was chosen for the swim-wear because of the “explosive” effect it had on men who saw a woman wearing the garment!

61. Churchgoer’s donation TITHE
Traditionally, a “tithe” is a payment of one tenth of a person’s annual income and is usually given to a church. Tithing is a practice taught in many traditions, and according to a 2002 survey, about 3% of American adults donate 10% or more of their income to a church.

62. Figure skating leap AXEL
An Axel is a forward take-off jump in figure skating. It was first performed by Norwegian Axel Paulsen at the 1882 World Figure Skating championships.

64. Bygone anesthetic ETHER
Ethers are a whole class of organic compounds, but in the vernacular “ether” is specifically diethyl ether. Diethyl ether was once very popular as a general anesthetic.

66. Cravings YENS
The word “yen”, meaning “urge”, has been around in English since the very early 1900s. It comes from the earlier word “yin” imported from Chinese, which was used in English to describe an intense craving for opium!

Down
1. Wild West law group POSSE
Our word “posse” comes from an Anglo-Latin term from the early 15th century “posse comitatus” meaning “the force of the county”.

4. Shoulder muscle, informally DELT
The deltoid muscle is actually a group of muscles, the ones that cover the shoulder and create the roundness under the skin. The deltoids are triangular in shape resembling the Greek letter delta, hence the name.

5. Pesticide poison ARSENIC
Because of arsenic’s toxicity, it was very commonly used in pesticides. These compounds are getting banned over time, but it seems there is a long way to go. Arsenic in aquifers continues to be a problem around the world, including here in the US. China has introduced limits to the amounts of arsenic permitted in food as well as water, mainly as the staple food of rice is particularly good at accumulating arsenic from groundwater.

6. Coke and Pepsi SODAS
The first cola drink to become a commercial success was Coca-Cola, soon after it was invented by a druggist in 1886. That original Coca-Cola was flavored mainly with kola nuts and vanilla. The formulation was based on an alcoholic drink called Coca Wine that had been on sale for over twenty years. The original alcoholic version actually contained a small concentration of cocaine.

9. Skedaddles BEATS IT
“Skedaddle ” is a slang term meaning “run away” that dates back to the Civil War.

13. Apt name for a Dallas cowboy? TEX
The Dallas Cowboys play in the National Football Conference of the NFL. The Cowboys are famous for a lengthy streak of 20 consecutive winning seasons, from 1966 to 1985. They are the highest-valued sports franchise in the country. The only team in the world that’s worth more money is the UK’s Manchester United soccer team.

26. Gymnast Comaneci NADIA
Nadia Comaneci won three golds in the 1976 Summer Olympics and was the first gymnast to be awarded a perfect score of a ten in the gymnastics competition. Comaneci published a book called “Letters to a Young Gymnast” in 2003, and now lives in the United States.

29. Sally, to Charlie Brown SIS
In the “Peanuts” comic strip by Charles M. Schulz, the protagonist Charlie Brown has a younger sister Sally Brown. Sally is often the dominant person in the sibling relationship, and sometimes for Charlie to do her homework.

30. Fed the piggy bank SAVED
The word “pig” can be used for earthenware, or an earthenware shard. From this usage there evolved the term “pig jar” that described an earthenware pot that could be filled with water for use as a bed-warmer. Crockery pots were also used to collect coins and these were also termed “pig jars”. By the 1700s, these pig jars had evolved into the first “piggy banks”.

39. Police blotter letters AKA
Also known as (aka)

A police blotter is (or used to be) a daily record of arrests made.

51. Earth pigment OCHER
“Ochre” is often spelled “ocher” in the US (it’s “ochre” where I come from). Ocher is a light, yellowy-brown color, although variations of the pigment are possible such as red ocher and purple ocher.

57. Bowler or boater HAT
I think a bowler hat is usually called a derby here in the US. The bowler was first produced in 1849 in London by hatmakers Thomas and William Bowler, hence the name. The alternative name of “derby” comes from the tradition of wearing bowler hats at the Derby horse race (a major race held annually in England).

58. Kitchen gadgets brand OXO
The OXO line of kitchen utensils is designed to be ergonomically superior to the average kitchen too. The intended user of OXO products is someone who doesn’t have the normal range of motion or strength in the hands e.g. someone suffering from arthritis.

59. Common URL ending NET
The .net domain was one of the six original generic top-level domains specified. The complete original list is: