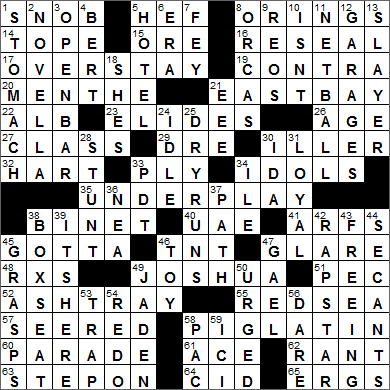 CROSSWORD SETTER: Robin Stears
THEME: Pig Latin … today’s themed clues may look like regular regular English words, but they are actually examples of PIG LATIN. To translate them into the “English” answer, we first have to drop the -ay suffix. Then we take the last consonant sound and place it at the front of the word:

58A. What four puzzle answers need to be written in PIG LATIN

Today’s Wiki-est, Amazonian Googlies
Across
5. “The Girls Next Door” co-creator, for short HEF
Hugh Hefner (often called “Hef”) is from Chicago. His first publishing job was in the military, where he worked as a writer for a US Army newspaper from 1944-46. He went to college after his military service and then worked as a copywriter for “Esquire” magazine. He left “Esquire” to found his own publication that he called “Playboy”, which first hit the newsstands in 1953. “Playboy” has been around ever since.

“The Girls Next Door” is a reality TV show that aired from 2005 to 2010. It follows Hugh Hefner’s girlfriends who live with him at the Playboy Mansion.

14. Lift one’s spirits? TOPE
“To tope” is to drink alcohol excessively and habitually.

17. Big name in chocolate OVERSTAY (“OVER-ST-AY” translates into “STOVER”)
Russell Stover and a partner started in business in 1921. Their company’s initial product was the world’s first chocolate-dipped ice cream bar that they called an Eskimo Pie. When competition for the ice cream product became too intense, Russell and his wife formed a new company to make boxed chocolates. That enterprise was formed in 1923, and the chocolates were originally known as Mrs. Stover’s Bungalow Candies. They were renamed to Russell Stover Candies in 1943.

22. NATO member since 2009 ALB
The Republic of Albania is a country in the Balkans in southeastern Europe. Albania was made a communist state after WWII but became independent again with the collapse of the Soviet Union in 1990. Albania has been a member of NATO since 2009, and was accepted as an official candidate to join the European Union in 2014.

30. Danube tributary ILLER
The Iller is a river in Germany, a tributary of the Danube. The Iller rises in the Alps and enters the Danube in the city of Ulm.

32. Early 20th-century poet __ Crane HART
American poet Hart Crane’s most famous work is the epic poem “The Broken Tower”, which was published just a few months before committing suicide. Crane was travelling by steamship from Mexico to New York, and threw himself overboard into the Gulf of Mexico, exclaiming, “Goodbye, everybody!”.

38. IQ test name BINET
The first usable intelligence test was invented by a French psychologist named Alfred Binet. Binet collaborated with Théodore Simon and together they produced the Binet-Simon Intelligence Scale that is still in use today for IQ tests.

40. Abu Dhabi is its cap. UAE
Abu Dhabi is one of the seven Emirates that make up the federation known as the United Arab Emirates (UAE). The two largest members of the UAE (geographically) are Dubai and Abu Dhabi, the only two of the seven members that have veto power over UAE policy. Before 1971, the UAE was a British Protectorate, a collection of sheikdoms. The sheikdoms entered into a maritime truce with Britain in 1835, after which they became known as the Trucial States, derived from the word “truce”.

46. AC/DC song with the words “I’m dynamite” TNT
The Heavy Metal band known as AC/DC was formed by two brothers in Australia. The group is usually called “Acca Dacca” down under.

48. Pharm. drop-offs RXS
There seems to some uncertainty about the origin of the symbol “Rx” that’s used for a medical prescription. One explanation is that it comes from the astrological sign for Jupiter, a symbol put on prescriptions in days of old to invoke Jupiter’s blessing to help a patient recover.

49. “WarGames” computer JOSHUA
“WarGames” is a really fun 1983 movie starring Matthew Broderick and Ally Sheedy. There was a sequel that was released in 2008 called “WarGames: The Dead Code”. I haven’t seen it, and I fear I might be disappointed …

51. Muscle mag subject PEC
“Pecs” is the familiar term for the chest muscle, more correctly known as the pectoralis major muscle. “Pectus” is a the Latin word for “breast, chest”.

55. Biblical escape obstacle RED SEA
The Red Sea (sometimes called the Arabian Gulf) is a stretch of water lying between Africa and Asia. The Gulf of Suez (and the Suez Canal) lies to north, and the Gulf of Aden to the south. According to the Book of Exodus in the Bible, God parted the Red Sea to allow Moses lead the Israelites from Egypt.

58. What four puzzle answers need to be written in PIG LATIN
Pig Latin is in effect a game. One takes the first consonant or consonant cluster of an English word and moves it to the end of the word, and then adds the letters “ay”. So the Pig Latin for the word “nix” is “ix-n-ay” … ixnay, and for “scram” is “am-scr-ay”

61. Big heart ACE
The ace would be a big heart, a high-ranking card.

64. El __ CID
Rodrigo Diaz de Vivar was known as El Cid Campeador, which translates as “The Champion” or perhaps “The Lord, Master of Military Arts”. El Cid was a soldier who fought under the rule of King Alfonso VI of Spain (among others). However, he was sent into exile by the King in 1080, after acting beyond his authorization in battle. El Cid then offered his services to his former foes, the Moorish kings, After a number of years building a reputation with the Moors, he was recalled from exile by Alfonso. By this time El Cid was very much his own man. Nominally under the orders of Alfonso, he led a combined army of Spanish and Moorish troops and took the city of Valencia on the Mediterranean coast, making it is headquarters and home. He died there, quite peacefully in 1099.

65. Energy units ERGS
An erg is a unit of mechanical work or energy. It is a small unit, as there are 10 million ergs in one joule. it has been suggested that an erg is about the amount of energy required for a mosquito to take off.

2. “Breakfast at Tiffany’s,” for one NOVELLA
“Breakfast at Tiffany’s” is a 1958 novella written by Truman Capote. Truman’s colorful protagonist in the story is Holiday “Holly” Golightly, who was played so very, very ably by Audrey Hepburn in the marvelous 1961 movie adaptation. It must be said that the film is a rather loose interpretation of Capote’s novella.

7. Early 2000s “SNL” standout FEY
Comic actress Tina Fey has a scar on her face a few inches long on her left cheek, which I was shocked to learn was caused by a childhood “slashing” incident. When she was just five years old and playing in the front yard of her house, someone just came up to her and slashed her with a knife. How despicable!

8. “Blackfish” creatures ORCAS
“Blackfish” is a 2013 documentary film that examines the dangers of keeping orca in captivity.”Star” of the movie is a killer whale (orca) named Tilikum who was responsible in whole or in part for the deaths of three people. Tilikum was captured in 1983 and has been a “guest” of SeaWorld since 1992. Most recently, Tilikum killed a 40-year old trainer named Dawn Brancheau in 2010.

9. Model T contemporaries REOS
The REO Motor Company was founded by Ransom Eli Olds (hence the name REO). The company made cars, trucks and buses, and was in business from 1905 to 1975 in Lansing, Michigan. Among the company’s most famous models were the REO Royale and the REO Flying Cloud.

The Ford Model T was the first really affordable car that was offered for sale, and it was produced from 1908 to 1927. It was the Model T that ushered in the era of assembly line production, which greatly cut down the cost of manufacture. The Model T’s engine was designed to run on petrol, kerosene or ethanol.

10. “__ that special?!” ISN’T
The idiomatic phrase “Isn’t that special?” is perhaps most associated with the Church Lady, a character played by Dana Carvey on “Saturday Night Live”.

11. Court surprise NET BALL
In tennis, a “net ball” is any ball that hits the net.

13. Buffy, for one SLAYER
“Buffy the Vampire Slayer” is a TV series that originally aired from 1997 to 2003. “Buffy …” was incredibly successful, especially given that it wasn’t aired on the one of the big four networks. The show was created by Joss Whedon and starred Sarah Michelle Gellar in the title role.

Tom Jones, now he has a real voice and is a great showman. I saw him in Las Vegas many, many moons ago, one of the best Vegas shows I’ve ever attended. Although Tom Jones is a carefully selected stage name (he was born Thomas Woodward) the name isn’t too far from reality as Jones is his mother’s maiden name. The stage name was chosen by his manager to capitalize on the appeal of “Tom Jones”, a filmed version of the Henry Fielding novel that was having a successful run at the time. The name also emphasized Tom’s Welsh roots, as Jones is a very common name in Wales.

30. Wash. neighbor IDA
The states of Washington (Wash.) and Idaho (Ida.) are neighbors.

42. Drake or Nelly RAP STAR
Drake is the stage name of rapper Aubrey Graham from Toronto.

The Celts were a very broad group of people across Europe, linked by common languages. The Celts were largely absorbed by other cultures, although a relatively modern revival of the “Celtic identity” is alive and well in the British Isles. Such Celtic peoples today are mainly found in Ireland, Scotland, Wales and Brittany in France..

49. Will Smith’s second son JADEN
Child actor Jaden Smith is the son of actors Will Smith and Jada Pinkett Smith. I think I’ve only seen Jaden play one role on the screen, as the title character in the 2010 remake of “The Karate Kid”. I must say, that is a very entertaining film and young Jaden did a great job.

58. __-Man PAC
The Pac-Man arcade game was first released in Japan in 1980, and is as popular today as it ever was. The game features characters that are maneuvered around the screen to eat up dots and earn points. The name comes from the Japanese folk hero “Paku”, known for his voracious appetite. The spin-off game called Ms. Pac-Man was released in 1981.

59. In this emplacement ICI
In French, this “emplacement” (location) is “ici” (here).