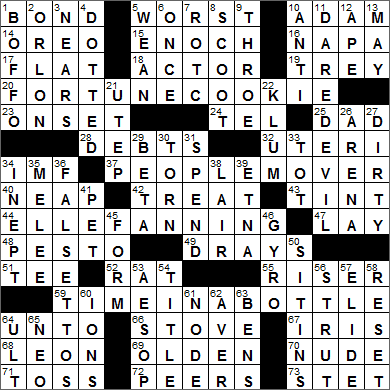 CROSSWORD SETTER: Jeff Stillman
THEME: Magazines … each of today’s themed answers is a common phrase that starts with the title of a magazine. The answer is clued with reference to that magazine:

Today’s Wiki-est, Amazonian Googlies
Across
10. Eldest son on “Bonanza” ADAM
On the TV show “Bonanza”, the character named Adam was one one of the Cartwright sons, the others being Hoss and Little Joe. Adam was played by actor Pernell Roberts.

The western TV series “Bonanza” ran for 14 seasons, making it the second longest running western show on television (after “Gunsmoke”, which ran for 20 seasons).

16. City ENE of Petaluma NAPA
The first commercial winery in Napa Valley, California was established way back in 1858. However, premium wine production only dates back to the 1960s, with the region really hitting the big time after its success at the Paris Wine Tasting of 1976. The story of that famous blind wine tasting is told in the entertaining 2008 film “Bottle Shock”.

19. A four beats it TREY
A trey of clubs, for example, is a name for the three of clubs in a deck of cards. The name “trey” can also be used for a domino with three pips, and even a three-point play in basketball.

20. Financial magazine tracking device? FORTUNE COOKIE (“Fortune” magazine + “cookie”)
“Fortune” is a bi-weekly business magazine that was founded by Henry Luce in 1930, just four months after the 1929 Wall Street Crash. “Fortune” is noted for its annual ranking of companies by revenue, especially the Fortune 500.

When you visit a website, often it will leave a little piece of text information called a “cookie” on your computer. As a cookie is a text file, and not executable, it is relatively harmless. However, as browsers routinely read these text files, cookies can be used as “spyware”. Basically, the browser can read the cookie and tell a lot about your browsing habits. This can be a good thing, so when you go back to your favorite websites you will be recognized and this can help you. For example, you may have shopped at a site and you’ll find that your shopping cart still has the items you were looking at, often because the items were stored in a cookie. However, they can be “bad” as some spyware uses the cookies to detect your browsing habits and can direct the browser to do things you may not want it to do. So, I only accept cookies from sites I trust, as they do enhance the browsing experience …

32. Development sites UTERI
The Latin “uterus” (plural “uteri”) translates as both “womb” and “belly”. The Latin word was derived from the Greek “hystera” also meaning womb, which gives us the words “hysterectomy”, and “hysterical”.

34. World currency org. IMF
The International Monetary Fund (IMF) was established at the end of 1945 with 29 major economies supporting and funding an effort to stabilize economies across the globe after WWII. Headquartered in Washington, D.C., today the IMF has 187 member countries.

37. Newsstand selling many a human-interest magazine? PEOPLE MOVER (“People” magazine + “mover”)
There used to be a “People” page in each issue of “Time” magazine. This page was spun-off in 1974 as a publication of its own, which we now call “People” magazine. “People” is noted for its annual special editions with features such as “Best & Worst Dressed” and “Sexiest Man Alive”. The “Sexiest Man Alive” edition now appears at the end of November each year. The first choice for “Sexiest Man” was Mel Gibson, in 1985.

48. Green sauce PESTO
The term “pesto” applies to anything made by pounding. What we tend to know as “pesto” sauce is more properly called “pesto alla genovese”, pesto from Genoa in northern Italy. I love, love pesto sauce …

55. Piece between steps RISER
The “riser” is the vertical part of a step in a flight of stairs.

59. Rolled-up news magazine drifting at sea? TIME IN A BOTTLE (“Time” magazine + “in a bottle”)
“Time in a Bottle” is a song written by Jim Croce in 1970 and recorded by him in 1972. The song was released as a single in 1973, soon after Croce died in a plane crash. It was to be Croce’s last number-one hit.

68. Singer Redbone LEON
Leon Redbone is a singer-songwriter from Canada. One of Redbone’s claims to fame is that he sang the theme song for the sitcom “Mr. Belvedere”.

70. Au naturel NUDE
“Au naturel” is a French phrase, simply meaning “in a natural state”. We use the term in the same sense, and also to mean “nude”.

71. Deep-six TOSS
To deep-six something is to toss it, possibly overboard, or to completely destroy it. The derivation of this slang term is from “six feet deep”, not the length of a fathom but rather the traditional depth of a grave.

72. Dukes and barons PEERS
In Britain, there are five ranks of peer, namely duke, marquess, earl, viscount and baron, in descending order.

73. Proofreading mark STET
“Stet” is a Latin word meaning “let it stand”. In editorial work, the typesetter is instructed to disregard any change previously marked by writing the word “stet” and then underscoring that change with a line of dots or dashes.

Down
1. Smashing, in show biz BOFFO
“Boffo” is show biz slang for “very successful”, a term that dates back to the early sixties.

2. Synthetic fabric ORLON
Orlon is the brand name used by the DuPont Corporation for the acrylic fibers the company developed in 1941.

4. Like staccato notes DOTTED
Staccato is a musical direction signifying that notes should be played in a disconnected form. A dot is placed above notes in a score that are to be played in such a manner. The opposite of staccato would be legato, long and continuous notes played very smoothly.

7. Drilling gp. ROTC
The Reserve Officers’ Training Corps (ROTC) is a training program for officers based in colleges all around the US. The ROTC program was established in 1862 when as a condition of receiving a land-grant to create colleges, the federal government required that military tactics be part of a new school’s curriculum.

9. Sharp pang THROE
Our contemporary word “throe”, meaning a spasm of pain, has been around since the early 1600s. It is a different spelling of the word “throwe” that had been around since around 1200 AD and which meant pain, particularly a pang of childbirth or the agony of death. Pain, from cradle to grave …

12. Gorilla, for one APE
The gorilla is the largest primate still in existence, and is one of the nearest living species to humans. Molecular biology studies have shown that our nearest relatives are in fact the species in the genus Pan (the chimpanzee and the bonobo), which split from the human branch of the family 4-6 million years ago. Gorillas and humans diverged at a point about 7 million years ago. The term “gorilla” derives from the Greek “gorillai” meaning “tribe of hairy women”. Wow!

21. The Miners of Conf. USA UTEP
The University of Texas at El Paso (UTEP) was founded in 1914, originally as the Texas State School of Mines and Metallurgy. To this day there is a mine shaft on the campus, and the mascot of the school’s sports teams is Paydirt Pete, a prospector from the mining industry. The teams are also known as the UTEP Miners and Lady Miners.

22. “Project Runway” host KLUM
German-born Heidi Klum was married to the successful English singer, Seal. Klum is a talented lady and has built a multi-faceted career based on her early success as a model. She is the force behind the Bravo reality show called “Project Runway” that has been on the air since 2004. Klum has been nominated 4-5 times for an Emmy for her association with the show. Klum was also signed up as the official ambassador for Barbie in 2009, the 50th anniversary of the Barbie Doll, and for her service that year a Heidi Klum Barbie was produced. She has been adding a touch of class to the judging panel on the show “America’s Got Talent” since 2013.

“Project Runway” is a reality show that is hosted by model Heidi Klum. On the show, contestants compete by presenting clothes designs having been given limited time and materials. “Project Runway” is now a worldwide franchise. North of the border, the show is called “Project Runway Canada” and is hosted by supermodel Iman. The show in the UK is known as “Project Catwalk” and has had several hosts, including Elizabeth Hurley and Kelly Osbourne.

35. Fracas MELEE
Our word “melee” comes from the French “mêlée”, and in both languages the word means “confused fight”.

“Fracas” is a French word that we absorbed into English. In turn, the French usage evolved from the Italian “fracasso” meaning “uproar, crash”.

36. Some doo-wop voices FALSETTOS
Doo-wop developed in the 1940s and can be described as a vocal-based R&B music. Even though the style has been around since the forties, the name doo-wop wasn’t introduced until the early sixties.

39. Mount near Catania ETNA
Mt. Etna is the largest of three active volcanoes in Italy. Mt Etna is about 2 1/2 times the height of its equally famous sister, Mt. Vesuvius. The third of Italy’s famous volcanoes is Stromboli.

Catania is the second largest city on the island of Sicily (after Palermo). Catania has a long and rich cultural history, and today is best known as a center for technology industries earning it the nickname of the “European Silicon Valley”.

46. Sandwich with tzatziki sauce GYRO
A gyro is a traditional Greek dish, a sandwich made with pita bread containing meat, tomato, onion and tzatziki (a yogurt and cucumber sauce). The meat for gyros is usually roasted on a tall vertical spit and is sliced from the spit as required. The name “gyro” comes from the modern Greek word “gyros” meaning “circle”, a reference to the meat turning as it is grilled in a rotating circular motion.

53. Notable author of animal tales AESOP
Aesop is remembered today for his famous fables. Aesop lived in Ancient Greece, probably around the sixth century BC. Supposedly he was born a slave, somehow became a free man, but then met with a sorry end. Aesop was sent to the city of Delphi on a diplomatic mission but instead insulted the Delphians. He was tried on a trumped-up charge of stealing from a temple, sentenced to death and was thrown off a cliff.

56. Walk like Jagger STRUT
Sir Mick Jagger met up with Keith Richards at school when Jagger was only 7-years-old. They were to become one of the most successful songwriting duos of all time, rivaling Lennon and McCartney (some say!).

58. Pedometer button RESET
A pedometer is an instrument worn by a runner or walker that measures the number of steps taken. The name of the device comes from “pes”, the Latin for “foot”.

63. Uncle __ BEN’S
Uncle Ben’s is a famous brand of rice introduced in 1943. It was the biggest selling brand of rice in the US from the fifties through the nineties. As one might imagine, the name “Uncle Ben” is pretty offensive and Mars, who owns the brand now, have tried to distance themselves from the African-American slave/domestic servant image. In 2007 there was a TV campaign showing “Uncle Ben” as Chairman of the Board of the company. But, he is still called Uncle Ben …

65. Prefix with con NEO-
By definition, a neoconservative (neocon) supports the use of American power and military to bring democracy, liberty, equality and human rights to other countries.