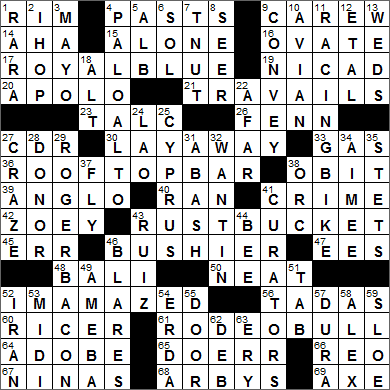 68A. “We Have The Meats” fast food chain, and a homophonic hint to the six longest puzzle answers ARBY’S (sounds like “RBs”)

Today’s Wiki-est, Amazonian Googlies
Across
9. Infielder Rod in Cooperstown CAREW
Rod Carew is a former Major League Baseball player from Panama. Actually. Carew is a “Zonian”, meaning that he was born in the Panama Canal Zone, a political entity that existed for decades from 1903.

19. Battery acronym NICAD
A NiCad rechargeable battery is so called because the electrodes are made of nickel oxide hydroxide and metallic cadmium.

20. Olympics skating analyst Ohno APOLO
Speed-skater Apolo Ohno has won more Winter Olympics medals than any other American. Ohno also did a great job winning the 2007 season of television’s “Dancing with the Stars”.

21. Laborious tasks TRAVAILS
A “travail” is a really difficult task or burden. “Travail” is the French for “work”.

23. Post-shower powder TALC
Talc is a mineral, actually hydrated magnesium silicate. Talcum powder is composed of loose talc, although these days “baby powder” is also made from cornstarch.

38. “In memoriam” bio OBIT
“Obituary” comes from the Latin “obituaris”, originally the record of the death of a person, although the literal meaning is “pertaining to death”.

Jamie Lynn Spears is a actress and singer, and the younger sister of pop star Britney Spears. Jamie Lynn was a regular on the comedy show “All That” and the star of “Zoey 101”, both being Nickelodeon productions.

48. Indonesian island BALI
Bali is both an island and a province in Indonesia. It is a popular tourist spot, although the number of visitors dropped for a few years as a result of terrorist bombings in 2002 and 2005 that killed mainly tourists. Bali became more popular starting in 2008 due to a significant and favorable change in the exchange rate between the US dollar and the Indonesian rupiah.

61. Bucking ride RODEO BULL
“Rodeo” is a Spanish word, which is usually translated as “round up”.

64. Sun-dried brick ADOBE
The building material known as adobe has been around a long time, and has been used in dry climates all over the world. The original form of the word “adobe” dates back to Middle Egyptian times, about 2000 BC. The original spelling is “dj-b-t”, and translates as mud (sun-dried) brick.

65. Hall of Fame second baseman Bobby DOERR
Bobby Doerr is a former baseball player and coach for the Boston Red Sox. Doerr attended the 100th anniversary celebration of Fenway Park in 2012. He was 94 years of age at the time, and was the oldest person in attendance that day at the park.

66. Vintage roadster REO
The REO Motor Company was founded by Ransom Eli Olds (hence the name REO). The company made cars, trucks and buses, and was in business from 1905 to 1975 in Lansing, Michigan. Among the company’s most famous models were the REO Royale and the REO Flying Cloud.

67. Guadalajara girls NINAS
Guadalajara is a populous city in the Mexican state of Jalisco. The Mexican city is named after the city of the same name in the center of Spain.

68. “We Have The Meats” fast food chain, and a homophonic hint to the six longest puzzle answers ARBY’S (sounds like “RBs”)
The Arby’s chain of fast food restaurants was founded in 1964 by two brothers, Forrest and Leroy Raffel. The name “Arby’s” is a homonym of “RB’s”, standing for “Raffel Brothers”.

3. Spread on a BLT MAYO
Mayonnaise originated in the town of Mahon in Menorca, a Mediterranean island belonging to Spain. The Spanish called the sauce “salsa mahonesa” after the town, and this morphed into the French word “mayonnaise” that we use in English today.

4. City near Stanford University PALO ALTO
The city of Palo Alto, California takes its name from a specific redwood tree called El Palo Alto (Spanish for “the tall stick”) that is located within the bounds of the city. The tree is 110 feet tall and over a thousand years old.

5. Greece neighbor: Abbr. ALB
The Republic of Albania is a country in the Balkans in southeastern Europe. Albania was made a communist state after WWII but became independent again with the collapse of the Soviet Union in 1990. Albania has been a member of NATO since 2009, and was accepted as an official candidate to join the European Union in 2014.

8. Clairvoyant SEER
We’ve been using the term “clairvoyant” to describe a psychic since the nineteenth century. Prior to that, a clairvoyant was a clear-sighted person. The term comes from French, with “clair” meaning “clear” and “voyant” meaning “seeing”.

10. For the birds? AVIAN
“Avis” is the Latin word for a bird, giving rise to our adjective “avian” meaning “relating to birds”.

11. Tour de France wheels RACING BIKE
Back in the late 1800s, long-distance cycle races were used as promotional events, traditionally to help boost sales of newspapers. These races usually took place around tracks, but in 1902 the backers of the struggling sports publication “L’Auto” decided to stage a race that would take the competitors all around France. That first Tour de France took place in 1903, starting in Paris and passing through Lyon, Marseilles, Bordeaux, Nantes and then back to Paris.

18. Bottom-row PC key ALT
The Alt (alternate) key is found on either side of the space bar on US PC keyboards. The Alt key evolved from what was called a Meta key on old MIT keyboards, although the function has changed somewhat over the years. Alt is equivalent in many ways to the Option key on a Mac keyboard, and indeed the letters “Alt” have been printed on most Mac keyboards starting in the nineties.

24. Thai language LAO
Lao, the language of Laos, does not use spaces between words (or periods!), although this is apparently changing. Spaces are used between sentences and clauses.

25. Mediterranean island republic CYPRUS
Cyprus is an island nation in the Mediterranean Sea, a member of the European Union. Cyprus is a divided island, with the Republic of Cyprus controlling about 60% of its area. The remaining 40% calls itself the Turkish Republic of Northern Cyprus, and is occupied by Turkish forces.

28. Philanthropist DONOR
Philanthropy is a concern for human welfare, and the act of donating to persons or groups who support such concerns. The term derives from the Greek “phil-” meaning “loving”, and “anthropos” meaning “mankind”.

29. 13th-century English friar/philosopher ROGER BACON
Roger Bacon was a Franciscan friar and English philosopher who lived in the 13th century. Bacon contributed a great deal to the advancement of science was one of the earliest advocates of the modern scientific method.

34. ‘Til Tuesday lead vocalist Mann AIMEE
Aimee Mann is a rock singer and guitarist from Virginia. Mann is married to Michael Penn, the brother of actor Sean Penn.

35. Decides not to dele STETS
“Stet” is a Latin word meaning “let it stand”. In editorial work, the typesetter is instructed to disregard any change previously marked by writing the word “stet” and then underscoring that change with a line of dots or dashes.

38. Tolkien beast ORC
Orcs are mythical humanoid creatures that appear in the writings of J. R. R. Tolkien. Since Tolkien’s use of orcs, they have also been featured in other fantasy fiction and in fantasy games.

41. Museum overseers CURATORS
The term “curator” is Latin and applies to a manager, guardian or overseer. In English, the original curators were the guardians and overseers of minors and those with mental disease.

43. All-Star Phillies catcher Carlos RUIZ
Carlos Ruiz is a professional baseball player from Panama who is one of only two MLB catchers to catch two no-hitters, the other being Jason Varitek.

49. Tiny life form AMEBA
An ameba (or “amoeba” as we spell it back in Ireland) is a single-celled microorganism. The name comes from the Greek “amoibe”, meaning change. The name is quite apt, as the cell changes shape readily as the ameba moves, eats and reproduces.

52. OPEC founding member IRAN
The Organization of the Petroleum Exporting Countries (OPEC) was founded in 1960 at a conference held in Baghdad, Iraq that was attended by Iraq, Kuwait, Iran, Saudi Arabia and Venezuela. Nine more countries joined the alliance soon after, and OPEC set up headquarters in Geneva, Switzerland and then Vienna, Austria in 1965. The basic aim of OPEC was to wrench control of oil prices from the oil companies and to put it in the hands of the sovereign states that own the natural resource.

57. Battery name prefix with “cell” DURA-
Duracell is a brand of batteries made today by Procter & Gamble. “Duracell” is a portmanteau of “durable” and “cell”.

58. “Jeopardy!” host Trebek ALEX
The word is that Alex Trebek will step down as host of the game show “Jeopardy” in 2016, when his current contract expires. The list of names mentioned to replace Trebek includes Brian Williams, Dan Patrick, Matt Lauer and Anderson Cooper. I vote for Cooper, but I can’t see him taking the job …

59. Gin flavoring SLOE
The sloe is the fruit of the blackthorn bush, and the main flavoring ingredient in sloe gin.

62. Belle of the ball DEB
Deb is short for “debutante”, which translates from French as “female beginner”.