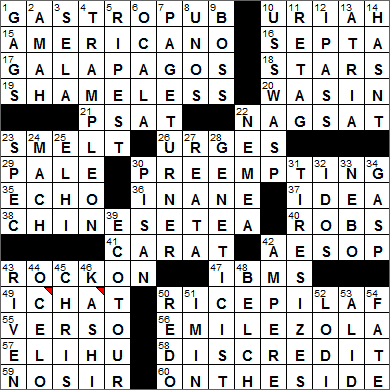 Today’s Wiki-est, Amazonian Googlies
Across
10. First husband of Bathsheba URIAH
Uriah the Hittite was a soldier mentioned in the Bible, a soldier in the army of King David. Uriah was married to Bathsheba with whom King David had an affair. David had Uriah killed and then took Bathsheba as his wife. Bathsheba and David became the parents of Solomon who succeeded David as king.

15. Drink with Campari and sweet vermouth AMERICANO
An Americano is a rather tasty cocktail made from Campari, sweet vermouth and club soda. The cocktail used to be known as the “Milano-Torino”, as Campari comes from Milano (Milan) and Cinzano vermouth comes from Torino (Turin). The origin of the “Americano” name is disputed. Some say that ‘Americano” is in honor of the drink’s popularity with Americans visiting Italy in the early 1900s. Others say that the name comes from the Italian “amaro” meaning “bitter”. Even though Ian Fleming’s spy is very much associated with a “vodka martini, shaken not stirred”, the first drink he ordered in the series of books was an Americano.

The most heavily used rapid transit systems in the US are:

17. Islands visited by Darwin GALAPAGOS
The Galápagos Islands lie over 500 miles west of Ecuador. The Galápagos owe their celebrity to the voyage of HMS Beagle which landed there in 1835, with Charles Darwin on board. It was Darwin’s study of various species on the islands that inspired him to postulate his Theory of Evolution.

23. Silver fish SMELT
Smelt is the name given to several types of small silvery fish, examples being Great Lake smelts and whitebait smelts.

In Greek mythology, Echo is one of the Oreads, the mountain nymphs. Echo fell in love with the vain Narcissus, and followed him into the forest one day. Narcissus heard her following him and called out, “Who’s there?”. Echo answered, “Who’s there?” Again he called out, and again Echo echoed his words back to him. Get the gist?

41. Stone measure CARAT
A carat is a unit of mass used in measuring gemstones, and is equal to 200 mg.

42. Storyteller from Thrace AESOP
Aesop is remembered today for his famous fables. Aesop lived in Ancient Greece, probably around the sixth century BC. Supposedly he was born a slave, somehow became a free man, but then met with a sorry end. Aesop was sent to the city of Delphi on a diplomatic mission but instead insulted the Delphians. He was tried on a trumped-up charge of stealing from a temple, sentenced to death and was thrown off a cliff.

Thrace is a historical and geographic region of southeast Europe, largely lying in southeastern Bulgaria. The region took its name from the Thracian people, an ancient race that used to inhabit the area. Included in the region is the European side of the city of Istanbul.

47. ThinkPads, e.g. IBMS
IBM introduced the ThinkPad in 1992, and the brand is still sold today, although no longer manufactured by IBM. IBM sold off its personal computer division in 2005 to Lenovo. A ThinkPad was used aboard the Space Shuttle Endeavor in 1993 on a mission focused on repairing the Hubble Telescope. The ThinkPad was being tested to see how it performed in space, given the high levels of radiation found in that environment. Now, there are about 100 (!) ThinkPads on board the International Space Station.

49. ooVoo alternative ICHAT
iChat was introduced in 2002, and is still in use today. It is Apple’s “instant messaging” application that integrates with the Mac Operating System.

ooVoo is a video chat and instant messaging application that competes directly with iChat and Skype.

55. Left-hand page VERSO
The left and right pages of a book or magazine are known in publishing circles as verso and recto. Recto comes from the Latin for “right”, and verso comes from the Latin word for “turned”. The idea is that the left side of the page is “turned” and is the reverse of the recto/right side.

56. Childhood friend of Paul Cézanne EMILE ZOLA
The most famous work of French writer Émile Zola is his 1898 open letter “J’Accuse!” written to then French president Félix Faure. The letter was published on the front page of a leading Paris newspaper, and accused the government of anti-Semitism in its handling of the trial of Captain Alfred Dreyfus. Dreyfus was a Jewish military officer in the French army, falsely accused and convicted of spying for Germany. Even after the error was discovered, the government refused to back down and let Dreyfus rot away on Devil’s Island rather than admit to the mistake. It wasn’t until 1906, 12 years after the wrongful conviction, that Dreyfus was freed and reinstated, largely due to the advocacy of Emile Zola.

Paul Cézanne was a Post-Impressionist artist who was born and worked in the beautiful city of Aix-en-Provence in the South of France. Cézanne has the reputation of being the artist who bridged the late 19th century Impressionist movement with the early 20th century Cubist movement. Both Henri Matisse and Pablo Picasso are quoted as saying that Cézanne “is the father of us all”.

57. Secretary of war under Teddy ELIHU
Elihu Root was an American statesman, winner of the Nobel Peace Prize in 1912 for his diplomatic work that brought “nations together through arbitration and cooperation”. Root served as Secretary of State under President Theodore Roosevelt.

60. How fries are usually served ON THE SIDE
“French fries” are called “chips” back in the British Isles where I grew up. In France, they’re called “pommes frites” (“fried potatoes”).

Down
2. Asian nurse AMAH
“Amah” is an interesting word in that we associate it so much with Asian culture and yet it actually comes from the Portuguese “ama” meaning “nurse”. Ama was imported into English in the days of the British Raj in India when a wet-nurse became known as an amah.

3. Ward of “Gone Girl” SELA
The actress Sela Ward turns up in crosswords a lot. Ward played Teddy Reed in the TV show “Sisters” in the nineties, and was in “Once and Again” from 1999-2002. I don’t know either show, but I do know Ward from the medical drama “House” in which she played the hospital’s lawyer and Greg House’s ex-partner. That was a fun role, I thought. More recently Ward played a lead role on “CSI: NY” and was a very welcome and much-needed addition to the cast …

“Gone Girl” is a thriller novel written by Gillian Flynn that was first published in 2012. The story tells of a man whose wife has disappeared, with the reader not being certain if the husband is involved in the disappearance. The book was adapted into a movie of the same name released in 2014, starring Ben Affleck and Rosamund Pike.

6. College of Central Florida city OCALA
The city of Ocala, Florida was founded near a historic village with the same name. In the local Timucua language “Ocala” means “Big Hammock”. Back in the 1890s, Ocala was famous for its oranges, with over one third of that fruit shipped from Florida coming from the city. Also, thoroughbred horse farming in Florida started in Ocala, back in 1943. Some folks today call Ocala the “Horse Capital of the World”, but I bet that’s disputed by others …

8. Some, in Seville UNOS
The city of Seville is the capital of Andalusia in southern Spain. Seville is a favored setting for many operas including “The Barber of Seville” by Rossini, “Fidelio” by Beethoven and Mozart’s “Don Giovanni” and “The Marriage of Figaro”.

24. Eponymous physicist Ernst __ MACH
The Mach number of a moving object (like say an airplane) is it’s speed relative to the speed of sound. A plane travelling at Mach 2, for example, is moving at twice the speed of sound. The term “Mach” takes its name from the Austrian physicist Ernst Mach who published a groundbreaking paper in 1877 that even predicted the “sonic boom”.

25. K thru 12 ELHI
“Elhi” is an informal word used to describe anything related to schooling from grades 1 through 12, i.e. elementary through high school.

27. Calf snagger REATA
“Reata” is the Spanish word for “lasso”. We tend to use the spelling “riata” in English, but sometimes can use the original Spanish word.

28. James Watson, notably GENETICIST
Francis Crick and James Watson discovered that DNA had a double-helix, chain-like structure, and published their results in Cambridge in 1953. To this day the discovery is mired in controversy, as some crucial results collected by fellow researcher Rosalind Franklin were used without her permission or even knowledge.

30. Resident on the Arno PISAN
The city of Pisa is right on the Italian coast, sitting at the mouth of the River Arno, and is famous for its Leaning Tower. The tower is actually the campanile (bell tower) of the city’s cathedral, and it has been leaning since it was completed in 1173. Just shows you how important good foundations are …

33. Mount from which Moses saw the Promised Land NEBO
Mount Nebo is an elevated spot in Jordan that is mentioned in the Bible. According to the Book of Deuteronomy, Moses climbed Mount Nebo from the plains of Moab in order to see the Promised Land, the Land of Israel that he was destined never to enter. According to Christian and some Islamic traditions, Moses was buried on Mount Nebo.

42. Unit in Ohm’s Law AMPERE
The unit of electric current is the ampere, abbreviated correctly to “A” rather than “amp”. It is named after French physicist André-Marie Ampère, one of the main scientists responsible for the discovery of electromagnetism.

44. 3M sponge brand O-CEL-O
“o-cel-o” is a brand of kitchen sponge was introduced in 1947, and is made today by 3M. The “o-cel-o” name comes from chemical components used in the product’s manufacture, i.e. oxygen-cellulose-oxygen.

46. GOLEAN cereal maker KASHI
Kashi is a food company that primarily produces breakfast cereals. Founded in 1984, the name “Kashi” is a melding of “kashruth” (i.e. kosher), and “Kushi”. Michio Kushi helped to introduce the macrobiotic diet to the US in the fifties.

52. Lombardy city LODI
Lodi is a city in Lombardy in the north of Italy. The inhabitants of Lodi are known as Lodigiani.