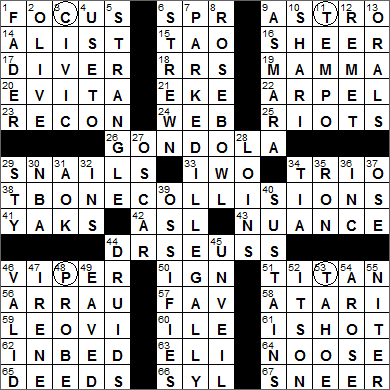 CROSSWORD SETTER: Bruce Haight
THEME: T-Bone Collisions … we have eight models of car in today’s grid, with pairs of them COLLIDING in T-BONE fashion at the circled squares:

38A. Car mishaps that occur at this puzzle’s four circles T-BONE COLLISIONS

9. Minute Maid Park player (Chevy) ASTRO
Enron Field, as it was known, is a retractable-roof ballpark that was built next to Houston’s old Union Station. Enron paid $100 million to get its name on the field, and then when the world found out what a scam Enron actually was, the Astros bought back the contract for the name, for a mere $2.1 million. The stadium became Astros Field for a few months, until the Coke people paid $170 million for a 28-year contract to christen the stadium Minute Maid Park. A good deal for the Astros, I’d say.

The Chevrolet Astro is a minivan that GM made from 1985 to 2005. The same vehicle was also sold as the GMC Safari.

15. Eastern ideal TAO
The Chinese character “tao” translates as “path”, but the concept of Tao signifies the true nature of the world.

18. Symmetrically placed Monopoly sqs. RRS
The four railroad properties in the Monopoly board game are:

20. Musical narrated by Che EVITA
“Evita” was the followup musical to “Jesus Christ Superstar” for Andrew Lloyd Weber and Time Rice. Both of these works were originally released as album musicals, and very successful ones at that (I remember buying them when they first came out). For the original album’s cast they chose Irish singer Colm Wilkinson (or C. T. Wilkinson, as we know him back in Ireland) to play “Che”, the narrator of the piece.

21. Squeeze (out) EKE
To “eke out” means to “make something go further or last longer”. For example, you could eke out your income by cutting back on expenses.

22. Cosmetician Adrien ARPEL
The Adrien Arpel cosmetic company was founded in 1962 and sold its products across Europe. The company started selling in the US in 1968.

26. Way up the mountain GONDOLA
The word “gondola” was originally limited to the famous boats that travel along the canals of Venice. When man started to fly through the air in hot air balloons, “gondola” was used for the basket in which the passenger(s) traveled. By extension, the structure carrying passengers and crew under an airship is also called a gondola, as are the cars suspended from a cable at a ski resort.

29. Slowpokes SNAILS
Back in the early 1800s, a “poke” was a device attached to domestic animals such as pigs or sheep to keep them from escaping their enclosures. The poke was like a yoke with a pole, and slowed the animal down, hence the term “slowpoke”.

33. 1945 battle setting, familiarly IWO
Iwo Jima is a volcanic island located south of Tokyo that today is uninhabited. The name is Japanese for “Sulfur Island”, referring to the sulfur mining on which Iwo Jima’s economy once depended. There were about a thousand Japanese civilians living on the island prior to WWII. In 1944, there was a massive influx of Japanese military personnel in anticipation of the inevitable US invasion. As the Japanese military moved in, the civilians were forced out and no one has lived there since.

34. “Macbeth” witches, e.g. TRIO
As the three witches in Shakespeare’s “Macbeth” are boiling up their evil brew, they call out all the exotic ingredients. Stirring away they also repeat several times the famous lines:

38. Car mishaps that occur at this puzzle’s four circles T-BONE COLLISIONS
A broadside collision between two cars is also known as a right-angle or t-bone collision. The side of one vehicle is impacted by the front of another, often leaving the vehicles locked in a T-formation.

42. Lip-reading alternative: Abbr. ASL
It’s really quite unfortunate that American Sign Language (ASL) and British Sign Language (BSL) are very different, and someone who has learned to sign in one cannot understand someone signing in the other.

44. Writer who used his actual middle name as a pen name DR SEUSS
Dr. Seuss was the pen name of Theodor Seuss Geisel. He first used the pen name while studying at Dartmouth College and at the University of Oxford. Back then, Geisel pronounced “Seuss” as it would be in German, i.e. rhyming with “voice”. After his books found success in the US, he went with the pronunciation being used widely by the public, quite happy to have a name that rhymed with “Mother Goose”.

46. Venomous snake (Dodge) VIPER
The Dodge Viper is an American sports car with a V-10 engine. The Viper was introduced in 1991, and is still in production today.

50. Place for a key: Abbr. IGN
The first ignition key was introduced by Chrysler back in 1949. Prior to the use of ignition keys, vehicles had both an ignition on/off switch and a starter button.

51. Atlas, for one (Nissan) TITAN
In Greek mythology, Atlas was a Titan who was tasked with holding up the celestial sphere on his shoulders. The Greeks observed the planets moving and the stars in fixed positions. They believed that the stars were on the surface of a single starry sphere, the celestial sphere that was supported by Atlas.

The Titan is a pickup truck manufactured in the US by Nissan for the North American market. The first Nissan Titans rolled off the production line in 2003.

56. Pianist known for his Beethoven interpretations ARRAU
Claudio Arrau was a greatly respected Chilean pianist who performed for much of the twentieth century until his death in 1991. Arrau left Chile to study in Germany where he lived for many years, having married a German opera singer. During WWII, Arrau and his family left Germany and settled in New York City.

59. Pope after John X LEO VI
Pope Leo VI was in office for just 9 months, spanning the years 928 and 929. Leo VI apparently wasn’t his own man, and fell under the control of a wealthy Roman noblewoman called Marozia. Marozia had allegedly been the mistress of Pope Sergius III, had ordered the imprisonment and death of Pope John X, then making Leo VI head of the Roman Catholic church.

60. Seine sight ILE
There are two famous “îles” (islands) in the middle of the River Seine in Paris, one being the Île de la Cité, and the other Île Saint-Louis. Île de la Cité is the most renowned of the two, as it is home to the cathedral of Notre Dame.

63. Yalie ELI
Eli is the nickname for a graduate of Yale University, a term used in honor of the Yale benefactor Elihu Yale.

65. Monopoly stack DEEDS
The commercial game of Monopoly is supposedly a remake of “The Landlord’s Game” created in 1903 by a Quaker woman called Lizzie Phillips. Phillips used her game as a tool to explain the single tax theory of American economist Henry George. The Landlord’s Game was first produced commercially in 1924. The incredibly successful derivative game called Monopoly was introduced in 1933 by Charles Darrow, who became a very rich man when Parker Brothers bought the rights to the game just two years later in 1935.

Down
1. Sound mixing control FADER
A fader is a knob (more usually a slider) that gradually increases or decreases the level of an audio signal. You’ll often see audio engineers at a performance or in a recording studio sliding buttons up and down. Those are faders.

3. Type of pride (Honda) CIVIC
Introduced in 1972, the Honda Civic is the second-oldest brand of Japanese car made for the US today (only the Toyota Corolla has been around longer). Today’s Civic is a compact car, but the original was smaller, and classed as a sub-compact. The first design had a transverse-mounted engine and front-wheel drive to save on space, copying the configuration introduced with the British Mini.

8. NCAA’s “Granddaddy of them all” ROSE BOWL
The oldest of all the bowl games is the Rose Bowl and so has the nickname “The Granddaddy of Them All”. The first Rose Bowl game was played in 1902.

9. Capital of Eritrea ASMARA
Eritrea is a country located in the Horn of Africa, surrounded by Sudan, Ethiopia, Djibouti and the Red Sea. Some scientists believe that the area now known as Eritrea was the departure point for the anatomically modern humans who first left Africa to populate the rest of the world.

10. Lewis with Lamb Chop SHARI
Shari Lewis was the original puppeteer behind the PBS children’s show “Lamb Chop”. After Shari Lewis died in 1998, her daughter Mallory took over the role of puppeteer on the show.

11. Beat (Ford) TEMPO
Ford produced the Tempo from 1984 until 1994, and also sold it as the Mercury Topaz. We knew it as the Ford Ghia over in Europe.

27. Prize for a picture OSCAR
The Academy of Motion Picture Arts and Sciences (AMPAS) is the organization that gives the annual Academy Awards also known as the “Oscars”. The root of the name “Oscar” is hotly debated, but what is agreed is that the award was officially named “Oscar” in 1939. The first Academy Awards were presented at a brunch in 1929 with an audience of just 29 people. The Awards ceremony is a slightly bigger event these days …

29. Rooting place STY
The verb “to root” can be used for a pig’s action with the snout, turning objects over.

30. Larry O’Brien Trophy org. NBA
The NBA’s Larry O’Brien Championship Trophy is named for a former commissioner of the NBA. Prior to working with the NBA, O’Brien had been Postmaster General in President Lyndon Johnson’s cabinet.

31. “Fine with me!” A-OK!
Our term “A-OK” is supposedly an abbreviation for “A(ll systems are) OK”, and arose in the sixties during the Space Program.

A “cohort” can be used as a collective noun, meaning a group or company. The term can also apply to a company or associate. The term comes from the Latin “cohors”, which was an infantry company in the Roman army, one tenth of a legion.

47. Adler of Sherlock Holmes lore IRENE
The character Irene Adler only appeared in one of the Sherlock Holmes stories by Sir Arthur Conan Doyle. In that story, “A Scandal in Bohemia”, Holmes expresses remarkable admiration for Adler as a woman and as a foe. As a result, derivative works in the Holmes genre often feature Adler as something of a romantic interest for Sherlock.

48. Space explorer (Ford) PROBE
The Probe is a sports compact made by Ford from 1989 until 1997. The Probe was actually based on a Japanese design, the Mazda G-platform.

53. Western skiing mecca (Chevy) TAHOE
Lake Tahoe is up in the Sierra Nevada mountains, right on the border between California and Nevada. Lake Tahoe is the largest alpine lake in the country, and the largest lake in general, behind the five Great Lakes. It’s also the second deepest lake, with only the beautiful Crater Lake in Oregon being deeper. Given its location, there are tall casinos that sit right on the shore on the Nevada side of the state line where gambling is legal. Tahoe is home to several downhill skiing resorts, including Heavenly Mountain (the largest ski area in California and Nevada) and Squaw Valley (host of the 1960 Winter Olympics).

55. Gunpowder ingredient NITER
The chemical name for saltpeter (also called “niter”) is potassium nitrate. The exact origin of the name “saltpeter” isn’t clear, but it may have come from the Latin “sal petrae” meaning “stone salt”. The main use for potassium nitrate is as a fertilizer, as a source of potassium and nitrogen. As it is a powerful oxidizing agent, it is also used in amateur rocket propellants. Anyone who has ignited one of those “engines” would have noticed the lilac-colored flame, indicating the presence of potassium.

Gunpowder is the earliest known explosive chemical. Also called “black powder”, it is a mixture of sulfur, charcoal and saltpeter (i.e. potassium nitrate). The saltpeter is a powerful oxidizing agent, providing the oxygen to burn the sulfur and charcoal, which acts as the fuel in the mixture. Gunpowder was invented by the chinese in 8th century.