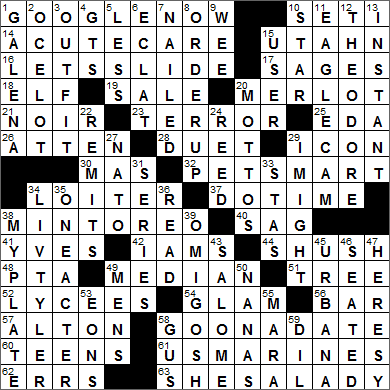 Today’s Wiki-est, Amazonian Googlies
Across
1. Siri counterpart GOOGLE NOW
Google’s personal assistant is known as “Google Now”. It is a direct competitor of Apple’s Siri and Microsoft’s Cortana. I think Google Now wins out over the other digital personal assistants, as it makes better use of information that Google has already collected about the user. I suppose there’s good and bad in that regard …

10. Inst. with a weekly “Big Picture Science” radio program SETI
SETI is the name given to a number of projects that are searching for extraterrestrial life. The acronym stands for “search for extraterrestrial intelligence”. One of the main SETI activities is the monitoring of electromagnetic radiation (such as radio waves) reaching the Earth in the hope of finding a transmission from a civilization in another world.

15. Demonym that may have a second “a” UTAHN
A Utahn or Utahan is someone from Utah.

A demonym is a term used for natives of a geographical location, with that term being derived from the name of that particular location. For example the Irish come from Ireland, and the Americans come from America.

18. One of the Noldor, in Tolkien ELF
In Tolkien’s Middle Earth, the Noldor are elves who live in Eldamar.

20. Kind of red MERLOT
Merlot is one of the main grapes used to make Bordeaux wines, along with Cabernet Sauvignon, Cabernet Franc and Petit Verdot.

25. Child expert LeShan EDA
Eda LeShan wrote “When Your Child Drives You Crazy”, and was host of the PBS television show “How Do Your Children Grow?”

29. Dropbox’s blue box, for one ICON
Dropbox is a big name in the world of cloud data storage.

Rafael “Rafa” Nadal is a Spanish tennis player, noted for his expertise on clay courts, earning him the nickname “The King of Clay”.

32. Chain with day care PETSMART
PetSmart is a chain of retail facilities offering supplies and services for pets. The chain opened in 1987 as the PetFood Warehouse. Services offered include grooming, dog training, boarding and day care.

34. Lollygag LOITER
To lollygag (also “lallygag”) is to dawdle, to dally.

41. First name in couture YVES
Yves Saint-Laurent (YSL) was a French fashion designer, actually born in Algeria. Saint-Laurent started off working as an assistant to Christian Dior at the age of 17. Dior died just four years later, and as a very young man Saint-Laurent was named head of the House of Dior. However, in 1950 Saint-Laurent was conscripted into the French Army and ended up in a military hospital after suffering a mental breakdown from the hazing inflicted on him by his fellow soldiers. His treatment included electroshock therapy and administration of sedatives and psychoactive drugs. He was eventually released from the army, managed to pull his life back together and started his own fashion house. A remarkable story …

42. Brand at 32-Across IAMS
Iams dog food was produced by the animal nutritionist Paul Iams. He felt that household pets were suffering somewhat by being fed a diet of table scraps, so he developed a dry dog food that he felt was more nutritious and suitable for pet dogs. He founded the Iams company, now part of Procter & Gamble, in 1946.

52. Schools abroad LYCEES
Attending is the “lycée” is the last stage of secondary education in France.

54. Genre of the late David Bowie GLAM
David Bowie was the stage name of English singer David Jones. Bowie adopted the alter ego Ziggy Stardust during his glam rock phase in the 1970s. Sadly, Bowie passed away from liver cancer in early 2016.

56. Dove shape BAR
The Dove Bar is an ice cream bar that was distributed locally in Chicago from 1956 until 1985, when Mars purchased the brand and made it available nationally.

“Iron Chef” is a Japanese cooking show that has been broadcast since 1993. The original Japanese show was dubbed for airing in English-speaking countries and became a surprising hit around the world. There are now spin-off shows around the world including “Iron Chef America” and “Iron Chef UK”.

60. Hunger Games competitors TEENS
“The Hunger Games” is a 2008 novel by Suzanne Collins, the first in a trilogy of titles that also includes “Catching Fire” (2009) and “Mockingjay” (2010). “The Hunger Games” was adapted into a very successful movie released in 2012, with the sequels following soon after. Amazon.com reports more sales of “The Hunger Games” series books than even the “Harry Potter” series.

61. “We don’t promise you a rose garden” sloganeer US MARINES
The US Marines used a recruitment poster in the seventies and eighties that showed a drill instructor with his stern-looking face just inches away from the face of a recruit, and the words “We don’t promise you a rose garden” written underneath. The photo features Marine Sergeant and drill instructor Chuck Taliano, and was taken just a few weeks before Taliano was released from active duty in 1968.

63. Tom Jones hit written by Paul Anka SHE’S A LADY
“She’s a Lady” is a 1971 song composed by Paul Anka and released by Tom Jones.

Tom Jones, now he has a real voice and is a great showman. I saw him in Las Vegas many, many moons ago, one of the best Vegas shows I’ve ever attended. Although Tom Jones is a carefully selected stage name (he was born Thomas Woodward) the name isn’t too far from reality as Jones is his mother’s maiden name. The stage name was chosen by his manager to capitalize on the appeal of “Tom Jones”, a filmed version of the Henry Fielding novel that was having a successful run at the time. The name also emphasized Tom’s Welsh roots, as Jones is a very common name in Wales.

Down
1. Lead source GALENA
Galena is the most commonly used mineral to produce lead. It is a form of lead sulfide. Galena is the state mineral of Missouri and of Wisconsin.

2. Spotted cat OCELOT
The ocelot is found mainly in South and Central America, although there have been sightings as far north as Arkansas. An ocelot doesn’t look too different from a domestic cat, and some have been kept as pets. Perhaps most famously, Salvador Dali had one that he carried around everywhere with him.

4. Alfa Romeo sports cars GTS
The “Alfa” in Alfa Romeo is actually an acronym, standing for Anonima Lombarda Fabbrica Automobili (“Lombard Automobile Factory, Public Company”). ALFA was an enterprise founded in 1909 and which was taken over by Nicola Romeo in 1915. In 1920 the company name was changed to Alfa Romeo.

5. More, to minimalists LESS
I regard myself as a minimalist, despite the volume of drivel that I produce in this blog each day. More is less …

6. Flash ECLAT
“Éclat” can mean a brilliant show of success, or the applause or accolade that one receives. The word derives from the French “éclater” meaning “to splinter, burst out”.

10. Heineken logo feature STAR
The label on a bottle of Heineken beer includes a red star logo. The red star was a symbol used by European brewers in the Middle Ages. During the Cold War, the red star came to have a negative connotation, an association with communism. So for several years, Heineken used a white star with a red outline as a logo.

15. Tweeter, say USER
I have never tweeted in my life, and have no immediate plans to do so (but one should never say “never”). Twitter is a microblogging service that limits any post sent to just 140 characters. In a sense, it is similar to this blog. Here I send out a post once a day containing information that I think might be useful to folks (thank you for reading!). I don’t think I could send out much of interest using just 140 characters.

31. Soap, for example SERIES
The original soap operas were radio dramas back in the fifties. Given the structure of society back then, the daytime broadcasts were aimed at housewives working in the home. For some reason the sponsors of those radio shows, and the television shows that followed, were soap manufacturers like Procter & Gamble, Colgate-Palmolive and Lever Brothers. And that’s how the “soap” opera got its name …

35. Albee’s “The Goat, or Who Is Sylvia?,” e.g. ONE-ACTER
“The Goat, or Who Is Sylvia?” is a play by Edward Albee that was first performed in 2002, on Broadway. The rather incongruous title refers to a goat with whom the hero of the piece falls in love. “Who is Sylvia?” is the name of a song from William Shakespeare’s play “The Two Gentlemen of Verona”.

36. Enjoy The Atlantic READ
“The Atlantic” magazine was founded in 1857 in Boston as “The Atlantic Monthly”. The impressive list of founding sponsors of included Ralph Waldo Emerson, Oliver Wendell Holmes, Henry Wadsworth Longfellow and Harriet Beecher Stowe. I guess double-barreled names were all the go back then …

38. Government nutrition guide MYPLATE
The first food guide pyramid was issued in 1974, in Sweden. The food pyramid that we’re most familiar with in this country is the one published by the US Department of Agriculture (USDA) in 1992, which was replaced in 2011. Instead of a pyramid, we now have a guide called MyPlate (available on the website ChooseMyPlate.gov). MyPlate urges us to eat about 30% grains, 30% vegetables, 20% fruits, 20% proteins on our plates, accompanied by a small serving of dairy.

43. Wilde tragedy SALOME
“Salomé” is an 1891 play by Irishman Oscar Wilde that he originally wrote in French. It tells the biblical story of Salome who requested the head of John the Baptist in return for performing the dance of the seven veils. Wilde’s work was adapted by Richard Strauss into an opera of the same name that was premiered in Dresden in 1905.

45. Roger Ebert’s Illinois birthplace URBANA
Urbana is an Illinois city that is home to most of the campus of the University of Illinois. The city was named in 1833 after Urbana, Ohio, the hometown of State Senator John Vance who provided the names for both the surrounding county of Champaign and the county’s seat of justice, Urbana.

47. Reason for Luther’s excommunication HERESY
The branch of Protestant Christianity known as Lutheranism has its roots in the 1521 Diet of Worms. The Diet of Worms was a meeting of the Imperial States of the Holy Roman Empire that took place in the small town of Worms on the Rhine River in Germany. The main item on the agenda was discussion off the the 95 theses of Martin Luther. Luther was summoned to the meeting, and found to be guilty of heresy.

49. Target section MEN’S
Target Corporation was founded by George Draper Dayton in 1902 in Minneapolis, Minnesota as Dayton Dry Goods Company. Dayton developed into a department store, and the company opened up a discount store chain in 1962, calling it Target. Today Target is the second-largest discount retailer in the country, after Walmart.

55. “The Social Network” actress Rooney __ MARA
The actress Rooney Mara is noted for her role in the 2010 film “The Social Network” and more recently for the title role in the 2011 hit movie “The Girl with the Dragon Tattoo”. Mara has American Football in her blood. Her mother’s family founded the Pittsburgh Steelers and her father’s family founded the New York Giants.

If you’ve seen the 2010 movie “The Social Network”, you’ll know about the turmoil that surrounded the launch of the website Facebook. The company’s co-founders are Mark Zuckerberg (played by Jesse Eisenberg) and Eduardo Saverin (Andrew Garfield). The way things are portrayed in the movie, Saverin was poorly treated by Zuckerberg after the “sharks” moved in, i.e. the professional investors. Supposedly Saverin’s stock position in the company was diluted “without his knowledge” from 34% to about 5%, to the benefit of the remaining investors.

58. Gloomy one GUS
The original “Gloomy Gus” was a pessimistic character in newspaper comics in the early 1900s, introduced by illustrator Frederick Burr.