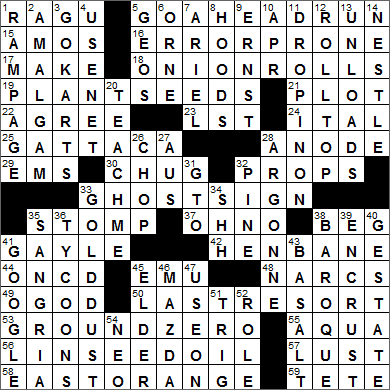 Today’s Wiki-est, Amazonian Googlies
Across
1. R&B Foods brand since 2014 RAGU
The Ragú brand of pasta sauce is owned by Unilever. The name ” Ragù” is the Italian word for a sauce used to dress pasta, however the spelling is off a little. In Italian the word is “Ragù” with a grave accent over the “u”, but if you look at a jar of the sauce on the supermarket shelf it is spelled “Ragú” on the label, with an acute accent. Sometimes I think we just don’t try …

5. Potential diamond winner GO-AHEAD RUN
A “go-ahead run” in baseball is a run or potential run that would give the lead to the batting team.

15. Old Testament book AMOS
Amos is one of the twelve minor prophets in the Hebrew Bible.

17. Prepare for a meal MAKE
I guess one makes a dish in preparation for a meal …

19. Burpee product PLANT SEEDS
The Burpee Seeds company was formed in 1876 by Washington Atlee Burpee (what a name!).

23. D-Day transport LST
LST stands for Landing Ship, Tank. LSTs were the large vessels used mainly in WWII that had doors at either ends through which tanks and other vehicles could roll off and onto beaches. The design concept persists to this day in the huge fleet of commercial roll-on/roll-off car ferries, all inspired by the LST.

24. Indicator of stress: Abbr. ITAL
Italic type leans to the right. The style is known as “italic” because the stylized calligraphic form of writing originated in Italy, probably in the Vatican.

25. 1997 Hawke/Thurman sci-fi film GATTACA
“Gattaca” is a science fiction movie starring Ethan Hawke and Uma Thurman that was released in 1997. Set in the not-too-distant future, the film describes a society in which potential children are preselected so that they inherit the most desirable traits from their parents. The title “Gattaca” is the space agency featured in the storyline. I haven’t seen this movie, but it’s on my “must see” list …

28. Cell terminal ANODE
A battery is a device that converts chemical energy into electric energy. A simple battery is made up of three parts: a cathode, an anode and a liquid electrolyte. Ions from the electrolyte react chemically with the material in the anode producing a compound and releasing electrons. At the same time, the electrolyte reacts with the material in the cathode, absorbing electrons and producing a different chemical compound. In this way, there is a buildup of electrons at the anode and a deficit of electrons at the cathode. When a connection (wire, say) is made between the cathode and anode, electrons flow through the resulting circuit from the anode to cathode in an attempt to rectify the electron imbalance.

29. Hummingbird’s pair? EMS
There are a pair of letters M (ems) in the word “hummingbird”.

Our word “kudos” means acclaim given for an exceptional achievement. “Kudos” is not a plural, despite a common misapprehension. It is a singular noun derived from the Greek “kyddos” meaning “glory, fame”.

33. Old, fading ad on a building GHOST SIGN
A “ghost sign” is a old, hand-painted advertisement, usually found on a brick building. The ghost sign might have been preserved out of a sense of nostalgia, or just left on a building wall that has not been refurbished since the creation of the original sign.

35. Jazz dance STOMP
A “stomp” is a jazz composition with a driving rhythm and a fast tempo.

37. “Aaugh!” OH NO!
The exclamation of dismay “Aaugh!” is particularly associated with Carlie Brown and his cohorts in the “Peanuts” cartoon strip.

41. Crystal of country GAYLE
Country singer Crystal Gayle is perhaps best known for her 1977 hit song “Don’t It Make My Brown eyes Blue”. She is also well known for the length of hair, which almost reaches the ground as she is standing. Another claim to fame for Ms. Gayle is that she is the younger sister of fellow singer Loretta Lynn.

42. Poisonous plant in the nightshade family HENBANE
Henbane is a toxic plant that has been used historically in poisonous, anesthetic and psychoactive potions.

45. Low-fat meat source EMU
Even though emu meat is classified as a red meat because of its color, it has a fat content that is comparable to other poultry.

48. Busters NARCS
“Narc” is a slang term for a law enforcement officer who tracks down criminals associated with illegal drugs. “Narc” is short for “narcotics”.

55. Cyan relative AQUA
The color known as “aqua” is a light greenish blue.

56. Putty base LINSEED OIL
Linseed oil is also known as flaxseed oil, as the oil is extracted from the dried seeds of the flax plant.

58. Newark neighbor EAST ORANGE
East Orange, New Jersey is a suburb of Newark. The list of famous former residents includes Whitney Houston (as a girl) and Janis Ian (also as a girl).

“Noodle” and “bean” are slang terms for the head.

Nantes is a beautiful city located on the delta of the Loire, Erdre and Sèvre rivers. It has the well deserved nickname of “The Venice of the West”. I had the privilege of visiting Nantes a couple of times on business, and I can attest that it really is a charming city.

Down
2. Mixture AMALGAM
Amalgam is an alloy of mercury with some other metal. Many dental fillings are made of an amalgam of silver and mercury.

4. Online discussion venue USENET
Remember the good old days, when you read messages online in “newsgroups”? Well, that system of aggregating public messages is known as Usenet, and it’s still around today. Usenet started operating in 1980, some ten years before the World Wide Web was introduced (which system has displaced Usenet in terms of popularity). Usenet definitely played a significant part in the history of the Internet. For instance, the terms “FAQ” and “spam” were both born on Usenet.

5. Storms of the ’90s GEOS
Geos were small vehicles manufactured by General Motors, mainly in the nineties. Geos were designed to compete head-to-head with the small imports that were gaining market share at the time in the US. Some Geo models that you might remember are the Metro, the Prizm and the Storm. The cars were actually built as joint-ventures with Japanese manufacturers. The Prizm was a GM/Toyota project, the Metro was GM/Suzuki, and the Storm was GM/Isuzu.

6. Alençon’s department ORNE
Alençon is a commune in Normandy in northern France, and is the capital of the Orne department. In the 17th century it was renowned for lace production, lace that went by the name of “point d’Alençon”.

7. Fourth-largest moon of Uranus ARIEL
All of the twenty-seven moons of the planet Uranus are named for characters from literature, characters created by William Shakespeare and Alexander Pope. The five major moons are so large that they would be considered planets in their own right if they were orbiting the sun directly. The names of these five moons are:

8. Range protectors HOODS
Those would be ranges in a kitchen.

9. Physicist Mach ERNST
The Mach number of a moving object (like say an airplane) is its speed relative to the speed of sound. A plane travelling at Mach 2, for example, is moving at twice the speed of sound. The term “Mach” takes its name from the Austrian physicist Ernst Mach who published a groundbreaking paper in 1877 that even predicted the “sonic boom”.

10. Diamond birthstone mo. APR
Here is the “official” list of birthstones by month, that we tend to use today:

12. Antique shop furniture item ROLLTOP
A rolltop desk is one with a sliding cover made of wooden slats. The slat mechanism is also known as a “tambour”.

27. It borders It. AUS
The name “Austria” is a Latin variant of the German name for the country, “Österreich”. “Österreich” itself means “Eastern borderlands”, a reference to the country’s history as a prefecture of neighboring Bavaria to the west.

28. French battle site in WWI ARGONNE
The Meuse-Argonne Offensive (also called the Battle of the Argonne Forest) was an Allied offensive along the entire western front that took place in the last few weeks of WWI. Fought by US and French forces against the Germans, the offensive was the biggest operation launched by the American Expeditionary Force in WWI. The Meuse-Argonne was the deadliest battle in US history, as 26,277 US soldiers lost their lives.

34. Proctor’s warning SHH!
A “proctor” is a supervisor, especially of an examination in a school, or perhaps of a dormitory. The word “proctor” originated in the late 1500s, a contraction of the word “procurator”, the name given to an official agent of a church.

35. Wine-and-fruit beverage SANGRIA
Sangria is red wine punch, usually associated with Portugal and Spain. Recipes for sangria vary, but almost all include a robust red wine, sliced fruit, something sweet (e.g. orange juice, sugar), a spirit (e.g. brandy, triple sec), carbonated water or perhaps 7up, and ice. The drink is named for its color, as “sangre” is the Spanish for blood.

38. Bernini’s genre BAROQUE
Something described as “baroque” is extremely ornate and convoluted. The term comes from the Baroque Period, in which many of the arts focused on great detail and elaborate design.

Gian Lorenzo Bernini was an Italian sculptor and architect, generally regarded as the successor to Michelangelo. Bernini’s most famous work perhaps is the design for the Piazza San Pietro (Saint Peter’s Square) located in front of Saint Peter’s Basilica in Rome.

43. Volcanic rock BASALT
Basalt is a volcanic rock that is created when lava cools rapidly at the earth’s surface.

46. Tribute maker MAZDA
The Mazda Tribute is a small SUV that Mazda developed jointly with Ford.

54. Hero in a virtual reality film trilogy NEO
Neo is the character played by Keanu Reeves in “The Matrix” series of films.