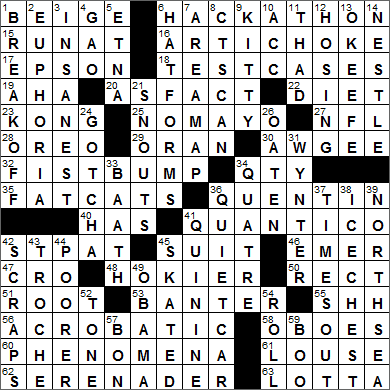 Today’s Wiki-est, Amazonian Googlies
Across
6. Software developers’ get-together HACKATHON
A “hackathon” is an event in which software developers collaborate intensively on a project, usually for a day or a week. It is a “hack marathon”, with “hack” in this case being legal, explorative programming. Apparently, the first event described as a hackathon was held by ten American developers who met in Calgary to work on cryptographic software. Calgary was chosen so as to avoid US export regulations relating to software.

17. Brother competitor EPSON
Seiko Epson is a Japanese company, one of the largest manufacturers of printers in the world. The company has its roots in the watch business, roots that go back to 1942. Seiko was chosen as the official timekeeper for the 1964 Summer Olympics in Tokyo and was asked to supply a timer that produced a printed record. This request brought Seiko into the business of printer production. The company developed the world’s first mini-printer for the 1964 Games and called it EP-101 (EP standing for Electronic Printer). In 1975 Seiko introduced the next generation of EP printers which was called EPSON, from “SON of EP”. Cute, huh?

Brother is a Japanese company that is perhaps best known in North America for producing typewriters and printers. Brother started out as a manufacturer of sewing machines in in Nagoya, Japan in 1908.

28. Dairy Queen Blizzard option OREO
Soft serve ice cream was developed by John McCullough in 1938. McCullough was able to get his new dessert carried by a local ice cream store in Illinois. He and the store owner became so swamped with sales that they opened a store specifically built around the product in Joliet, Illinois, hence creating the first Dairy Queen outlet. There are now over 5,700 Dairy Queen franchises in 19 countries. We’ve even got one in Ireland …

29. City between Algiers and Casablanca ORAN
Oran lies on the Algerian coast, and is famous for being the port where the French Navy was largely destroyed by the British during WWII in order to avoid the French vessels falling into the hands of Nazi Germany after France surrendered. This decisive and unexpected unilateral action by the British sent a very strong message around the world that Britain was willing to fight alone against the axis powers if necessary.

32. Handshake relative FIST BUMP
The fist bump is that tapping of fists together as a form of greeting. It is a more “hip” version of a handshake, a might be called a “pounding of flesh”.

36. WWII correspondent Reynolds QUENTIN
Journalist and WWII war correspondent Quentin Reynolds is perhaps best remembered for winning a libel suit against fellow journalist Westbrook Pegler. Pegler had called Reynolds “yellow” and an “absentee war correspondent”, and as a result Reynolds was awarded the largest libel judgment given up till that date. The trial was immortalized in a Broadway play called “A Case of Libel”.

41. FBI Academy site QUANTICO
The FBI Academy is located on a Marine Corps base in Quantico, Virginia. The academy opened for the first trainees in 1972. Included in training complex is a 10-acre mock city known as Hogan’s Alley.

42. Parade honoree, briefly ST PAT
There is a fair amount known about St. Patrick, some of which comes from two letters written in his own hand. St. Patrick lived in the fifth century, but was not born in Ireland. He was first brought to Ireland at about 16 years of age from his native Britain, by Irish raiders who made him a slave for six years. Patrick managed to escape and returned to his homeland where he studied and entered the Church. He went back to Ireland as a bishop and a missionary and there lived out the rest of his life. There seems to be good evidence that he died on March 17th (now celebrated annually as St. Patrick’s Day), although the year is less clear. The stories about shamrock and snakes, I am afraid they are the stuff of legend.

46. Certain retiree’s title: Abbr. EMER
Emeritus (female form “emerita”, plural “emeriti”) is a term in the title of some retired professionals, particularly those from academia. Originally an emeritus was a veteran soldier who had served his time. The term comes from the Latin verb “emerere” meaning to complete one’s service.

47. __-Magnon CRO
Remains of early man, dating back to 35,000 years ago, were found in Abri de Cro-Magnon in southwest France, giving the name to those early humans. Cro-Magnon remains are the oldest human relics that have been discovered in Europe.

61. Tiny sucker LOUSE
Lice (singular “louse”) are small wingless insects of which there are thousands of species, three of which are human disease agents. The three kinds of lice affecting humans are head lice, body lice and pubic lice. Most lice feed on dead skin found on the body of the host animal, although some feed on blood. Ick …

63. Gene Vincent’s “__ Lovin'” LOTTA
Gene Vincent was the stage name of fifties rock and roll and rockabilly singer Vincent Craddock. Vincent was the first inductee into the Rockabilly Hall of Fame when it was formed in 1997. His biggest hit was his own composition “Be-Bop-A-Lula”, which was released in 1956.

6. Millinery blocks HAT FORMS
A milliner is someone who makes, designs or sells hats. Back in the 1500s, the term described someone who sold hats made in Milan, Italy, hence the name “milliner”.

8. Source of inside info? CT SCAN
A CT (or “CAT”) scan produces (via computer manipulation) a three dimensional image of the inside of an object, usually the human body. It does so by taking a series of two dimensional x-ray images while rotating the camera around the patient. The issue with CT scans is that they use x-rays, and high doses of radiation can be harmful causing damage that is cumulative over time.

9. Pool KITTY
The “pot” in a card game has been referred to as the kitty since the 1880s. It’s not certain how the name “kitty” evolved but possibly it came from “kit”, the necessary equipment for the game.

The University of Virginia sports teams are known officially as the Cavaliers. The unofficial nickname is the Wahoos.

11. Longtime Mississippi senator Cochran THAD
Senator Thad Cochran is the senior senator from Mississippi, and a Republican. While earning his B.A. at the University of Mississippi, Cochran was on the cheerleading squad, with fellow senator Trent Lott.

13. Michael of “Michael Clayton” O’KEEFE
Michael O’Keefe played Danny Noonan in the film “Caddyshack” (I’m not a big fan of that movie). I also saw O’Keefe not too long ago in the George Clooney film “Michael Clayton”.

14. Poland Spring parent NESTLE
Poland Spring is a Nestle brand of bottled water that is bottled in Poland, Maine, hence the name.

21. Prominent elephant seal features SNOUTS
Elephant seals are so called because the adult male, known as a “bull”, has a prominent snout that resembles an elephant’s trunk.

26. Like granola OATEN
The name “Granola” (and “Granula”) were trademarked back in the late 1800s for whole-grain foods that were crumbled and baked until crisp. Granola was created in Dansville, New York in 1894.

33. Mideast party BA’ATH
The Ba’ath Party was founded in Syria in 1947. The party promotes the unification of the Arab world into one nation, and has the motto “Unity, Liberty, Socialism”.

36. Amtrak unwinding area QUIET CAR
Amtrak is the name used commercially by the National Railroad Passenger Corporation. “Amtrak” comes from a melding of the words “America” and “track”.

39. Firth of Forth outlet NORTH SEA
The North Sea is an offshoot of the Atlantic Ocean that is located between Britain and Scandinavia.

The Firth of Forth is the estuary into which flows the River Forth in Scotland. The firth is actually a fjord, formed in the last Ice Age.

41. Tonic component QUININE
The original tonic water was a fairly strong solution of the drug quinine dissolved in carbonated water. It was used in tropical areas in South Asia and Africa where malaria is rampant. The quinine has a prophylactic effect against the disease, and was formulated as “tonic water” so that it could be easily distributed. In British colonial India, the colonial types got into the habit of mixing in gin with the tonic water to make it more palatable by hiding the bitter taste of the quinine. Nowadays, the level of quinine in tonic water has been dropped, and sugar has been added.

43. Lozenge TROCHE
A troche is a medicinal lozenge, like a pastille, and is usually circular in shape. “Troche” ultimately derives from the Greek word for “wheel”.

49. Hawaiian-born head of state OBAMA
Despite rumors to the contrary, I am pretty sure that Barack Hussein Obama II was indeed born in Hawaii. President Obama was born on August 4, 1961 at Kapi’olani Maternity & Gynecological Hospital in Honolulu, Hawaii.