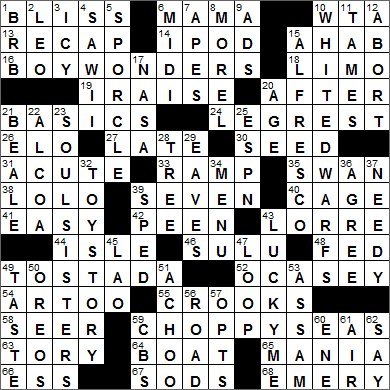 CROSSWORD SETTER: C.C. Burnikel
THEME: Seven Things … each of today’s themed answers ends with something that often comes in SEVENS:

39A. Number associated with the ends of answers to the starred clues SEVEN

Today’s Wiki-est, Amazonian Googlies
Across
6. Fairy tale bear MAMA
The story of “Goldilocks and the Three Bears” was first recorded in 1837, in England, although the narrative was around before it was actually written down. The original fairy tale was rather gruesome, but successive versions became more family-oriented. The character that eventually became Goldilocks was originally an elderly woman, and the three “nameless” bears became Papa Bear, Mama Bear and Baby Bear.

14. Apple’s shuffle or touch IPOD
The iPod Shuffle was introduced in 2005 and is the smallest of Apple’s line of audio players. The Shuffle was the first iPod to use flash memory.

15. Melville captain AHAB
Captain Ahab is the obsessed and far from friendly captain of the Pequod in Herman Melville’s “Moby-Dick”. The role of Captain Ahab was played by Gregory Peck in the 1956 John Huston film adaptation. Patrick Stewart played Ahab in a 1998 miniseries in which Peck made another appearance, as Father Mapple.

18. Fancy airport ride LIMO
The word “limousine” actually derives from the French city of Limoges. The area around Limoges is called the Limousin, and it gave its name to a cloak hood worn by local shepherds. In early motor cars, a driver would sit outside in the weather while the passengers would sit in the covered compartment. The driver would often wear a limousin-style protective hood, giving rise to that type of transportation being called a “limousine”. Well, that’s how the story goes anyway …

20. Last word of many fairy tales … AFTER
… and they all lived happily ever after.

26. “Xanadu” rock gp. ELO
The title song of the 1980 movie “Xanadu” was performed by the Electric Light Orchestra (ELO) and Olivia Newton-John (who starred in the film). Despite the popularity of ELO around the world, the song “Xanadu” was the band’s only number one hit back in their homeland of the UK.

35. Graceful bird SWAN
An adult male swan is called a “cob”, and an adult female is a “pen”. Young swans are called “swanlings” or “cygnets”.

38. Echoic first name of Olympic hurdler Jones LOLO
Lolo Jones is a track and field athlete from Des Moines, Iowa and is the American record holder for the 60m hurdles. Jones is a year-round competitor, as she is also a brakeman on the national bobsled team.

40. Pet gerbil’s home CAGE
Most species of gerbil are native to arid regions, and in fact used to be called “desert rats”. They make popular household pets because they are very social and friendly by nature. As desert natives, they also have specially adapted kidneys that produce a very small amount of waste so that bodily fluids are preserved.

42. Rounded hammer end PEEN
The peen of a hammer is on the head, and is the side of the head that is opposite the striking surface. Often the peen is in the shape of a hemisphere (as in a ball-peen hammer), but usually it is shaped like a claw (mainly for removing nails).

43. “Casablanca” actor Peter LORRE
The marvelous actor Peter Lorre was born in what is now modern-day Slovakia. Lorre’s real name was Laszlo Lowenstein. He started acting in Vienna when he was quite young, only 17 years old. When Hitler came to power, the Jewish Lowenstein headed to Paris and then London, eventually ending up in Hollywood. Lorre found himself typecast as the wicked foreigner in American movies, but I think he sneered and snarled his way to the bank.

46. “Star Trek” helmsman SULU
Mr Sulu was played by George Takei in the original “Star Trek” series. Takei has played lots of roles over the years, and is still very active in television. Did you know that he appeared in the 1963 film, “Pt-109”? He played the helmsman steering the Japanese destroyer that ran down John F. Kennedy’s motor torpedo boat.

49. Fiesta food TOSTADA
In Mexican cuisine, a tostada is a flat or bowl-shaped tortilla. “Tostada” translates literally from Spanish as “toasted”.

52. Irish playwright Sean O’CASEY
Seán O’Casey was an Irish playwright noted for his works exploring the plight of the working class in Dublin. O’Casey’s most famous works are “Juno and the Paycock” and “The Plough and the Stars”.

C-3PO, or “Threepio”, is the protocol droid that appears in all six “Star Wars” movies.

59. *Windy day ocean condition CHOPPY SEAS (giving “seven seas”)
The phrase “the seven seas” has been used for centuries by many different peoples. The actual definition of what constitutes the collection of seven has varied depending on the period and the culture. Nowadays we consider the seven largest bodies of water as the seven seas, namely:
– The North Pacific Ocean

68. Nail file material EMERY
Emery is a very hard type of rock that is crushed for use as an abrasive. Emery paper is made by gluing small particles of emery to paper. Emery boards are just emery paper with a cardboard backing. And emery boards are primarily used for filing nails.

2. Lion in the night sky LEO
The constellation called Leo can be said to resemble a lion. Others say that it resembles a bent coat hanger. “Leo” is the Latin for “lion”, but I’m not sure what the Latin is for “coat hanger” …

4. 2005 horror sequel SAW II
The “Saw” franchise of movies is gruesome in the extreme. I’ve only seen a few minutes of “Saw” footage (accidentally). The stories are about imprisoned victims who are faced with having to mutilate themselves to escape. Ugh …

5. Website with timed trivia quizzes SPORCLE
Sporcle.com is a trivia quiz website. The name is derived from the word “oracle” apparently. I like the web site’s mission statement: “We actively and methodically search out new and innovative ways to prevent our users from getting any work done whatsoever.”

8. Gourmet mushroom MOREL
The morel is that genus of mushroom with the honeycomb-like structure on the cap. They’re highly prized, especially in French cuisine. Morels should never be eaten raw as they are toxic, with the toxins being removed by thorough cooking.

10. *Earth-sized collapsed stars WHITE DWARFS (giving “Seven Dwarfs”)
A white dwarf is what’s left of a star after it has collapsed, before it turns into a neutron star or black hole. A white dwarf might have the same mass as our Sun, but that mass has collapsed into a volume about the size of the Earth. Our nearest white dwarf is Sirius B.

15. Outdoor, as cafes ALFRESCO
Our word “alfresco” means outdoors, in the fresh air. The term derives from the Italian “al fresco”, which translates as “in the fresh (air)”.

17. Curiosity-launching gp. NASA
NASA’s Curiosity rover is the fourth in a series of unmanned surface rovers that NASA has sent to Mars. Previous rovers are the Sojourner rover (1997), Spirit rover (2004-2010) and Opportunity rover (2004-present). Curiosity rover was launched in November of 2011, and landed on Mars in August 2012 after having travelled 350 million miles. After that long journey, Curiosity landed just 1½ miles from its targeted touchdown spot.

20. __ of Reason AGE
Thomas Paine’s pamphlet known as “The Age of Reason” (published in three parts, in 1794, 1795 and 1807) is critical of mainstream religion and also challenges the legitimacy of the Bible.

21. Memphis music festival street BEALE
Beale Street in downtown Memphis, Tennessee is a major tourist attraction. In 1977, by act of Congress, the street was officially declared the “Home of the Blues” due to its long association with the musical genre. Apparently “Beale” is the name of some forgotten military hero.

22. Metal wrap giant ALCOA
The Aluminum Corporation of America (ALCOA) is the largest producer of aluminum in the United States. The company was founded in 1888 in Pittsburgh, Pennsylvania where its headquarters are to this day.

Before thin sheets of aluminum metal were available, thin sheets of tin were used in various applications. Tin foil isn’t a great choice for wrapping food though, as it imparts a tinny taste. On the other side of the pond, aluminum foil has a different name. No, it’s not just the different spelling of aluminum (“aluminium”). We still call it “tin foil”. You see, we live in the past …

23. *Best female friends SOUL SISTERS (giving “Seven Sisters”)
The Seven Sisters of Greek mythology are also known as the Pleiades. The Seven Sisters were the daughters of the titan Atlas, who had been forced to carry the heavens on his shoulders. In an act of kindness, Zeus transformed the sisters first into doves, and then into stars so that they could provide comfort for their father. There is indeed a cluster of seven stars in the night sky named for the myth and known as the Pleiades.

32. Film that introduced Buzz Lightyear TOY STORY
1995’s “Toy Story” was the world’s first feature-length computer-animated movie. “Toy Story” was also the studio Pixar’s first production. The main roles in the film are Woody and Buzz Lightyear, voiced by Tom Hanks and Tim Allen respectively. Hanks was the first choice to voice Woody, Allen was asked to voice Buzz after Billy Crystal turned down the role.

45. Poet __-tzu LAO
Lao Tse (also Lao-Tzu) was a writer and a central figure in the development of the religion/philosophy of Taoism.

50. Twistable cookies OREOS
There is an “official” competition involving Oreo cookies, in case anyone is interested in participating. A competitor has to take several steps to finish an OREO Lick Race:

53. Tea region of India ASSAM
Assam is a state in the very northeast of India, just south of the Himalayas. Assam is noted for its tea as well as its silk.

59. “Madam Secretary” network CBS
“Madam Secretary” is TV show that first aired in 2014. It is about an ex-CIA analyst who is appointed as US Secretary of State. Téa Leoni plays the title role, ably supported by a favorite actress of mine, Bebe Neuwirth. I like this show …