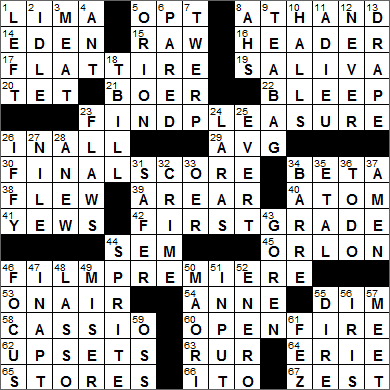 CROSSWORD SETTER: C.W. Stewart
THEME: Open Fire … each of today’s themed answers is formed by OPENING the word FIRE, i.e. the letters F-I-R-E form the ends of each answer:

60A. “Chestnuts roasting” spot … and a hint to a divided word found in the answers to starred clues OPEN FIRE

17A. *Motorist’s headache FLAT TIRE
23A. *Enjoy, with “in” FIND PLEASURE …
30A. *Recap on a sports crawl line FINAL SCORE
42A. *Kids’ introduction to a full school day FIRST GRADE
46A. *Red-carpet movie event FILM PREMIERE

Today’s Wiki-est, Amazonian Googlies
Across
1. Succotash bean LIMA
The main ingredients in succotash are corn and lima beans, although in parts of the South, succotash can be made with any collection of vegetables prepared with lima beans and topped with butter.

14. Tree of Life garden EDEN
There is mention in the Bible of both the tree of life and the tree of the knowledge of good and evil. Apparently there is some debate over whether or not the two trees are one and the same.

15. Like much sushi RAW
Sushi is a Japanese dish that has as its primary ingredient cooked, vinegared rice. The rice is usually topped with something, most often fish, and can be served in seaweed rolls. If you want raw fish by itself, then you have to order “sashimi”.

16. Set of lines on personal stationery HEADER
“Stationery” is a noun describing writing materials and office supplies, items that are sold by a stationer. Centuries ago, a stationer was someone who sold goods from a shop or a “station”, from a fixed, stationary stall.

20. Vietnamese New Year TET
The full name for the New Year holiday in Vietnam is “Tet Nguyen Dan” meaning “Feast of the First Morning”, with the reference being to the arrival of the season of spring. Tet usually falls on the same day as Chinese New Year.

21. Dutch South African BOER
“Boer” is the Dutch and Afrikaans word for “farmer”, a word that was used to describe the Dutch-speaking people who settled parts of South Africa during the 1700s.

22. Censor’s cover-up BLEEP
The original “censor” was an officer in ancient Rome who had responsibility for taking the “census”, as well as supervising public morality.

29. Part of DJIA: Abbr. AVG
Dow Jones & Company was founded as a publishing house in 1882 by three newspaper reporters, Charles Dow, Edward Jones and Charles Bergstresser. Today, the company’s most famous publication has to be “The Wall Street Journal”. In 1884, Charles Dow started reporting the average dollar value of the stock of eleven companies, an index which spawned a whole host of metrics that carry the Dow Jones name to this day, including the renowned Dow Jones Industrial Average (DJIA), also known as the “Dow 30”.

34. Phi __ Kappa BETA
Phi Beta Kappa was the first collegiate Greek fraternity in the US, founded in 1776 at the College of William and Mary. The organization served as a model for future collegiate fraternities and sororities, although in the 19th century Phi Beta Kappa distanced itself from the fraternal focus and transformed into the honor society that it is today, recognizing academic excellence. The initials Phi Beta Kappa stand for “philosophia biou kybernētēs”, which translates into “philosophy is the guide of life”. The symbol of the Phi Beta Kappa Society is a golden key.

41. Evergreen shrubs YEWS
The family of trees known as yews propagate by producing a seed surrounded by soft, sweet and brightly colored aril. Birds eat the fruit and then disperse the seed in their droppings. The birds leave the seed undamaged, and so are unharmed by the potent poisons taxine and taxol that are found within the seed. The seeds are highly toxic to humans.

44. Religious sch. SEM
Originally, a “seminary” was where plants were raised from seeds, as “semen” is the Latin for “seed”. The first schools labelled as seminaries were established in the late 1500s. Those first schools were more likely to be academies for young ladies back then, rather than for trainee priests.

45. Wrinkle-resistant synthetic ORLON
Orlon is the brand name used by the DuPont Corporation for the acrylic fibers the company developed in 1941.

54. Either of two Henry VIII wives ANNE
Anne Boleyn was the second wife of Henry VIII of England. Anne was found guilty of high treason after about a thousand days of marriage to Henry, accused of adultery and incest (probably trumped-up charges). She was executed, but perhaps her legacy lived on in her only child, as her daughter reigned for 45 very prosperous years as Queen Elizabeth I.

Anne of Cleves was the fourth wife of King Henry VIII. It seems that Anne’s arranged marriage to Henry was doomed from the day the two met soon after she arrived in England. Henry just wasn’t attracted to her, but the couple went ahead with the wedding. The marriage was annulled six months later on the grounds that it had not been consummated. Anne lived the rest of her life in England, and in fact outlived Henry’s five other wives.

58. Victimized lieutenant in “Othello” CASSIO
Shakespeare’s “Othello” was first performed in 1604. The main characters in the play are:

60. “Chestnuts roasting” spot … and a hint to a divided word found in the answers to starred clues OPEN FIRE
The Christmas classic known as “The Christmas Song”, which starts out with the line “Chestnuts roasting on an open fire”, was written in 1944 by Bob Wells and singer Mel Tormé. According to Tormé, the song was actually written on a very hot summer day, with Wells providing the lyrics. Apparently without the intention of writing a song, Wells jotted down four Christmassy phrases in an effort to “stay cool by thinking cool”. Those phrases were:

“The Christmas Song” is now the most-performed Christmas song in the world.

63. 1921 robot play RUR
Karel Čapek was a Czech writer noted for his works of science fiction. Čapek’s 1920 play “R.U.R.” is remembered in part for introducing the world to the word “robot”. The words “automaton” and “android” were already in use, but Capek gave us “robot” from the original Czech “robota” meaning “forced labor”. The acronym “R.U.R.”, in the context of the play, stands for “Rossum’s Universal Robots”.

64. Pennsylvania port ERIE
Erie is a city in the very north of Pennsylvania, right on the southern shore of Lake Erie. The city takes its name from the Erie Native American tribe that resided in the area.

Down
3. Vegan no-no MEAT
A vegan is someone who stays away from animal products. A dietary vegan eats no animal foods, not even eggs and dairy which are usually eaten by vegetarians. Ethical vegans take things one step further by following a vegan diet and also avoiding animal products in other areas of their lives e.g. items made from leather or silk.

5. Hunter constellation ORION
The very recognizable constellation of Orion is named after the Greek God Orion, the Hunter. If you take a look at the star in Orion’s “right shoulder”, the second brightest star in the constellation, you might notice that it is quite red in color. This is the famous star called Betelgeuse, a red supergiant, a huge star that is on its way out. Betelgeuse is expected to explode into a supernova within the next thousand years or so. You don’t want to miss that …

9. Lipton packet TEA BAG
Sir Thomas Lipton was a grocer in Glasgow, Scotland. He founded a tea packing company in North America in 1893, in Hoboken, New Jersey. He was very successful as his blends of tea became popular in the US. Despite the Lipton roots in the UK, Lipton black tea isn’t available there, so I’ve always thought of it as an American brand.

18. Govt. security T-BILL
A Treasury note (T-Note) is a government debt that matures in 1-10 years. A T-Note has a coupon (interest) payment made every six months. The T-note is purchased at a discount to face value, and at the date of maturity can be redeemed at that face value. A T-Bill is a similar financial vehicle, but it matures in one year or less, and a T-Bond matures in 20-30 years.

24. “__ Theme”: “Doctor Zhivago” song LARA’S
The very lovely “Lara’s Theme” is a leitmotif written for the 1965 movie “Doctor Zhivago” by Maurice Jarre. Lara is the name of the character played by the wonderful Julie Christie. The theme was later incorporated into a hit song with the title “Somewhere My Love”.

Wimbledon is a suburb of London located in the southwest of the metropolis. Wimbledon translates from Old English as “Wynnman’s Hill”, with “dun” being an archaic word for “hill”. And, the district is home to the All England Club where the Wimbledon tennis championships are played each year.

27. Aswan High Dam river NILE
The Aswan Dam on the River Nile is actually two dams. The Low Dam was first built in 1902 (and modified later). The High Dam was completed in 1970.

32. Burglary, for one CRIME
The crime of burglary is the breaking into and entering of a building with the intent to steal. The actual theft is a separate crime.

34. Ballerina’s rail BARRE
A “barre” is a handrail used by ballet dancers for warm-up exercises and to provide support when practicing certain moves.

37. “I’m with you!” AMEN!
The word “amen” is translated as “so be it”. “Amen” is said to be of Hebrew origin, but it is likely to be also influenced by Aramaic and Arabic.

43. “The Elements of Bridge” author Charles GOREN
Charles Goren was a world champion bridge player from Philadelphia. Goren published many books on the subject, and had a daily bridge column that appeared in almost 200 newspapers. He even had a weekly column in “Sports Illustrated”. Goren introduced several techniques and systems that eventually became part of the modern Standard American bidding system that is used by many bridge players today (including me!).

44. 7UP rival SPRITE
Sprite is Coca-Cola’s answer to the very successful soft drink called 7UP. Sprite was introduced in 1961, and Coca-Cola used its muscle to topple 7UP from its dominant position in the market. Sprite has been the number-one selling lemon soda since 1978.

50. New Zealand native MAORI
The Māori are the indigenous people of New Zealand. The Māori are eastern Polynesian in origin and began arriving in New Zealand relatively recently, starting sometime in the late 13th century. The word “māori” simply means “normal”, distinguishing the mortal human being from spiritual entities.

56. Commonly purple bloom IRIS
Iris is a genus of flowering plants that come in a wide variety of flower colors. The term “iris” is a Greek word meaning “rainbow”. Many species of irises are called “flags”. One suggestion is that the alternate name comes from the Middle English “flagge” meaning “reed”. This term was used because iris leaves look like reeds.

59. ’40s spy org. OSS
The Office of Strategic Services (OSS) was formed during WWII in order to carry out espionage behind enemy lines. A few years after the end of the war the OSS functions were taken up by the Central Intelligence Agency, a new group that was chartered by the National Security Act of 1947.

61. Shriner’s hat FEZ
“Fez” is the name given to the red cylindrical hat worn mainly in North Africa, and by Shriners here in the US. The fez used to be a very popular hat across the Ottoman Empire. The etymology of “fez” is unclear, although it might have something to do with the Moroccan city named Fez.