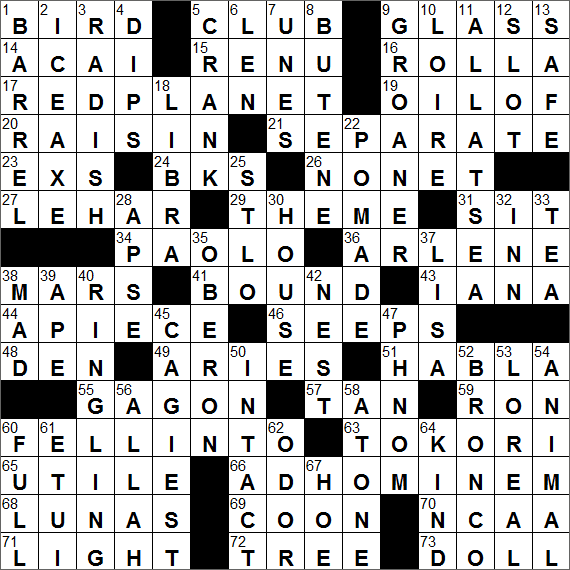 Today’s grid is HOUSEBOUND in that all of the answers around the BOUNDARY need the word HOUSE for completion:

The old adage “People in glass houses shouldn’t throw stones” is indeed “old”. A version of the phrase dates back at least to Geoffrey Chaucer who wrote in “Troilus and Criseyde” circa 1385:

Who that hath an hed of verre, Fro cast of stones war hym in the werre!

Rolla, Missouri is home to the Missouri University of Science and Technology, founded in 1858.

“The Merry Widow” is an operetta composed by Franz Lehar. It is a comic piece about a rich widow and the attempts by her countrymen to marry her off in order to keep her fortune in the poverty-stricken Grand Duchy of Pontevedro. “The Merry Widow” was first performed in 1905 and has been popular ever since.

A “leitmotif” in the world of music is a recurring musical phrase that is associated with a particular theme or perhaps a particular person. Common in classical works, leitmotifs are also frequently used in film music. A classic example would be the strident notes played every time Darth Vader appears on the screen in a “Star Wars” movie.

In Italian, “Paolo” (Paul) wrote a set of “epistolas” (epistles).

“Habla español?” is Spanish for “Do you speak Spanish?”

Ad hominem arguments appeal to personal beliefs and/or emotions rather than to logic or reason. The phrase “ad hominem” is Latin meaning “to the man”, indicating that the appeal is to the person with whom one is debating or whom one is trying to influence.

The lime-green Luna Moth is one of the largest moths found in North America, growing to a wingspan of up to 4½ inches.

March Madness is the name given to the NCAA Men’s Division 1 Basketball Championship (among others), held in spring each year.

Barrelhouse is style of jazz that strongly features a wild, improvised piano part. The style is an early form of the genre, named for the cheap saloons common in the early 1900s. A “barrelhouse” was so called because of the racks of liquor barrels that would line the walls of the establishment.

I used to walk my dog right past author Len Deighton’s house years ago, as we lived in the same village in Ireland (probably my only claim to fame!). Deighton wrote the excellent espionage thriller “The IPCRESS File”, made into a 1965 movie starring Michael Caine.

“Une” is the French word for “a”, but only when used with a feminine noun (like “une dame”: a lady).

Quite a few years ago now, I had the privilege of living just a short car-ride from the beautiful city of Arles in the South of France. Although Arles has a long and colorful history, the Romans had a prevailing influence over the city’s design. Arles has a spectacular Roman amphitheater, arch, circus as well as old walls that surround the center of the city. In more modern times, it was a place Vincent van Gogh often visited, and where he painted his famous “Cafe Terrace at Night”, as well as “Bedroom in Arles”.

Butene (different from “butane”) is also known as butylene. One of the major uses of butylene is in the production of synthetic rubber.

Ivan Pavlov was studying gastric function in dogs in the 1890s when he observed that his subject dogs started to salivate before he even presented food to them. This “psychic secretion”, as he called it, interested him so much that he changed the direction of his research and studied the reactions of dogs to various stimuli that were associated with the presentation of food. Famously, he discovered that a dog could be conditioned to respond as though he was about to be fed, just by sensing some stimulus that he had come to associate with food. This might be a bell ringing, an electric shock (poor dog!) or perhaps the waving of a hand. Nowadays we might describe someone as “Pavlov’s Dog” if that person responds just the way he/she has been conditioned to respond, rather than applying critical thinking.

The Loire is the longest river in France. It is so long that it drains one-fifth of the nation’s land mass. The Loire rises in the southeast, in the Cevennes mountain range, then heads north and then due west, emptying into the Bay of Biscay at the city of Nantes. The Loire Valley is home to some of France’s most famous wine production, and includes the wine regions of Sancerre, Pouilly-Fumé and Muscadet.

Pomade is perfumed ointment, mainly used for grooming the hair. The word “pomade” is derived from the Latin “pomum” meaning “apple”, as the original ointment recipe used smashed apples.

The original use of our word “quarantine” back in the 1500s was as a legal term. A quarantine was the 40 days in which a widow had the legal right to reside in her dead husband’s house.

Twinings is a distributor of tea that was founded in England in 1706. That’s a long time ago! The Twinings logo is the oldest continuously-used logo in the world. The first Twinings shop opened on the Strand in London, also in 1706.

The 2015-season Super Bowl was played on 7th February 2016, with the Denver Broncos emerging victorious over the Carolina Panthers. Tradition dictates that Super Bowls are numbered using Roman numerals, which would have resulted in the name “Super Bowl L”. It was decided to temporarily drop the Roman numerals and go with “Super Bowl 50” instead.

L’Oréal is a French cosmetics company, the largest cosmetics and beauty company in the world. Here in the US, L’Oréal runs a “Women of Worth” program that honors women who volunteer in their communities. The phrase “Women of Worth” underlines the longstanding L’Oréal slogan “Because I’m worth it”, which evolved into “Because you’re worth it” and eventually “Because we’re worth it”.

“Notions” are miscellaneous items, especially the likes of needles, buttons and thread.

5…Dressing room of a sort..CLUB(HOUSE)

55…Be unable to swallow..GAG ON

73…Where an inch may represent a foot..DOLL(HOUSE)

30…With 41-Across, quarantined, and a hint to completing 12 puzzle answers..HOUSE-