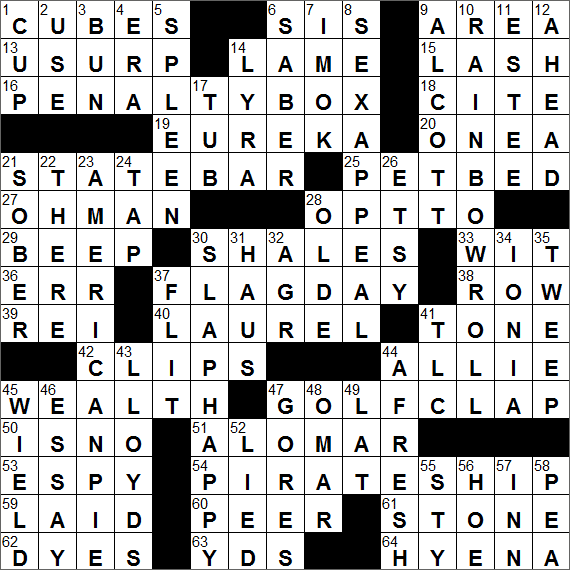 Today’s themed answers each start with a type of FLAG, in honor of FLAG DAY, which is today!

Those would be ice cubes.

Variations of mascara have been around a long time, and certainly there was a similar substance in use in Ancient Egypt. “Mascara” is a Spanish word meaning “stain, mask”.

“Eureka” translates from Greek as “I have found it”. The word is usually associated with Archimedes, uttered as he stepped into his bath one day. His discovery was that the volume of water that was displaced was equal to that of the object (presumably his foot) that had been submerged. He used this fact to determine the volume of a crown, something he needed in order to determine if it was made of pure gold or was a forgery.

The US government maintains information on all males who are potentially subject to military conscription, using what is called the Selective Service System(SS). In the event that a draft was held, men registered would be classified into groups to determine eligibility for service. Class 1-A registrants are those available for unrestricted military service. Other classes are 1-A-O (conscientious objector available for noncombatant service), 4-A (registrant who has completed military service) and 4-D (Minister of religion).

Jimmy Fallon was a cast member for a number of years on “Saturday Night Live” before getting his own talk show in 2009, “Late Night with Jimmy Fallon”. Fallon took over “The Tonight Show” from Jay Leno in 2014. I’m not a big fan …

37…June 14th observance … and a hint to the first word in the answers to starred clues..FLAG DAY

REI is a sporting goods store, the initialism standing for Recreational Equipment Inc. REI was founded in Seattle by Lloyd and Mary Anderson in 1938 as a cooperative that supplies quality climbing gear to outdoor enthusiasts. The first full-time employee hired by the Andersons was Jim Whittaker, who was the American to climb Mount Everest.

45…”The ability to fully experience life,” per Thoreau..WEALTH

Henry David Thoreau is a personal hero of mine. Thoreau is best known for his book called “Walden” published in 1854. The book outlines his philosophy of life and details his experiences living in a cabin near Walden Pond just outside Concord, Massachusetts.

A “golf clap” is a deliberately quiet and soft clap, a form of applause that is considered appropriate at a golf tournament.

51…Sandy or Roberto of baseball..ALOMAR

The Jolly Roger is a flag that was flown by pirates to identify their vessels, basically to strike fear in the hearts of the crews they were attacking. We usually think of the Jolly Roger’s design as a white skull and crossbones on a black background. There is a theory that pirates originally flew a red flag, and this was known colloquially as the “pretty red”, or “joli rouge” in French. “Joli Rouge” then evolved into “Jolly Roger”.

The famous lightsaber weapons in the “Star Wars” series of films were updated for the seventh episode “Star Wars: The Force Awakens”. The new lightsabers have energy crossguards just above the grip.

In Japanese cuisine, the rainbow roll is an example of “uramaki” (inside-out roll). Uramaki is rolled sushi in which the rice is on the outside of the “nori” (seaweed). Rainbow rolls are then topped with different colors of sushi, and laid out on the plate in a rainbow-like array. Those topping are usually thinly sliced maguro (tuna), hamachi (yellowtail), ebi (shrimp) and avocado.

Lyra (Latin for “lyre”) is a constellation that includes the star Vega, one of the brightest stars in the night sky. The constellation Lyra is surrounded by the neighboring constellations of Draco, Hercules, Vulpecula and Cygnus.

The lyre is a harp-like stringed instrument most closely associated with Ancient Greece, and with the gods Hermes and Apollo in particular. According to myth, Hermes slaughtered a cow from a sacred herd belonging to Apollo and offered it to the gods but kept the entrails. Hermes used the entrails to make strings that he stretched across the shell of a tortoise, creating the first lyre. Apollo liked the sound from the lyre and agreed to accept it as a trade for his herd of cattle.

“Loaded” is a slang term for “drunk”.

Don McLean released his greatest hit, “American Pie”, back in 1971. Despite the song’s iconic position in the pop repertoire, McLean has been remarkably reticent about its origins and the meaning of the lyrics. We do know that it was inspired by the death of Buddy Holly in a plane crash (“the day the music died”). McLean has also told us that he first read about the death of his idol when delivering newspapers the day after the crash (“February made me shiver/with every paper I’d deliver”). Although the lyrics have been analyzed and interpreted in depth by many, McLean’s stance remains that it is just a poem set to music …

Legend has it that Betsy Ross made the first American flag for General George Washington. However, this story only surfaced during the centennial celebrations of 1876, and although Betsy Ross was indeed one of several flag makers in Philadelphia in the days of George Washington, sadly there’s no definitive evidence that Ross provided that first stars and stripes.

The word “olde” wasn’t actually used much earlier than the 1920s. “Olde” was introduced to give a quaint antique feel to brand names, shop names etc.

Someone described as “slaphappy” is exhibiting extremely silly behavior. The term was first appeared in the 1930s, when it meant “punch-drunk”.

A “Fräulein” is an unmarried woman, in German. She might live in a “Haus” (house).

Followers of a particular user on Twitter can be called “tweeps”, a portmanteau from “Twitter” and “peeps”.

Lloyd’s of London isn’t actually an insurance company, but rather is a market where members can get together to spread the risk associated with policies that have been underwritten.

Tipper Gore is the wife of former Vice President Al Gore, although the couple have been separated since 2010. Ms. Gore was born Mary Elizabeth Aitcheson. The “Tipper” nickname comes from one of her favorite nursery rhymes, called “Tippy, Tippy, Tin”.

Omar Khayyam was a Persian with many talents. He was a poet as well as an important mathematician, astronomer and physician. A selection of his poems were translated by one Edward Fitzgerald in a collection called “Rubaiyat of Omar Khayyam”. Here are some lines from that collection:

The Ramada Inn hotel chain takes its name from the Spanish word for a shady resting place. A ramada is a shelter with a roof and no walls, mainly found in the American southwest. Nowadays a ramada can be temporary or permanent, but originally ramadas were makeshift shelters constructed by aboriginal Indians from branches or bushes.

37…June 14th observance … and a hint to the first word in the answers to starred clues..FLAG DAY

45…”The ability to fully experience life,” per Thoreau..WEALTH

51…Sandy or Roberto of baseball..ALOMAR

17…Shower stall alternative, if it fits..TUB