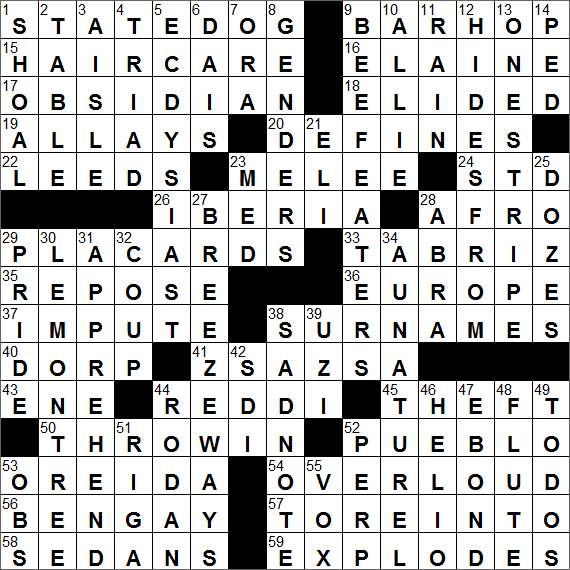 “The Lady of Shalott” is a beautiful poem by Alfred, Lord Tennyson. The storyline is based on the Arthurian legend of Elaine of Astolat. The opening lines are:

On either side the river lie
Long fields of barley and of rye,
That clothe the wold and meet the sky.
And thro’ the field the road runs by
To many-tower’d Camelot.

Obsidian is a volcanic glass, an igneous rock. Obsidian has many functional and decorative uses. I find the use of obsidian to make glass knives to be of particular interest. Well-made obsidian knives can have a cutting edge that is many times sharper than even the highest quality of steel.

“To elide” is to pass over, omit or slur a syllable when speaking.

Historically, Leeds United is one of the most successful clubs playing professional soccer in England, and is a team with a passionate fan base. The club is based in the city of Leeds in West Yorkshire, and the club badge feature the White Rose of York.

33…Iranian city known for its carpets..TABRIZ

Tabriz is a large city in the very northwest of Iran that once served as the country’s capital. The city is famous for its hand-woven rugs and jewelry.

Andorra is a small principality nestled in the Pyrenees between France and Spain. Andorra is a very prosperous country, mainly due to its status as a tax haven and thriving tourist industry. We used help out the tourist industry there in the winters, enjoying a couple of skiing holidays there. Happy memories …

What we usually refer to as a “family name” here in the US is routinely called a “surname” in British English.

Zsa Zsa Gabor is a Hungarian American actress, born in Budapest as Sári Gábor (the older sister of the actress Eva). Zsa Zsa Gabor has been married a whopping nine times, including a 5-year stint with Conrad Hilton and another 5 years with the actor George Sanders. One of Gabor’s famous quips is that she was always a good housekeeper, as after every divorce she kept the house!

“Moulin Rouge” is a 1952 film that tells the story of French artist Henri de Toulouse-Lautrec. Directed by John Huston, the movie stars José Ferrer as the artist and Zsa Zsa Gabor as Jane Avril, a can-can dancer who becomes the subject for some of his artworks.

Reddi-Wip is a brand of sweetened whip cream that comes out of a pressurized can. The propellant used in the can is nitrous oxide, also called “laughing gas”, which is the same gas used by dentists as an anesthetic.

Bengay is sold as a painkilling heat rub, to relieve aching muscles. It was developed in France by a Dr. Jules Bengue (hence the name) and was first sold in America way back in 1898.

A triad is a group of three, and specifically in music is a chord is made up of three notes.

An “ecdysiast” is a striptease artist. The term was coined by the writer H. L. Mencken in 1940 at the request of burlesque performer Gypsy Rose Lee. She wanted a word for her profession that had more dignity than “stripper”. The term comes from the Greek “ecdysis” meaning “to molt”.

About one quarter of the world’s languages collect nouns into genders, of which there are usually two or three. The most common gender divisions are masculine, feminine and neuter. Modern English really does not have grammatical genders, although there are some hangovers from Old English such as “he, she and it”, “tiger and tigress” and “duke and duchess”.

“Beefeater” is the popular name for a Yeoman Warder of the Tower of London. The official responsibility of a beefeater is to guard any prisoners in the Tower, and to look after the crown jewels. But the cadre of beefeaters actually spend their day guiding tours around the magnificent castle. No one really knows where the origin of the name “beefeater”. Any time you are in London, be sure to check out the Tower. As you leave the Tower, turn left and walk down to the river. There you can catch a water taxi to Westminster which will take you by St. Paul’s and drop you off at the Houses of Parliament, just around the corner from Westminster Abbey. A great day out …

“The Good Wife” is a legal drama showing on CBS starring Julianna Margulies as Alicia Florrick, a litigator who returns to practicing the law after spending 13 years as a stay-at-home mom. I binge-watched a few series of the show some time back. I find it to be well-written, with a great cast and great acting …

A group of lions is known as a “pride” of lions. It’s possible that the term “pride” in this context derives from the Latin “praeda” meaning “prey”.

The 1965 Trini Lopez hit “Lemon Tree” is a folk song that was written by Will Holt earlier in the sixties. Holt’s song is based on a Brazilian folk song “Meu limão, meu limoeiro”.

A coup d’état (often just “coup”) is the sudden overthrow of a government, and comes from the French for “stroke of state”. The Swiss-German word “putsch” is sometimes used instead of “coup”, with “Putsch” translating literally as “sudden blow”. We often use the shortened version “coup” to describe a successful and unexpected accomplishment.

“Au naturel” is a French phrase, simply meaning “in a natural state”. We use the term in the same sense, and also to mean “nude”.

If we end an address with bad news, we end on a “sad note”.

One of the positive outcomes of President Reagan’s Strategic Defense Initiative (SDI, also “Star Wars”) was a change in US defense strategy. The new approach was to use missiles to destroy incoming hostile weapons, rather than using missiles to destroy the nation attacking the country. The former doctrine of Mutually Assured Destruction went by the apt acronym of MAD …

Rodan is a flying pterosaur appearing in a series of Japanese monster movies, created by the same studio that had earlier come up with Godzilla.

Godzilla is a Japanese creation. The first in a very long series of films was released way back in 1954. The original name in Japanese was “Gojira”, but this was changed to Godzilla for audiences outside of Japan. “Gojira” is a combination of “gorira” and “kujira”, the Japanese words for gorilla and whale, apt because Godzilla is a big ape-like creature that came out of the deep.

Many plants grow towards the light, usually the light from the sun. That behavior is known as heliotropism.

What we know in American English as a “police lineup” is referred to as an “identity parade” in British English.

The Latin phrase “vox populi” translates as “voice of the people”. The expression is used in the world of broadcasting to describe interviews with members of the public.

33…Iranian city known for its carpets..TABRIZ

12…Avoids being seen by..HIDES FROM