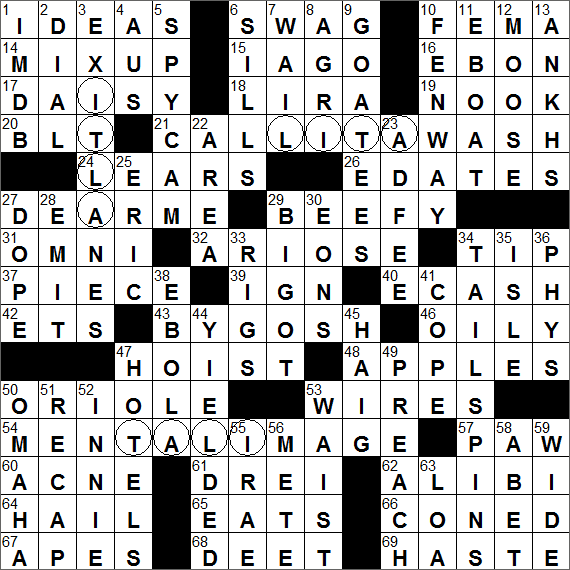 Each of today’s themed answers contains the letter sequence TAIL (circled in the grid), but those letters are in a SPIN, have been moved around:

“Swag” is “loot, stolen property”, a term that started out as criminal slang in England in the 1830s. Swag is also the name given to the promotional freebies available at some events.

Iago is the schemer in Shakespeare’s “Othello”. He is a soldier who fought alongside Othello and feels hard done by, missing out on promotion. Iago hatches a plot designed to discredit his rival Cassio by insinuating that Cassio is having an affair with Desdemona, Othello’s wife. By the end of the play it’s Iago himself who is discredited and Othello (before committing suicide) apologizes to Cassio for having believed Iago’s lies. Heavy stuff …

The word “lira” is used in a number of countries for currency. “Lira” comes from the Latin for “pound” and is derived from a British pound sterling, the value of a Troy pound of silver.

The Barnes & Noble electronic-book reader is called the Nook. If you are looking for a free read, Barnes & Noble allow you to read any e-book for free for up to an hour if connected to the Internet via a Barnes & Noble store’s Wi-Fi.

A tune that is “ariose” is song-like, characterized by melody as opposed to harmony.

The Baltimore Orioles are one of the eight charter teams of MLB’s American League, so the franchise dates back to 1901. Prior to 1901, the team has roots in the Minor League Milwaukee Brewers, and indeed entered the American League as the Brewers. In 1902 the Brewers moved to St. Louis and became the Browns. The team didn’t fare well in St. Louis, so when it finally relocated to Baltimore in the early fifties the team changed its name completely, to the Baltimore Orioles. The owners so badly wanted a fresh start that they traded 17 old Browns players with the New York Yankees. The trade didn’t help the team’s performance on the field in those early days, but it did help distance the new team from its past.

The Proactiv range of skincare products were introduced in 1995 by two dermatologists who met up with each other while studying at Stanford. Proactiv is market to people suffering with acne. There are quite a few folks who complain about the direct marketing approach to sales used for the products. Customers are “members” of a club, and the products keep coming until a subscription is canceled.

“Alibi” is the Latin word for “elsewhere” as in, “I claim that I was ‘elsewhere’ when the crime was committed … I have an ‘alibi'”.

DEET is short for N,N-Diethyl-meta-toluamide, an active ingredient in insect repellents. DEET is most often used to repel mosquitoes by applying it to the skin and/or clothing. It is also used to protect against tick bites.

“Sill plate” or simply “sill” is an architectural term for a bottom horizontal member to which vertical members are attached. A “window sill” is specific sill plate that is found at the bottom of a window opening.

The left field wall in Fenway Park, home of the Boston Red Sox baseball team, is the tallest encountered in Major League ballparks. The wall was built so high to prevent viewing of games from outside of the park for free. The height also prevents home runs that would be possible in other ballparks and so, given its color and reputation, it is called the Green Monster.

In WWII, the German Navy’s Motor Torpedo Boats were similar to American PT boats and were called S-boots, short for Schnellboot (“fast craft”). The Allied forces referred to them as E-boats, with the “E” possibly standing for “enemy” or “Eilboot” (“hurry boat”).

“The Adventures of Rocky and Bullwinkle” is a live-action/animated movie released in 2000 inspired by “The Rocky and Bullwinkle Show” TV show from the late fifties and early sixties. Rocky and Bullwinkle are in cartoon form in the film, whereas other characters are played by actors. The lead roles are Fearless Leader (Robert De Niro), Boris Badenov (Jason Alexander) and Natasha Fatale (Rene Russo).

Apparently, “to dope out” is a slang term meaning “to figure out, infer from available information”.

“Bigot” is a French word that back in the late 1500s meant “sanctimonious person, religious hypocrite”. We use the term today to describe someone who is biased towards his or her own group, and who is intolerant of those outside of that group.

Alexander Haig was Secretary of State under President Reagan, and White House Chief of Staff under Presidents Nixon and Ford. Famously, Haig took over temporary control of the country immediately after President Reagan was shot in 1981. To do so was a pragmatic move, while waiting on Vice President Bush to arrive in Washington. There was much debate at the time about the legality of the steps taken, as the presidential line of succession called out in the US Constitution is President, Vice President, Speaker of the House, President pro tempore of the US Senate, and then Secretary of State.

In the game of Monopoly, one can purchase a hotel by “demolishing” four houses and by paying an extra amount equal to the price of a house.

Quarterback Peyton Manning is known for repeatedly shouting out the word “Omaha” during the games. He explains that “Omaha” defines or modifies a play, but the meaning varies depending on circumstances. It’s all beyond me …

(62A…Suspected perp’s story..ALIBI)
The word “abet” comes into English from the Old French “abeter” meaning “to bait” or “to harass with dogs” (it literally means “to make bite”). This sense of encouraging something bad to happen morphed into our modern usage of “abet”, meaning to aid or encourage someone in a crime.

34…Line on a restaurant receipt..TIP

53…What undercover cops may wear..WIRES

54…It’s all in your mind..MENTAL IMAGE

66…Rolled to hold fries, as paper..CONED

34…Sudden downturns, and a literal hint to this puzzle’s circles..TAILSPINS

41…Handle it as well as one can..COPE