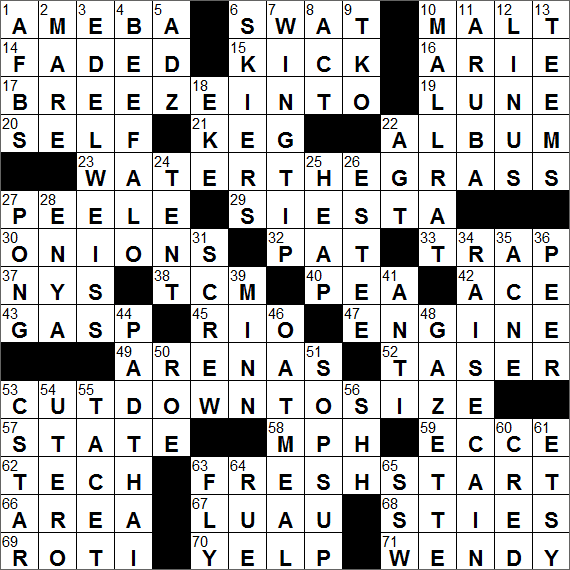 Today’s themed answers START with a word that is often preceded by FRESH:

India.Arie is an American soul and R&B singer who was born India Arie Simpson.

Deb is short for “debutante”, which translates from French as “female beginner”.

We use the term “album” to describe a collection of musical recordings. This usage started with the advent of the LP (long-playing) vinyl record in 1948. The term “album” had been used since the 1800s for a collections of short pieces of music, and this sense was carried forward with the new technology.

37…Where Hillary was a sen…NYS

Former First Lady Hillary Rodham Clinton was urged to run for the US Senate when Daniel Patrick Moynihan announced his plans to retire in 1998 from the office of Senator for the State of New York. When she decided to run, Clinton became the first First Lady of the US to contest an elected office. She defeated Republican Rick Lazio and was sworn in as US Senator in 2001.

Turner Classic Movies (TCM) is one of my favorite television channels, delivering just what its name promises: classic movies.

“WrestleMania” is a pay-per-view professional wrestling event that was first produced in 1985. I really don’t do wrestling …

The US President’s State of the Union address is requirement called out in Article II of the Constitution. George Washington gave the first address before a joint session of Congress in 1790. Thomas Jefferson discontinued the practice of making a personal address by sending Congress a written document that was then read out by a clerk. In 1913, Woodrow Wilson re-established the custom of delivering the message personally, There have been occasions since then when a written address has had to suffice, the last occasion being in 1981 when Jimmy Carter was in office.

In physics, a “scalar” is a one-dimensional quantity, whereas a “vector” has two dimensions. For example, speed is a scalar. On the other hand, velocity is a vector as it is defined by both speed and direction.

Pontius Pilate was the judge at the trial of Jesus Christ and the man who authorized his crucifixion. Over the years, many scholars have suggested that Pilate was a mythical character. However in 1961 a block of limestone was found in the modern-day city of Caesarea in Israel, and in the block was an inscription that included the name of Pontius Pilate, citing him as Prefect of Judea.

The Georgia Institute of Technology (commonly “Georgia Tech”) is located in Atlanta. The school was founded in 1885 as part of the reconstruction effort to rebuild the infrastructure in the South after the Civil War. President Theodore Roosevelt delivered an address to the school in 1905, and then shook hands with every single student. Back then the school didn’t have over 20,000 students as it does today …

The author and dramatist J. M. Barrie is best remembered as the creator of Peter Pan. Barrie wrote a play in 1904 called “Peter Pan; or, the Boy Who Wouldn’t Grow Up”. He turned this into a novel called “Peter and Wendy” in 1911. The girl’s name “Wendy” was very uncommon before Barrie named his character, and he is given credit for making the name as popular as it is today.

3…Flower in a “Sound of Music” song title..EDELWEISS

Beefalo are the offspring of cattle and American bison (“buffalo”). The cross is usually between a male bull and a female buffalo, as this is more likely to result in fertile offspring.

5…Wood shaper with a broad blade..ADZ

“Slalom” is an anglicized version of the Norwegian word “slalam” that translates as “skiing race”. There is a longer version of the traditional slalom that is called giant slalom.

Aruba is one of the so-called ABC Islands. The ABC Islands is the nickname given to the three westernmost islands of the Leeward Antilles in the Caribbean. The nickname comes from the first letters of the island names: Aruba, Bonaire and Curaçao. All three of the ABC Islands are part of the Kingdom of the Netherlands.

In Charles Schulz’s fabulous comic strip “Peanuts”, Charlie Brown is friends with at least three members of the van Pelt family. Most famously there is Lucy van Pelt, who bosses everyone around, particularly Charlie. Then there is Linus, Lucy’s younger brother, the character who always has his security blanket at hand. Lastly there is an even younger brother, Rerun van Pelt. Rerun is constantly hiding under his bed, trying to avoid going to school.

A “ten-percenter” is an informal term for agent, particularly a showbiz agent. The reference is to the 10% fee that agents often charge for their services.

As Cain was the first murderer according the Bible, he is associated with evil or trouble. The idiom “raise Cain” is the equivalent of “raise Hell” and “raise the Devil”. In all cases the meaning is to bring back evil or to cause trouble.

An unofficial nickname for the state of Minnesota is “Land of 10,000 Lakes”. That nickname is quite apt as the state is home to almost twelve thousand lakes that are at least ten acres in size.

The delicious dish called Pad Thai is a meld of stir-fried rice noodles with tamarind juice, red chili pepper plus a mix of vegetables and possibly tofu, meat or fish. It is usually topped with crushed peanuts, coriander and lime. The name “Pad Thai” translates as “fried Thai-style”.

Texarkana is the name given to the twin cities of Texarkana, Texas and Texarkana, Arkansas that sit either side of the state line between Texas and Arkansas. The name of “Texarkana” was given when the settlement was founded at the junction of two railroads in 1873. Back then, it was believed that the new city would be not only on the borders of Texas (TEX) and Arkansas (ARK) but also on the border of Louisiana (ANA), giving the city its name. The Louisiana state line was eventually set about 30 miles away, but the -ANA suffix was retained.

A carbon star (C star) is a star with an atmosphere rich in carbon, more carbon than oxygen. Such an atmosphere is very “sooty” and as such might appear very red in color when viewed through a telescope.

Red giants are very large stars with a relatively low mass. The atmosphere of a red giant is also very inflated and extends a long way into space so the surface of that atmosphere that we see is relatively cool, which gives it a red color.

“Tacet” is a musical direction meaning “be silent”. It is typically written on a score to instruct a particular voice or instrument to remain silent for a whole movement. “Tacet” is Latin for “it is silent”.

15…Pass in soccer but not in football..KICK

37…Where Hillary was a sen…NYS

42…Best pitcher in the rotation..ACE

53…Deflate the overconfidence of..CUT DOWN TO SIZE (giving “fresh-cut”)

3…Flower in a “Sound of Music” song title..EDELWEISS

5…Wood shaper with a broad blade..ADZ

10…Teen hanging out among shoppers..MALL RAT

51…Absorbs with bread, as gravy..SOPS UP